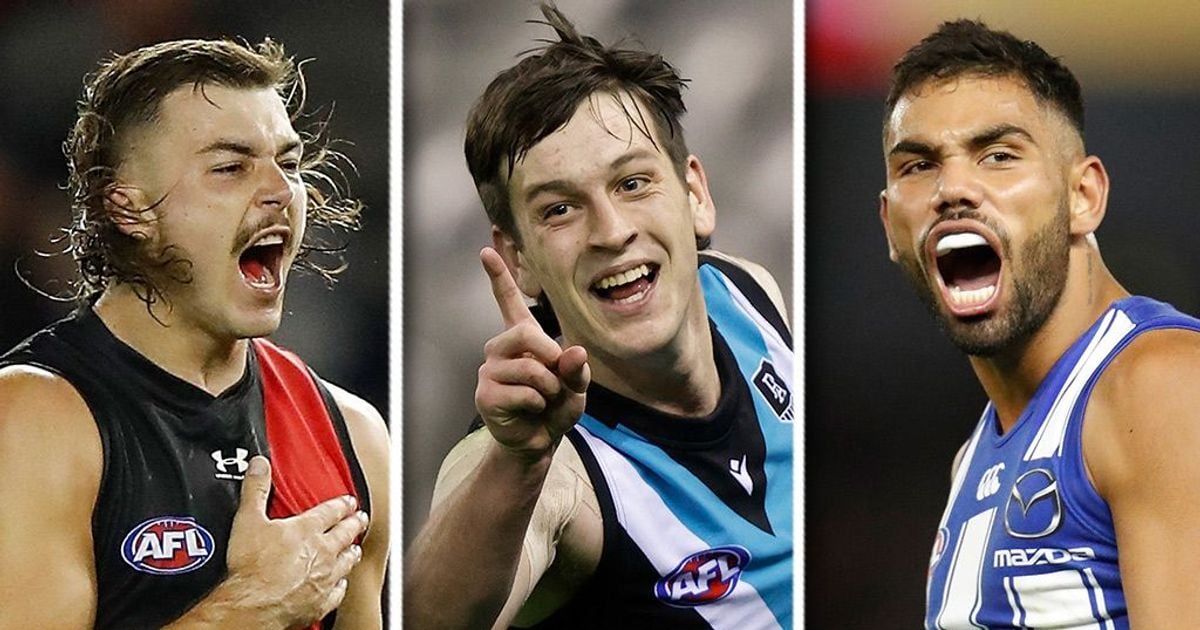 SELECTING a breakout player can make or break your AFL Fantasy season. Whether you are picking them as a starting player in your Classic team or bumping them up your Draft rankings, it is a move that can set you up for premiership glory.

The model for picking a breakout player is looking at players who might have been high draft picks, obtaining a new role within their team, or their time has come to go to the next level after spending three to four years in the system.

The No.2 pick in the 2013 NAB AFL Draft, Giants midfielder Josh Kelly, is a poster boy for this after he took his average from 90 to 113 in his fourth season, while his teammate Tim Taranto (No.2 in 2016) broke out in his third year, improving his average by 22 points to 113.

So … who will be the biggest improvers in 2022 and who will have a breakout season and take their game to the next level?

The most selected player to break out this year is Caleb Serong. Some 24 per cent of coaches are already onboard the former No.8 draftee, who should benefit off the back of the departure of Adam Cerra. Serong has a Fantasy game and scored 118, 117 and 116 in his last three games in 2021 and at times was held back last season with limited time on ground. He ticks every breakout box and is set to explode.

After his bye round, Thomas enjoyed an increase in centre-bounce attendances (CBAs) and his scoring reflected this as he averaged 93 in the remaining 10 games. This included an even more impressive end to the year where he scored more than 100 three times in his final five games.

It was always going to be hard being drafted besides Matt Rowell, but Anderson has come out of the shadows and into the light. He was used in CBAs for the Suns last year, but was he used enough? In games when he attended 70 per cent or more CBAs, he averaged 92. He ended the season averaging 97 in his last three games and as a junior he averaged 108 in the NAB League. A big year is on the cards for the former No.2 draftee.

Leading into his bye last year, Ash was averaging a very impressive 88. The No.4 pick from 2019 averaged 96 as a junior playing in the NAB League and he has already been spoken about to receive more midfield time this year. The question is … is he there to tag or to accumulate?

After averaging 78 in 2020, many thought Butters was ready to explode. Injuries held that thought back last year as he managed to play just 10 games. He is another player rumoured to be receiving more midfield minutes and if he is fit and firing, then he is capable of a 90-plus average this season.

Last season at the Bulldogs, Lipinski only managed nine games at an average of 65 and wore the medical sub vest on four occasions. At Collingwood he will be given more opportunities, in a midfield that needs him, especially if Scott Pendlebury makes his way off the half-back line. The thing is, Lipinski is a former pick No.28 and if he gets a sniff of midfield time, his numbers will spike dramatically.

McInerney’s 20 games last season were played in two halves with two different roles. In his first 10 games he averaged 62, but a switch in roles saw him average 78 in his remaining 10. So what changed? It was a move to defence that saw him take double-figure marks in two games and with Jordan Dawson returning to South Australia, maybe this role will continue in 2022 and be even more fruitful.

In his debut season, the No.5 draftee from 2018 averaged 73 from all 22 games. Since then, due to injuries he hasn’t played out a full season, averaging back-to-back scores of 68. If he can get healthy and find his feet again, then an average of 80-plus isn’t out of the question.

What’s this new role we are hearing about? Darcy Tucker on the ball or a wing? If this is the case, then Tucker could finally have a breakout year. In 2020, Tucker played this role for the first few games averaging 95. He did average 72 in 2019 but if this role is real then Tucker could be even better.

Sam Draper is Essendon’s No.1 ruck and he is entering his third season with only 21 games under his belt. This alone is truly amazing. However, the 23-year-old showed what he was capable of in the elimination final where he scored 121 from 18 possessions and 44 hitouts. We all know ruckmen take time to develop but in Brodie Grundy’s third season his average increased from 61 to 91. Based on ruck averages, Draper currently ranks at No.34. An average of 80-plus would push him close to the top-10 listed ruckman, so make sure you don’t forget his name on that all important Draft Day.