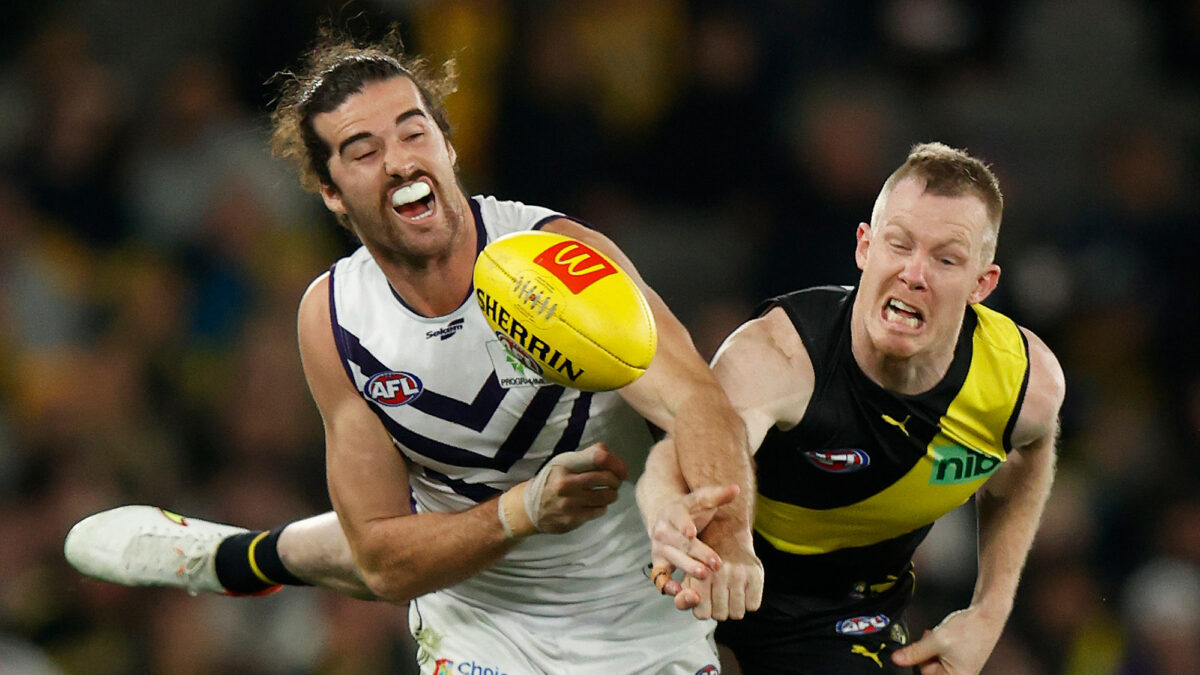 Doomsayers predicting the demise of the game of Aussie Rules football often overstate the problems with modern footy; but if there was ever a game to get the purists rolling in their graves, it was probably this one.

Frankly, a match between the electric, unpredictable, gloriously bonkers Richmond, and the pragmatic, structured and disciplined Fremantle should have been a fascinating contrast between styles, a litmus test for the Dockers and a circuit-breaker for the Tigers after a series of recent losses that threatened their respective spots in the 2022 pecking order.

Instead, barring a riveting patch in the opening quarter where the Tigers tackled like men possessed and the Dockers found any way possible to hold them out, this was borderline unwatchable.

No game more deserved a draw, because neither side deserved to win. Credit must go to the Tigers though for finding a way to bottle a victory but still get two points out of it, because their last three minutes again featured some moments of pure madness.

Games like this are the embodiment of the problems many fans have seen creep into the game over the last decade – the prioritisation of risk-free footy over dash and dare, uncontested marks galore and stuffy stoppages whenever someone actually found a way to break free and get it inside 50, and some quite horrible kicking for goal (most of it coming off yellow and black boots).

Imagine two Muhammad Ali’s trying to rope-a-dope one another, and you’ve got a pretty good idea of how this game looked, particularly after half time. Both teams tired at equal rates, and at no stage did things truly open like we were all praying it would.

The positive is that this match went down to the wire: this was a tight game between two very evenly matched sides, a concern for a Dockers side with higher aspirations and a relief to a Tigers outfit that deserves to play in September despite throwing away two and a half wins in a fortnight.

But neither side really needed a draw at this stage; fittingly, both come out of this match feeling like they lost it. Justice.

The charitable assessment – and the fair one, in truth – is that both sides played well in forcing the other to play quite poorly. Turnovers came about as a result of both pressure on the ball carrier and an expertly set up defensive structure from both teams, and it would be hard for either Justin Longmuir or Damien Hardwick to find fault with what their teams did without the footy.

Richmond went harder and more ferociously at the Dockers than at any other opponent for the season, while Freo absorbed the blows, particularly in the first time, and proved their much-vaunted defence can stand up to a finals-like atmosphere.

But a word of advice: if you’re planning on seeing the replay, watch the first quarter, then skip to the last 10 minutes. You won’t have missed much.

Alex Pearce of the Dockers and Jack Riewoldt of the Tigers compete for the ball. (Photo by Michael Willson/AFL Photos via Getty Images)

We got a taste of the contrast in styles in the first half; the Tigers came out with a menace rarely seen since their 2017-2020 halcyon days, smashing Freo into submission with wave after wave of brutal tackles.

With the Tigers at their best, it’s rarely about the volume of tackles and more about the bone-crushing impact of each individual hug. A number of holding the balls helped them surge to a rare lead – in the free kick count that is, not on the scoreboard – with Noah Cumberland the chief beneficiary with a pair of holding the balls.

Cumberland is a beauty – a long-kickin’, tough-tackling’ lean mean machine, there’s a lot of Jacob Townsend with a 30 per cent skill upgrade about him.

But in keeping with the theme of the night, most of the goals still came about as a result of howlers – this horror kick from Alex Pearce to gift Shai Bolton just about the season’s worst shank.

By half time, the Tigers had eight tackles inside 50 – their average this year is a tick under 10. Had they not squandered chance after chance in front of goal – misses from Ivan Soldo and Noah Balta directly in front the worst of a bad bunch – the match might have been done by half time.

As it was, the Tigers, despite a whopping 31 inside 50s, led by just three points. The Dockers’ trust in their backline was commendable, but it surely can’t have been easy for fans to see yellow and black numbers, just as Sydney had done a week ago, waltz from defensive to attacking 50 with relative ease.

The Dockers’ desire to get an extra number around the contest – necessary though it was, having been smashed out of centre clearances by Dion Prestia and Trent Cotchin but enjoying a similar advantage with more cattle from other stoppages – played right into the Tigers’ hands.

Allow Nick Vlastuin or Dylan Grimes to be the loose man in defence at your peril; they’d either mark or mop up the loose ball, find a target, and the Tigers would attack again.

A whopping 55 per cent of Richmond chains starting in their defensive 50 ended up inside attacking 50 – the AFL average is 21 per cent. With 51 uncontested marks to half time as well, it was mind-boggling the amount of trust the Dockers had in their defensive system holding up under a barrage.

That all stopped after half time: Richmond, having squandered so many leads in the second half – six, in fact, from being in front in the fourth quarter in this year alone – were content to stock numbers behind the ball after the main break, take whatever scraps they could. They stopped attacking with anything like the vigour they displayed early.

The game became a battle of interceptors – Hayden Young in everything up one end, Nick Vlastuin and Nathan Broad up the other. With just four goals total in the second half, it was exactly as boring as you’re imagining if you were lucky enough to not have to watch it.

Freo, too, weren’t particularly aggressive either – given Nat Fyfe limped off with a hamstring injury after taking the Dockers’ only two marks inside 50 for the first half, and with Matt Taberner well beaten by Robbie Tarrant, perhaps this was their best way of grinding out a win.

It made for dull footy, but you could understand the logic.

It’s worth noting as well that things weren’t helped by the absence of each side’s respective spearhead – Rory Lobb for Freo and Tom Lynch for the Tigers. Their presence would at least have helped to neutralise the myriad of long balls sat on the heads of smaller men; it would also have occupied each opposition defence enough to make sure, say, Jack Riewoldt wasn’t being double-teamed at every turn.

There were reasons why the match turned out as it did; that didn’t make it any more fun to sit through, though.

So let’s fast forward instead to the last few minutes, where 2022 Richmond reared its head. At least this time, it wasn’t a case of gifting the opposition the win, but in squandering gilt-edged chances to take it for themselves with scores locked up.

A rare bit of Freo dare – an inside kick to Andrew Brayshaw – was a smidgen too tall; turnover 60 metres out, hit-up ball, Noah Balta mark 40 out. A little over 100 seconds left.

Caught up in the desire to wind down the clock as much as possible, and with the roar of the crowd ringing in his ears, Balta would add his name to the plethora of Tiger bloopers in this strangest of months: he dallied too long, failed to hear the play on call in time, and couldn’t get boot to ball fast enough before a lighting sprint from Michael Frederick saw the shot smothered.

Was that the last chance? Well, as it turned out, no. The Tigers locked the ball in attack yet again, and seemed destined for a snap at goal for a winning point – or goal.

Enter Bolton, who’d had a wonderful if slightly overhyped night by the commentators, electric in spurts but never quite taking control of the game. With exactly 30 seconds on the clock, he swooped on a loose ball, escapes the clutches of Heath Chapman for the first time in about an hour, and… turns back onto his right foot.

Mistake. Luke Ryan wraps him up. Holding the ball. There might have only been a split second to have a snap for goal, but that’s very, very doable for a player of Bolton’s skill. Even a behind would have surely been enough for the win, given how stagnant Freo’s transition had been all night.

The Dockers, to their credit, had a crack at somehow traversing the length of the field for their own winning chance, but the play, as they had for most of the night, was cut short on the wing. From the throw in, the Tigers rallied again, Marlion Pickett winning the ball amid a group of Dockers and somehow fumbling his way into the clear.

A lace-out pass to a leading Cumberland, whose kicking, I remind you, is a sight to behold. According to the official coverage, the siren should have blown by now.

I’m prepared to give a 21-year old a fair bit of slack, especially in just his fourth game; but this was very, very dumb by Cumberland. Playing on might have been excused if he’d been looking to hit up a teammate closer to goal – but again, given the time on the clock and the tied scores, a wiser head would have backed himself to make the distance with the target range tripled, a la Tony Lockett in the 1996 preliminary final.

But look at his eyes; he’s trying to wind up and go for goal. Silly not just because of the time, but because he realised, right as the siren blew, that Jordan Clark was probably going to tackle him and affect the kick anyway.

(Editor’s note: I realised after watching it again that Jack Riewoldt was behind him screaming for him to hold up. Don’t blame Cumberland for not hearing him given the crowd noise, but it confirms my belief that playing on at that moment was the fifth of two options.)

No way this was Cumberland’s fault; nor was it Balta’s. Nor was it Damien Hardwick’s. You could point to a number of tactical, structural and personnel blunders in the Tigers’ losses to Gold Coast and North Melbourne; this felt more like a team perpetually stuck on the rough end of the stick.

I’ll also point out that in a draw to Essendon in 2020, Gold Coast’s Izak Rankine did the exact opposite of Cumberland: with about a minute to go and scores tied up, he marked at about the same range out, and decided to take his 30 seconds and have a ping.

He didn’t make the distance, and got pilloried for not moving it on quickly enough. At every single other time point possible, Cumberland’s call was the right one: his only mistake was not playing the percentages, with the siren sounding at the exact unluckiest point.

It was an end crazy enough, dramatic enough, and bonkers enough to almost make you forget about the sludge fest that had come before.

But hey, that’s the thing about this game. No matter how mutch you have to slog through, there’s always a moment that makes the whole thing worthwhile.