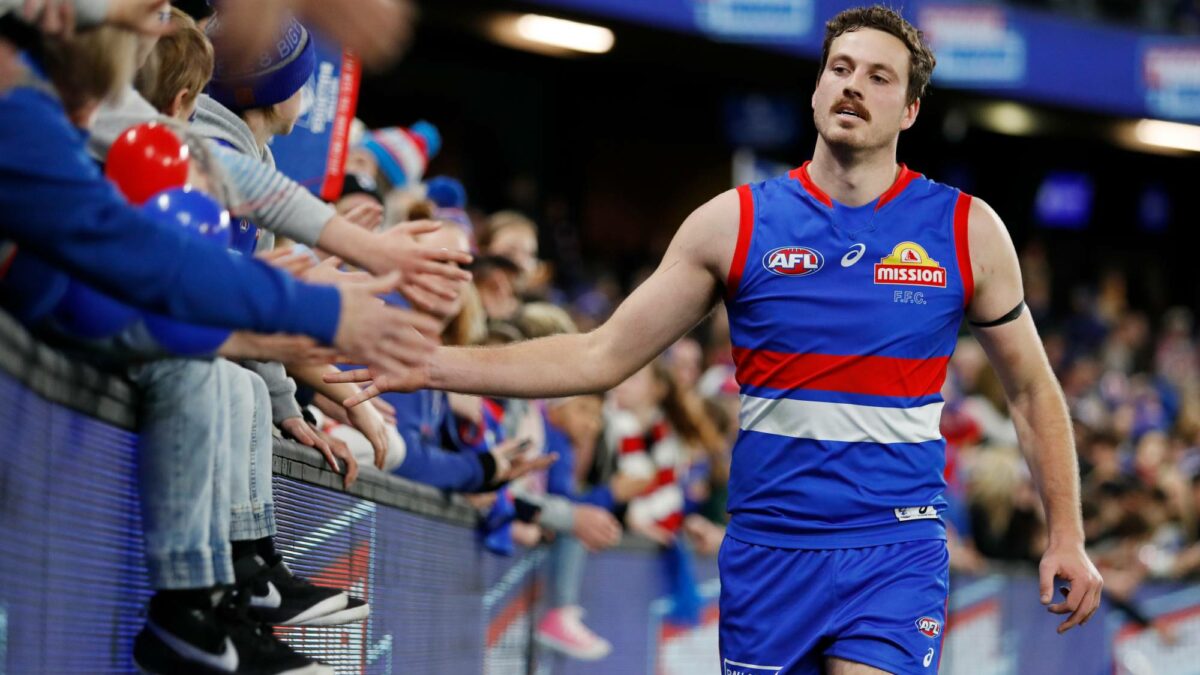 The Western Bulldogs’ finals hopes have received a boost with Zaine Cordy free to play in the must-win clash against Hawthorn after he was cleared of any wrongdoing over his bump on GWS youngster Tanner Bruhn.

Cordy was controversially referred directly to the tribunal for his hip-and-shoulder on Bruhn in the frantic final term of the Dogs’ five-point win at Marvel Stadium on Saturday, with the incident ungraded by the match review officer.

Eyebrows were raised when the incident was sent to the tribunal given Cordy did not make contact with Bruhn’s head in the collision that occurred as the young Giant attempted to chase down Ed Richards.

Former Bulldogs star Adam Cooney said he would “boycott the season” if Cordy was banned for the incident.

Cordy was stationary, lowered his centre of gravity, had both feet on the ground and was within the allowed 5m of the ball when he laid the block.

At Tuesday’s hearing, AFL counsel Nick Pane QC argued Cordy had engaged in rough conduct that was careless, high impact to the body worthy of a one-match suspension.

A medical report submitted by the Giants stated Bruhn was concussed in the collision and would miss his club’s last match of the season.

But after a 75-minute hearing and 25 minutes of jury deliberation, the tribunal disagreed, clearing Cordy to take his place in the line-up to face the Hawks in Launceston on Saturday.

Pane contended Cordy had caused Bruhn’s head to be jolted in a whiplash motion and that his actions were unreasonable because Bruhn was vulnerable, that the degree of force exerted was excessive and that Cordy could have opted to shepherd with his arms open rather than bump.

“My intent was to block for my teammate,” Cordy said in his evidence.

“In this particular instance, we are expected to lay a block and if we didn’t it would come up in review and probably be an ‘RFI’ or ‘room for improvement’. I would also be classed as selfish and not looking after a teammate.

“I made sure I was planted, that my feet were stationary and braced for impact with my shoulder and elbow tucked in. We lock eyes, and he sees me coming. Given the speed at which Bruhn was running, I had to brace myself.

“If I stick my arms out I open myself up to a shoulder dislocation, especially with him going at that speed.”

However, Pane contended Cordy could have minimised the impact and had breached his duty of care for his opponent despite the incident occurring within the permitted 5m zone of the ball carrier.

Legal counsel for the Bulldogs, Sam Norton, successfully argued  Cordy’s actions were expressly allowed by the AFL’s own rules.

“The player does not make prohibited contact,” Norton said.

“The use of the hip, the shoulder, the bracing and blocking is not simply a dinosaur’s, ‘men-will-be-men’ approach … it is an express provision of the laws of the game.

“It’s expressly contemplated that this is an act that will be participated in.”

The Bulldogs must defeat Hawthorn and hope other results go their way to sneak into eighth spot.

Merritt admits Bombers in ‘a bit of mess’

Zach Merrett admitted Essendon looks like “a bit of a mess” at the moment as the drama engulfing coach Ben Rutten swirls out of control.

The 15th-placed Bombers were flogged by 84 points against Port Adelaide on Sunday and will be rank underdogs against Richmond at Marvel Stadium on Saturday night.

Earlier on Tuesday, Rutten said speculation he could soon be sacked was far from ideal but he remains committed to finishing the AFL season. Rutten’s tenure as coach of the Bombers is under intense pressure after a board spill on Monday.

Paul Brasher, one of Rutten’s biggest supporters, has been replaced as the club’s president by David Barham. The new regime has announced an external football department review amid widespread speculation the Bombers will try and lure four-time premiership coach Alastair Clarkson.

“It’s not ideal obviously,” Rutten told the Nine Network as he arrived at Essendon training on Tuesday. “I have got the confidence of the players. I have got a job to do and I am going to coach to the best I can in the next five days.”

“I think I copped a bit of criticism probably last year for holding out a contract about direction of the club and to be sitting here in a bit of mess 12 months later is a bit disappointing,” he said.

“But also I’ve committed long term to the club and I’m really keen and hopeful that in the next two, three, four, five months that they get really clear on what they want to achieve and how we’re going to achieve it and I’ll fall into line massively on that path, but I’m not going to put a date on or hope that it’s exactly right on Tuesday.

“I think we need to show our fans that we actually have a bit of ticker and a bit of spine. I think we have been a pretty easy team to play against all year, it started Round 1 and we’ve been far too inconsistent.

“We’ve got a long way to gain respect back in the industry against other teams and I guess in games is the only way you can do it.”

Kangas still in hunt for Clarkson

The four-time AFL premiership coach looked certain to be heading to Arden St next year but is weighing up late interest from the Bombers.

North want a soft indication from Clarkson about his plans by the close of business on Wednesday, but it is not an ultimatum.

If Clarkson and his management say North remain a chance to land his services then the Kangaroos will continue discussions.

The Kangaroos have been exclusively dealing with Clarkson to be their replacement for David Noble, who was sacked in July.

Adams, who will lead the Kangaroos for the sixth and likely final time this Saturday, would love to see Clarkson return to the club where the 54-year-old began his football career back in 1987.

“I think it would be fantastic if he was to come to our footy club, but if he doesn’t then we’ll get the next best person in,” Adams said on Wednesday.

“Whoever does end up getting the coaching job is going to get a pretty unique group that we feel has got some real talent and can get up the ladder.

“I’m not 100 per cent sure what (Clarkson’s) weighing up but I know he’s got some great people inside this footy club, not just players but our staff in here are fantastic.

“Hopefully it pulls on the heart strings a little bit that he was a former player here and he understands the culture and people within this place.”

Hawthorn great Luke Hodge, who captained the Hawks to three of Clarkson’s four premierships, believes North remain firmly in contention despite fears Essendon could have ruined their plans.

“I’m sitting here saying North Melbourne supporters don’t be stressed, just because he’s saying he’d like an interview, this is ‘Clarko’ doing his due diligence and making sure every stone has been turned,” Hodge told SEN. “Just because he’s agreed to meet with Essendon and have a chat doesn’t necessarily mean he’s more in favour to go there than North Melbourne.”

The AFL has sanctioned five clubs for COVID-related breaches with Sydney apologising after copping a $100,000 fine.

The Swans, Collingwood, Richmond, Brisbane and St Kilda have all been sanctioned for failing to comply with the league’s COVID protocols.

The AFL says penalties were given for breaches including not undertaking a Rapid Antigen Test (RAT) within specified time periods, and uploading an image taken of a previous RAT undertaken by that person or someone else.

Sydney’s $100,000 fine is the heaviest sanction, with $50,000 of the penalty to be included in next season’s soft cap which covers football department spending.

Half of Richmond’s $25,000 fine will be included in the soft cap this year or next. Brisbane and St Kilda have also been reprimanded and given suspended $25,000 fines.

The AFL’s general counsel Andrew Dillon says none of the clubs obtained a competitive advantage from their breaches.

“While 13 of the clubs complied with the requirements, the five clubs failed to comply as required,” Dillon said in a statement on Tuesday night. “The sanctions they have been handed reflect the seriousness that we take in relation to the health and safety of players, staff and the wider community.”

Sydney’s chief executive officer Tom Harley apologised to the AFL and the wider community for his club’s breaches.

“It is disappointing that our club has not fully adhered to these important AFL protocols,” Harley said in a statement.

“This behaviour falls well short of the standards we expect.”

“And we have ensured the importance of this process is now well understood and complied with across the entire football club.”

The AFL’s Dillon said the sanctions came after a league compliance audit.

When deciding penalties, the AFL took into account the number of instances of non-compliance, the time period of the breaches and previous breaches of COVID protocols, he said.