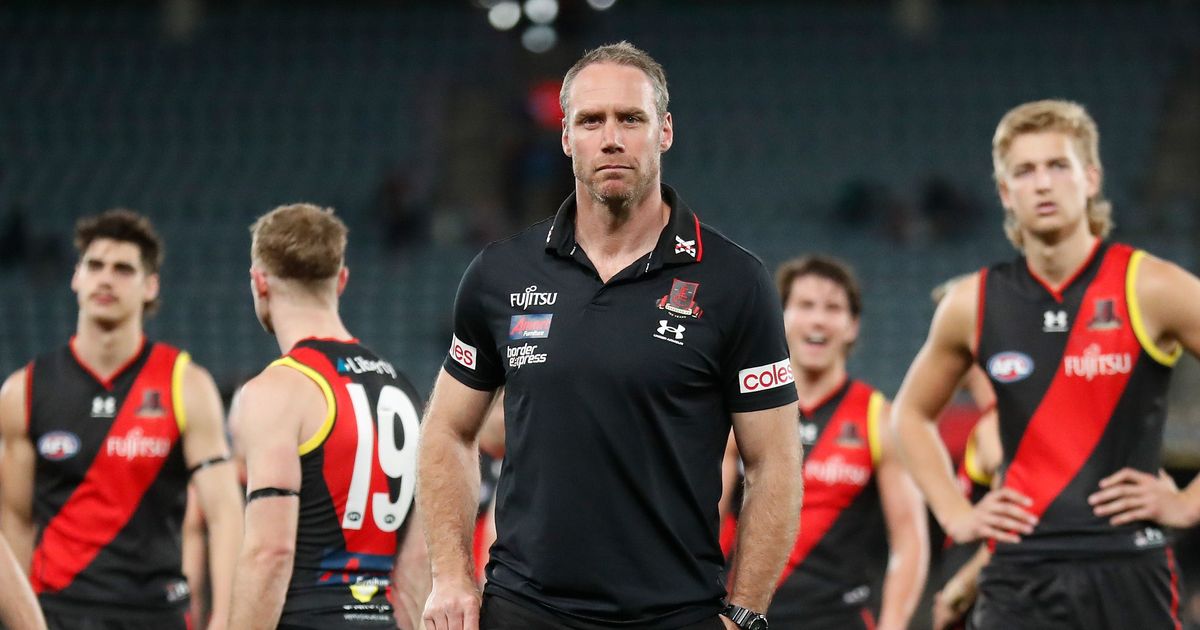 AFTER standing on the sidelines and watching his side concede 23 goals, the most in his 43 games at the helm, Essendon coach Ben Rutten admitted the Bombers’ performance was unacceptable.

Port Adelaide dismantled Essendon on Sunday, running out 84-point winners and consigning Rutten and Co. to a 14th defeat in 2022; a far cry from 12 months ago where they lost 11 games and played finals.

“We’re bitterly disappointed. It was the sort of game where our members and supporters that came to the game tonight or were watching on TV… it’s not the sort of thing that they should have to watch,” a despondent Rutten said.

“It was an embarrassing effort and output from our guys and not something we want to stand for.

“I thought we got ourselves back in the game (by quarter-time), but from the second quarter, it was really poor.”

Rutten said “I haven’t been able to put my finger on it” regarding Essendon’s poor form in Rounds 21 and 22. After a comfortable 48-point win against North Melbourne in Round 20, the Dons lost to Greater Western Sydney by 27 points the following week.

“It’s been last week, as well. The lack of connection on field, the mistakes, the fumbling, those sort of things, which are difficult to pinpoint the reason for.”

Rutten was asked if the Round 22 humiliation shakes his belief in where the club is headed?

“Not in my belief on where we’re going,” he replied.

“It’s not a great result in terms of tonight’s performance, there’s no question about that. It’s about us being really strong and really clear as a footy club and as a group of players about where we’re going and what we’re trying to build.

“It’s never going to be a smooth-sailing, clean progression to becoming a great team, but performances like that are not stuff we can tolerate or accept, and we won’t.

“It really hurts. It hurts me, the players, everyone who’s putting in to try and get us to where we want to get to.”

The Bombers round out their campaign against the in-form Tigers on Saturday night, where Essendon veteran Michel Hurley could play his first senior game of the year.

“It’s important that we do that (finish off strongly). They’ve got a lot to play for and so have we,” Rutten said.

“(Hurley playing) will be a discussion point for us, he got through the game today at VFL level.”

Meanwhile, Port Adelaide coach Ken Hinkley said the Power’s ability to play four quarters of good footy was the most pleasing aspect of the win.

“I thought they were really good,” said Hinkley.

“There’s been times where we’ve played some pretty good footy in patches, but not consistently, and today was a pretty consistent performance and we were good enough and ruthless right until the end.

“To be fair, we’ve had a pretty tough time over the last four or five weeks where we’ve played the absolute cream of the crop in the competition and we haven’t been able to get a result. We’ve been really, really close, but not been able to get the job done, so it was good today to come over here and play here for the first time of the year and put a score on the board.”

Hinkley said Port won’t sweep the disappointment of 2022 under the carpet, but is bullish about the chances of turning the tide next season.

“It hasn’t been the year we wanted it to be and we’re really disappointed. Our expectations were extremely high.

“We know our capability; it gives you some confidence that the talent, the squad and the list we’ve got is very capable.”