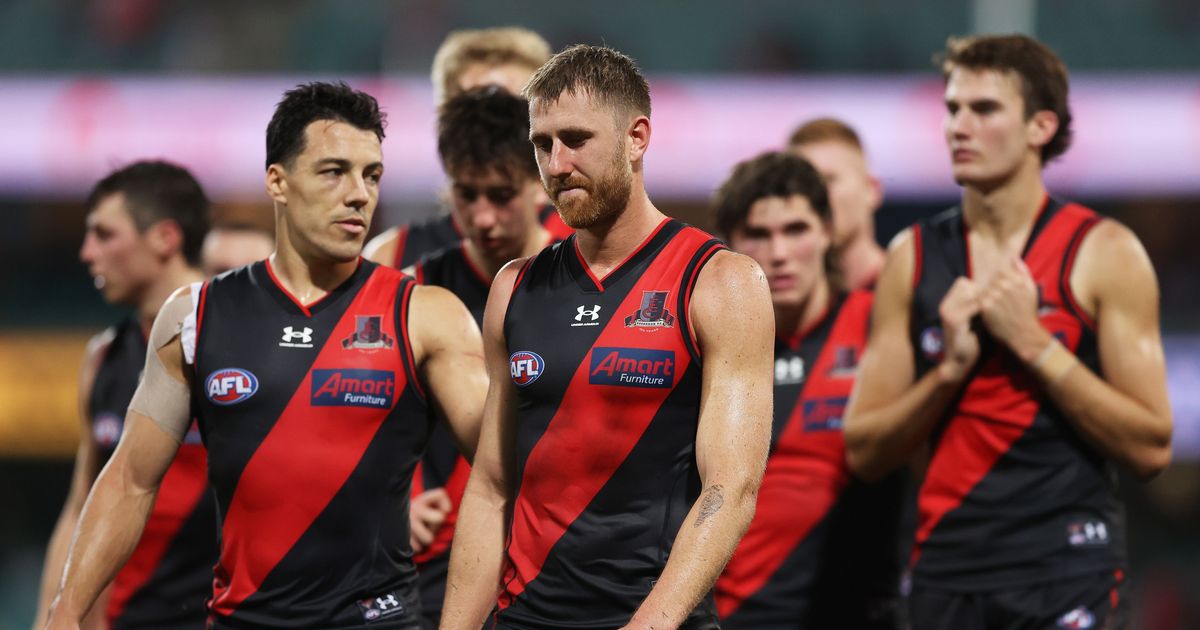 ESSENDON coach Ben Rutten has pointed the finger at his side’s senior players and says they “weren’t up for it” following Saturday night’s 58-point loss to Sydney at the SCG.

The Bombers came into the game with renewed hope after last week’s win over Hawthorn but were never in the contest, slipping to a 2-7 record and sitting 16th on the ladder after nine rounds.

Rutten said his side was “comprehensively beaten” and that the scoreboard flattered the Dons, with Sydney inaccurate in front of goal, kicking 14.21 (105) to 6.11 (47).

The Essendon coach lamented his side’s inability to be up for the contest, losing the tackle count 54-30, having had 24 tackles in the fourth quarter alone last week against Hawthorn.

“The night, the smaller ground, the opposition, it demanded a contested pressure tackling game and we weren’t up for it,” Rutten said.

“(Callum) Mills had 13 tackles individually. He was fantastic. He was one of a lot of Swans that were up for the fight.

“When I look across our squad, we didn’t show the resolve, steeliness to maintain the level that we needed to. There were times we were too easily derailed off our game.

“We found it hard to get back, in particular our more senior players. They’re the ones we need to pave the way and shine the light for our younger guys. They didn’t do that tonight.”

Rutten declined to single out individuals but was pressed of the form of Dylan Shiel, who has been in and out of the 22 this season, and only managed five kicks and 15 handballs for 69 metres gained.

“I don’t want to single players out at the moment, it’s not the time,” he said.

“He’s one of our senior guys that I mentioned who we need in a game like that that requires us to be up for the contest, pressure and tackling.

“We’ve got some inexperienced players, but the senior guys need to be ones to get down and do the work and show the way. We were way off the level.”

Rutten praised Jye Caldwell for an “unbelievably courageous act” after a heavy collision with Tom McCartin when going back with the flight that saw him subbed out due to an AC issue, although the Dons coach didn’t know the extent of the injury.

Chad Warner had a career-high 32 disposals with 12 score involvements while Mills rivalled him for best afield with 29 touches, including 12 contested possessions, seven clearances and a game-high 13 tackles, earning praise from Sydney coach John Longmire.

“When a leader sets himself on being the highest pressure player and goes on the hunt it sets a good tone for the team,” Longmire said.

“I thought that’s as good as I’ve seen him scramble and put pressure on around the ball. If senior players are going to do that, it makes a real difference.”

The Swans also arrested their first-quarter woes, getting the jump on the Bombers with a five-goal opening term to lead by 20 points at the first change.

Sydney, who lost to Gold Coast and Brisbane in their previous two games, had only won two of their eight first quarters this season coming into the game.

“We got it right tonight,” Longmire said. “It comes on the back of some pretty simple stuff.

“Our players played with real energy tonight from the first bounce. They were able to put on enormous pressure and that makes a big difference.

“Consistency of pressure, having 25 more tackles than the opposition and having that many scoring shots, that’s always a good sign. We won the contest.”