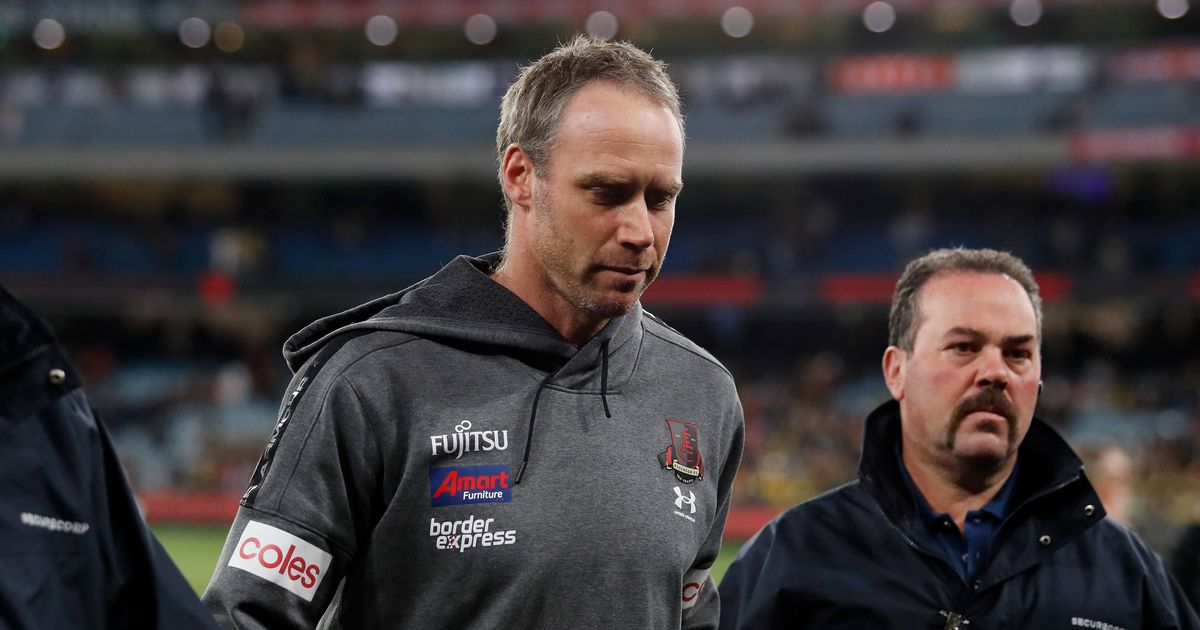 BEN RUTTEN says he “deserved better” than how he was treated by his club this week, but the under-fire coach wants to remain at the Bombers.

The Essendon board will meet on Sunday to make a call on Rutten’s future after their brazen late attempt to snare Alastair Clarkson as coach sensationally backfired this week.

It has heaped enormous pressure on Rutten, who is contracted for next year, with new president David Barham apologising for how it was handled.

Speaking after the Bombers’ season-ending 66-point loss to Richmond on Saturday night, Rutten expressed his sadness at how it had played out.

“It’s been disappointing. I think I deserved better. We need to come together as a whole football club and we need to stick to a plan, put our heads down, bum up and do the work. There’s no other way,” he said.

“There’s no other way for this football club to get back to where it wants to be. And we need to do that. We need to come together as a club, because I think we’re asking too much of our players. Our players are leading this footy club at the moment. We need more.”

Rutten was emotional in the rooms post-match and spoke with directors Simon Madden, Sean Wellman and ex-president Paul Brasher, who will meet without the coach on Sunday as the club plots its next move.

Rutten said he was “committed” to coaching the Bombers in 2023, saying he wanted to “see it through”.

“I know I can make a difference and I know I can take us to where we want to get to,” he said.

The Bombers set a coaching succession plan at the end of 2019 for Rutten to take on the reins from John Worsfold at the end of 2020, with Rutten saying the events of the past week had shown the resolve within his players.

“The way that we stuck together and came through this week was just outstanding.

“I knew the people we had on board were the right people, but you don’t really know until you really get stretched and tested and you have to dig a bit deeper than you normally have to, but the character that everybody showed was first-class and I couldn’t be prouder of our people or our footy club.”

Rutten called on the Bombers to show “stronger leadership” across the club to assist their players to have their best chance for success.

“I love the club. I want to take it forward. We need to come together and unite as a football club because that’s what all successful organisations and successful football teams do. That’s the recipe and there’s no other way,” he said.

Rutten arrived at Essendon after being an assistant coach at Richmond during its premiership era, with Tigers coach Damien Hardwick offering his support to his former lieutenant.

“All I can speak from is my experience with Ben and he’s a wonderful leader of men,” Hardwick said.

“I love what he did with our footy club. I think he is and will continue to be a wonderful senior coach.”

Star forward Tom Lynch will undergo scans on Sunday on a groin issue that saw him substituted out of the win over the Bombers in the fourth quarter after kicking a five-goal haul.