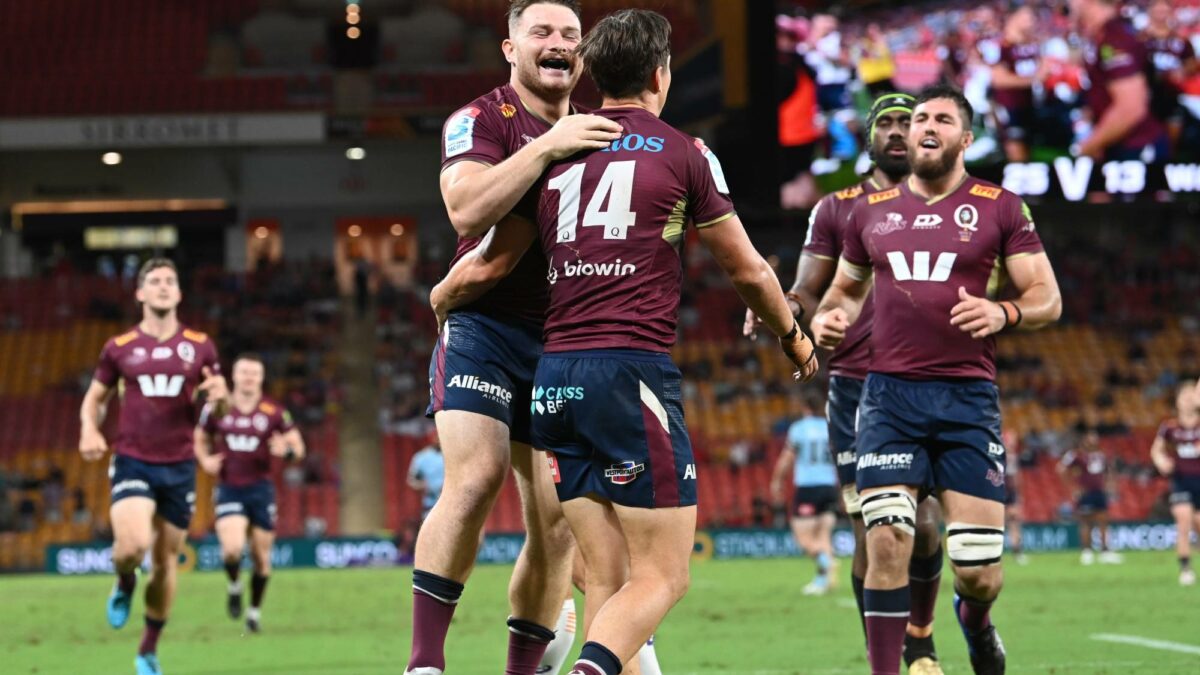 The tale of the Reds’ domination over the Brumbies was told on the pitch immediately after the match. Seen mingling amongst their victorious teammates were Lukhan Salakaia-Loto, Seru Uru, Liam Wright, Dane Zander and Angus Scott-Young; all pack regulars in the Reds’ starting 23, all missing from the action.

Despite their absence, the Reds’ forward pack knuckled down to their work, twice repelling the vaunted Brumbies maul, before overpowering them at scrum. That lift in confidence then manifested itself into breakdown dominance, spearheaded by the irrepressible Fraser McReight.

There were moments conceded to the Brumbies in the first half, and going into halftime down a man, the Reds were arguably flattered by the narrow 6-7 deficit. But once they struck immediately after the break, the Brumbies discipline fell away, allowing the Reds to camp in their half.

The final 21-7 score-line, if anything, undersold the difference between the two sides.

Despite the result, the Reds were by no means perfect. Coach Brad Thorn struck a nice balance afterwards; proud of his team’s decisive winning effort, but frustrated by how they made things difficult for themselves at times, by not being as clinical as any coach wants his side to be.

There were the usual line out wobbles and fumbles in contact and at the base of the breakdown. And despite securing ten turnovers, half of them were wasted through a lack of composure and deficient skill execution.

The crossover games with New Zealand franchises are looming, and this was a timely reminder for Australian rugby that one of the key differences – the ability to transition into attack from turnover ball – is as evident now as it’s ever been.

At one level, this felt like a rare off night for the Brumbies who, it must be said, were missing some key men as well. But the Brumbies’ attacking line-out maul is not quite the deadly force it once was, and a high error rate – such as we saw on Saturday night – is not usually their game.

Despite the Brumbies still shading the Reds on the points table, by virtue of the number of tries scored, it also feels like Australia’s pecking order, uncertain in recent times, has now been firmly established. Bet it all on red.

Third on that list – rising from fifth last year – are the Waratahs, who easily put the Fijian Drua away, on the Gold Coast, 38-14. They’re far from the finished deal, but with Michael Hooper being dusted off and given a cobweb-blowing first outing, they enter the second half of the season with more reason for optimism than anyone would have credited them eight weeks ago.

The side is well balanced, with Tane Edmed relishing the opportunity to show that things aren’t all about Ben Donaldson and Will Harrison. But their renaissance has been built around their pack, in particular Jed Holloway, who again proved outstanding value, a player right on top of all aspects of his game.

The Drua had a tough week, losing coach Mick Byrne to COVID isolation, and their home base to eastern Australia’s big wet, but that was no excuse for loose discipline and patchy defence.

Less patchy was the physical presence of the Fijiana women who, in a top-of-the-table curtain-raiser played in front of a criminally small crowd, inflicted the first-ever Super Rugby W defeat on the Waratahs women, 29-10.

The Fijiana Drua deliberately play without shape; imagine like a sevens team does, but with eight extra players. That makes them a very difficult proposition to defend, especially when impressive, free-running athletes like Raijieli Laqeretabua sweep forward into space.

Across in New Zealand, the Highlanders blew a golden opportunity to tip over arch-rivals, the Crusaders, going down 17-14 in a scoreless second half. Fingers were pointed afterwards at flyhalf Mitch Hunt for a couple of misfires, but credit was due also to some desperate defending and clutch turnovers from Ethan Blackadder and Sevu Reece, which allowed the home side to hang on.

A sunny Sunday afternoon in Wellington delivered a willing and entertaining match, with the Chiefs gradually asserting themselves over the Hurricanes, before two late tries to the home side saw them close to 30-29 and set up a thrilling finish.

Under immense pressure, the Chiefs’ discipline and defensive execution held up, and when Bryn Gatland coolly nailed a 50:20 kick with 90 seconds to play, the points were theirs.

The red card tally mushroomed this week with the Blues’ Nepo Laulala and Caleb Clarke, the Crusaders’ Shilo Klein, Fijian Drua skipper Nemani Nagusa, and the Reds Tuaina Tualima all falling foul of the officials.

It was hard to find sympathy for any of the transgressors, no matter the different circumstances of each case. Nagusa’s looked ugly, swinging his arm into a tackle on Tane Edmed that didn’t need to be made, but ironically, of the five, he has the most chance of success should the Drua choose to fight it at the judiciary.

Referees stray into dangerous territory when, off a couple of looks at a stadium screen, they decree with certainty that direct contact is made to the head. Don’t be surprised if vision emerges which shows initial contact being made with Edmed’s chest, with Nagusa’s arm sliding up into his chin. Still reckless and potentially dangerous, but not exactly the same thing he was banished for.

Without wishing to labour the topic, here are some quick talking points to ponder.

Edmed was allowed to stay on the field for around seven minutes before finally being taken off for an HIA. Slipper, despite reeling out of what looked like heavy contact to his head, wasn’t taken from the field at all.

This is nonsense. A trainer who attends a player on the field is not conducting a concussion test or HIA. That is a 10-15 minute process that occurs off the field.

SANZAAR must ensure that all players involved in incidents like Edmed and Slipper, where contact with the head has been deemed serious enough for a red card to be issued, and where there is reasonable suspicion that a concussion has occurred, be removed immediately, for independent assessment.

That there remains no ‘when in doubt, sit them out’ mantra in Super Rugby, is grossly concerning, if not negligent.

Rugby’s history is littered with northern hemisphere versus southern hemisphere division; some of it bitter, but much of the wrangling reflective of no more than healthy differences around emphasis and style.

But where head injuries and the potential impact on player’s long-term health outcomes, and implication for participation numbers is concerned, this is no matter for the SANZAAR to find itself lagging well behind the north, on the wrong side of history.

What does the spate of red card imply for coaches? Are these just another variable; an impediment to be practiced for? Or are they a trigger to tighten up their player’s discipline, tackle technique, and decision making?

Is the 20-minute red card system working? In the case of Tualima for example, why does his premeditated attack on Slipper warrant the Reds being able to replace him after 20 minutes?

If the only reason is to maintain an equitable contest for the crowd, then that is surely not a reason. If players aren’t getting the message about high contact, is a 20-minute red card proving sufficient incentive for them to change their ways?

Would a 20-minute red card be more palatable if the judiciary was fit for purpose and banned the worst offenders for meaningful periods; not the laughable, token ‘reduced to three weeks for good behaviour and an early plea, with another week off thrown in for attending a remedial course’?

Anyone feeling that Caleb Clarke was hard done by because he had no intent to injure Tomasi Alosio should familiarise themselves with Pat Lambie’s career after he was taken out by a similar challenge from Ireland’s CJ Stander, in 2016.

The sharp-eyed will notice how I’ve deliberately steered clear of the role of referees in all of this. Of course they’re an important part of the issue and the solution, but they’re not responsible for players acting like idiots.

In fact, to single one referee out, take a look at the way James Doleman handled the dismissal of Clarke. Prompt, calm and rational; 100 per cent clear in his decision-making and communication.

As the saying goes, as crazy as all this might seem, things can always be worse somewhere else. During Saturday’s NRL match against the New Zealand Warriors, the Broncos’ Thomas Flegler was placed on report for foul play no fewer than four times!

On the fourth occasion, the referee found it within himself to speak up in a loud voice, so that Flegler would know he was serious, to warn him that this was his fourth time on report and he couldn’t keep doing this!

The final word is reserved for England lock, Charlie Ewels, sent off against Ireland recently for making forceful contact to the head of James Ryan. Rather than feel hard done by, Ewels has since publicly acknowledged his deficient technique, and backed the campaign to minimise high contact in rugby.

Until Super Rugby players begin to take a leaf out of Ewels’ book, the safe bet is to keep betting it all on red.