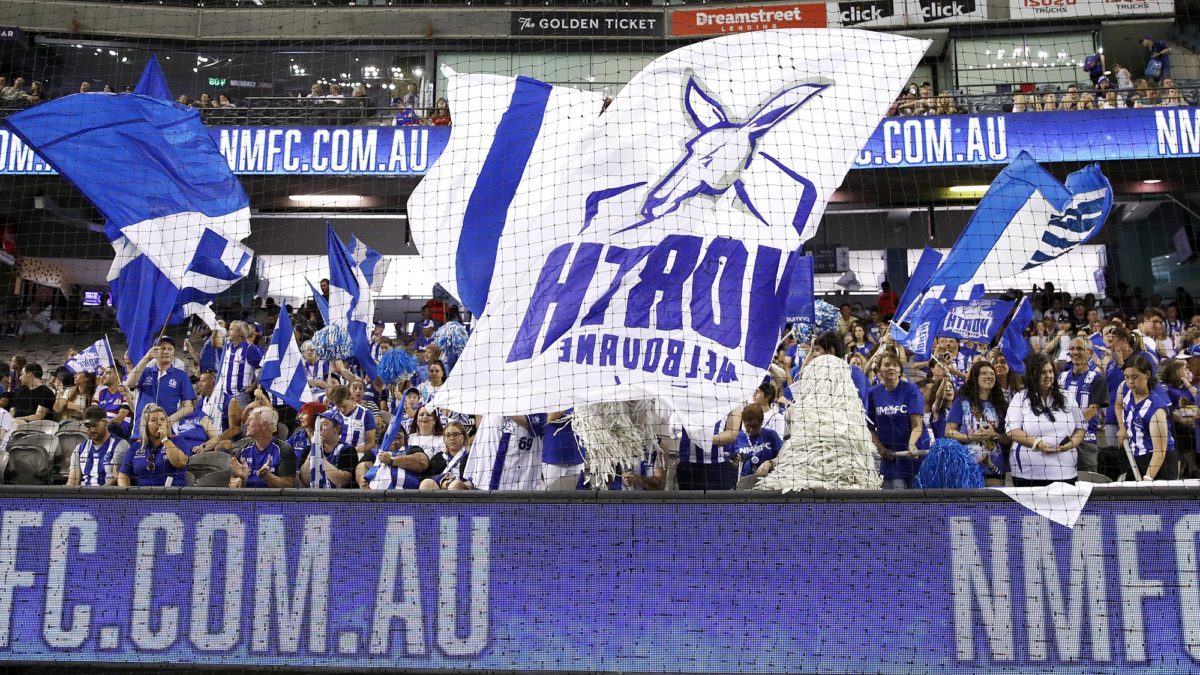 North Melbourne Football Club has been the subject of much attention this year; arguably for all the wrong reasons.

North Melbourne last tasted premiership success in 1999. And since then the club has made finals in nine seasons from 2000 to 2021 inclusive.

However, in both those seasons North finished no higher than sixth. Across this time frame from season 2000 when North finished fourth, that’s been the highest ladder position attained – repeated in 2007 and again the result was a 1-2 finals record with a preliminary final thrashing.

The average ladder position has been 10th.

What North Melbourne had NOT done was to ‘bottom out’. This was considered a path to demise for a club like North. Finances were tight through much of the 2000s.

After being fixtured out of the MCG the Roos were forced into Docklands Stadium without any bargaining power and were subject to a very poor venue ‘deal’. Bottoming out was thought to mean that North would lose membership and would financially collapse.

Nevertheless – the North Melbourne hierarchy were left with little option – after the 2016 capitulation from a 9-0 start to barely a whimper in an Elimination final early exit.

Taylor Garner and Mason Wood were so thwarted by injuries that despite his obvious talents – Garner retired at the end of 2021 with just 49 games and a physical wreck after eight years in the system.

Wood – took six years to get to 50 games only to mentally fall apart in 2020 – unable to take a kick at goal from 30m out directly in front.

A fresh start was needed. The likes of Ben Jacobs who in 2015 had elevated to arguably the premier ‘shut down’ mid in the competition; missed all of 2017 and by 2018 was done with just 90 games to his name. In a perfect world – at age 30 – he would be a midfield leader of the current team.

Majak Daw also – with a lot of investment of time – in 2018 had elevated to be an excellent defender. We know that story – no fault of the club. 2018, 9th place – and that was it. So – rather than a generation of leaders there was a void.

North had tried to lure the likes of Josh Kelly, Dustin Martin and Jordan De Goey. All that had happened was that their clubs faced pressure; paid extra and arguably other players slipped out the other end. After

Bottom out it was to be. Why not? Other clubs had done it and surged back to sustained success. Rather than the odd dip into a top 6 or top 8 draft pick and continually competing for 7th to 12th; North instead would bottom out and assemble a list with which to have a serious crack.

External to the club the biggest factors on the capacity of a club to bottom out and rebuild through the Draft has been the impact of Covid. Especially in Victoria with a lost season of VFL in 2020 and a much reduced 2021 VFL season.

Combined with the soft cap limits on coaching spend along with relocating to Hubs and training in smaller numbers in bubbles within hubs – the result was a disaster for a club at the bottom of the ladder seeking to develop a large group of new draftees.

The AFL introduced the 6-6-6 rule in 2019. This rule more than anything has made it very hard for outgunned teams to hold back the flood.

The embryonic Giants and Suns sides had the capacity to drop an extra or two into defence. Just as teams for decades have done in particular when kicking against the wind. However – in their wisdom the AFL has arguably sanitised the game with the 6-6-6 rule.

And in season 2022 we’ve seen North Melbourne exposed massively via this rule combined with the absence of Ben Cunnington in the midfield; indeed for the first two months also in the absence of vaccine hesitant Jed Anderson. That left North with Hugh Greenwood and Jy Sympkin as the only players aged 24+ in the mid and with less than 200 games between them.

This week (Round 19) Greenwood reaches 100 games and Anderson will before the end of the season.

Around the club – there has been obvious instability around coaches; and recruiters. I won’t go into that here other than to say that – with the impact of Covid – clearly the more settled clubs/teams have been advantaged.

That as well as clubs outside of Victoria where Fremantle and Adelaide as examples have been able to play their developing players in the WAFL and SANFL competitions that have largely continued barely effected by Covid.
What’s gone right?

Thankfully membership and finances have held together. Attendances are another story. Clubs need to trade on hope so a change of coach; and another #1 or #2 draft pick can add and sustain hope. Retention of the young talent currently is another key to sustain hope.

Priority pick or not?

Along the way there have been a number of clubs who have scraped the bottom of the barrel. Even Hawthorn – in a 16 team competition from 1995 to 2006 had an average ladder position of 11th for 3 finals ‘campaigns’ and 3 wins from 6 matches.

As it was – in the midst of that the Hawks made the 2001 Preliminary final; they also picked up Luke Hodge in the 2001 National Draft – having traded with bottom placed Fremantle. St Kilda (15th, 4 wins) and the Eagles (14th, 5 wins) both were also granted priority picks and so the 2001 ‘Super Draft’ was blighted by three priority picks going 1, 2 and 3 with Hodge, Luke Ball and Chris Judd. 100% generational players.

Both sides were granted picks along with the Bulldogs (14th, 5 wins) – and so the 2004 draft was again blighted by 1,2 and 3 going as priority picks. The players were Brett Deledio, Jarryd Roughead and Ryan Griffen.

The current priority pick system has changed massively. And on all counts North Melbourne deserve a priority pick. It seems odd that they are being attacked for it.

Part of the presentation to the AFL includes that the player cuts at North are no more severe and mostly less than other clubs (Carlton, Gold Coast and Brisbane) who have been assisted in recent years.

The main question for North Melbourne currently is as to whether a priority selection or two should be used on drafting in young talent or to trade for ready made players. North already have a ‘generational’ player developing in Luke Davies-Uniacke.

If able to retain and further develop Tarryn Thomas, Cam Zurhaar and Jason Horne-Francis then there is a real nucleus of a successful side.

If North finish last this season, it will be interesting to see whether another #1 draft pick is brought into the fold. Looking at Carlton the benefit of both Jacob Weitering and Sam Walsh (both #1 picks) is obvious.