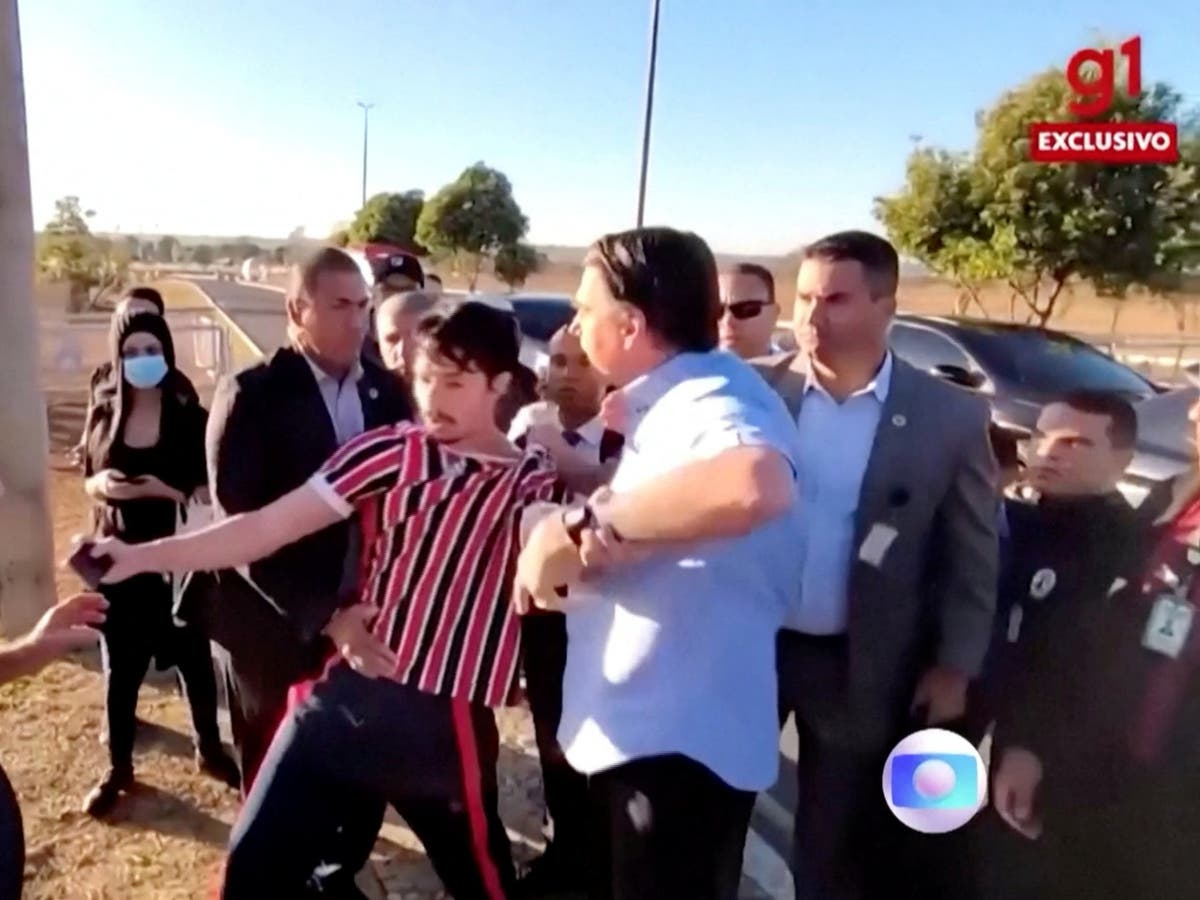 Brazil’s president Jair Bolsonaro has grappled with a heckler and tried to snatch his phone, days after the presidential election campaign kicked off.

The incident underscored the possible challenges for the sometimes quick-tempered leader to stay disciplined on the campaign trail.

As Mr Bolsonaro spoke to supporters outside his residence in the capital city Brasilia, social media influencer Wilker Leao used his phone to film himself repeatedly shouting at the president, calling him “coward”, “bum” and the “darling” of a pork-barrel faction in Congress.

Mr Bolsonaro first entered his car, but then re-emerged and grabbed the man’s shirt and forearm while reaching for his phone. Security guards pulled Mr Leao away.

The presidential campaign that kicked off on Tuesday is expected to be an uphill battle for Mr Bolsonaro, who trails former president Luiz Inacio Lula da Silva in all polls ahead of the 2 October first round vote.

A journalist from news website G1 published a video of Mr Leao’s comments and the subsequent altercation.

“Don’t film this, don’t film this,” Mr Bolsonaro told his supporters as Mr Leao was held by presidential security. “It is his right (to protest), but he was being impolite.”

Four minutes later, security allowed Mr Leao to return to the scene and chat with Mr Bolsonaro about politics. The two have spoken several times before, without incident.

“You can talk to me as much as you want,” Mr Bolsonaro told Mr Leao. They spoke for about five minutes before Mr Bolsonaro decided to go back to his car and leave.

Mr Bolsonaro has had earlier confrontations, often with the press.

In 2020, he told a journalist “I want to punch you in the mouth” and once suggested he would like to shoot supporters of the rival Workers’ Party.

Mario Sergio Lima, a senior Brazil analyst at Medley Advisers, said the incident will weigh against Mr Bolsonaro at a moment when he could have started his campaign in a more positive tone to pick up support.

“It was a very bad sequence for the president in electoral terms. It shows a lack of restraint and it is likely to be used against him by his opponents’ campaigns,” Mr Lima told the Associated Press.

Later on Thursday during a visit to the city of Sao Jose dos Campos, Mr Bolsonaro got upset with journalists during a news conference and with his security team trying to calm him down during the questioning.

The president did not address either of the incidents during his weekly live broadcast.