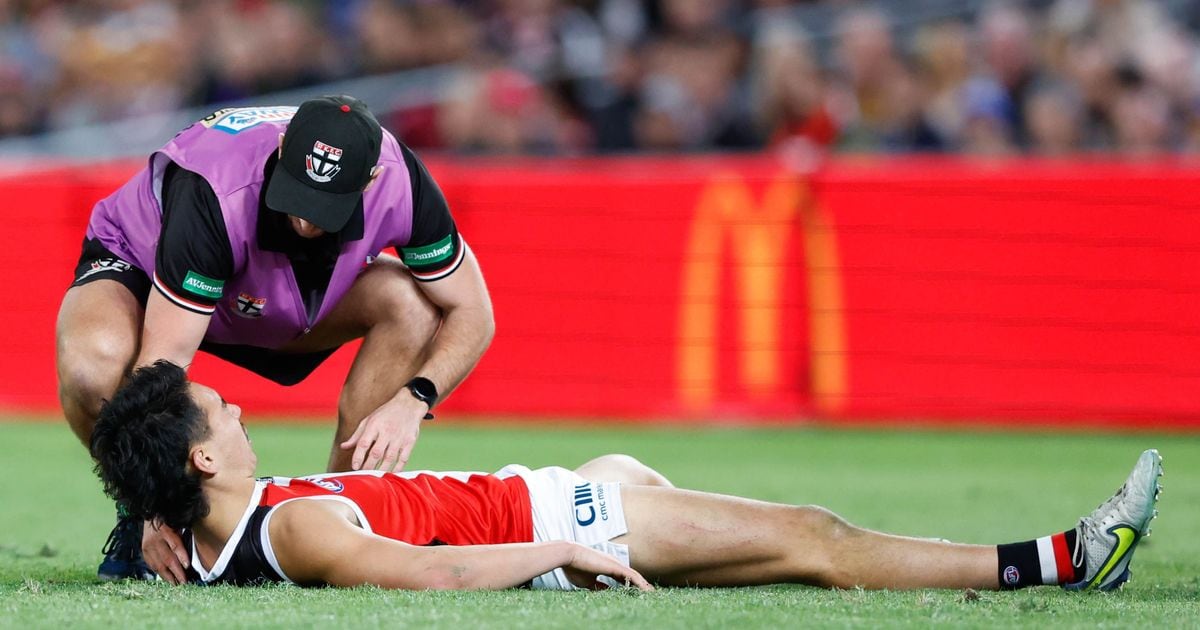 ST KILDA coach Brett Ratten described Saturday night’s 21-point loss to Brisbane as a “disaster” on the injury front, after the Saints finished with just two fit players on the bench.

Mitch Owens was on the wrong end of a head clash with Lincoln McCarthy just before half-time and did not return after failing a concussion test.

Shortly into the third quarter, it was Dan McKenzie who suffered the same fate, landing heavily in a marking contest before groggily leaving the field.

And it got worse just before the last change when Zak Jones left with a hamstring problem.

Ratten said all three would be unavailable to face Essendon next Friday night.

“From an injury front you say it was a disaster,” he said.

“Owens the head clash, then McKenzie’s one, I don’t know how that will stack up, I’ll let others work that one out.

Ratten said the Saints had some quality personnel knocking on the door, with Jack Billings and Hunter Clark impressing in the VFL and Nasiah Wanganeen-Milera also available.

Aside from the injuries, the Saints were overpowered after half-time, conceding seven goals to three as the Lions stormed home in front of their home crowd.

Ratten said his team would take confidence from pushing an established contender, but had work to do.

“I thought we showed some real glimpses, but we need to be better than that,” he said.

“We had moments in the game, moments where we played really well. We just didn’t have enough of them.

“We got to about 10 minutes in (the last quarter) and thought ‘we’re just hanging in here’.

“There was a couple of little opportunities, but then it just became an avalanche at the end and we were just hanging in there with 10, 12, 14 minutes to go.”

Meanwhile, Brisbane coach Chris Fagan was delighted with the Lions’ ability to bounce back from a short turnaround after losing to Fremantle last Sunday.

He described the victory as hard fought and “gutsy”, overcoming a 12-point half-time deficit.

They now go into the bye with a 10-3 record and face premier Melbourne in round 15.

“That’s all we are trying to do, trying to win as many games as we can and qualify (for finals),” he said.

“We haven’t done that, 10 wins doesn’t get it done, so we’ve got some big challenges coming up.

“There’s definitely improvement in us, we are not playing the best football that we can play at the moment, but it’s a tough competition.”

The victory came at a cost, however, with captain Dayne Zorko succumbing to a hamstring injury during the third quarter, while Darcy Gardiner left the field for a back-related problem.