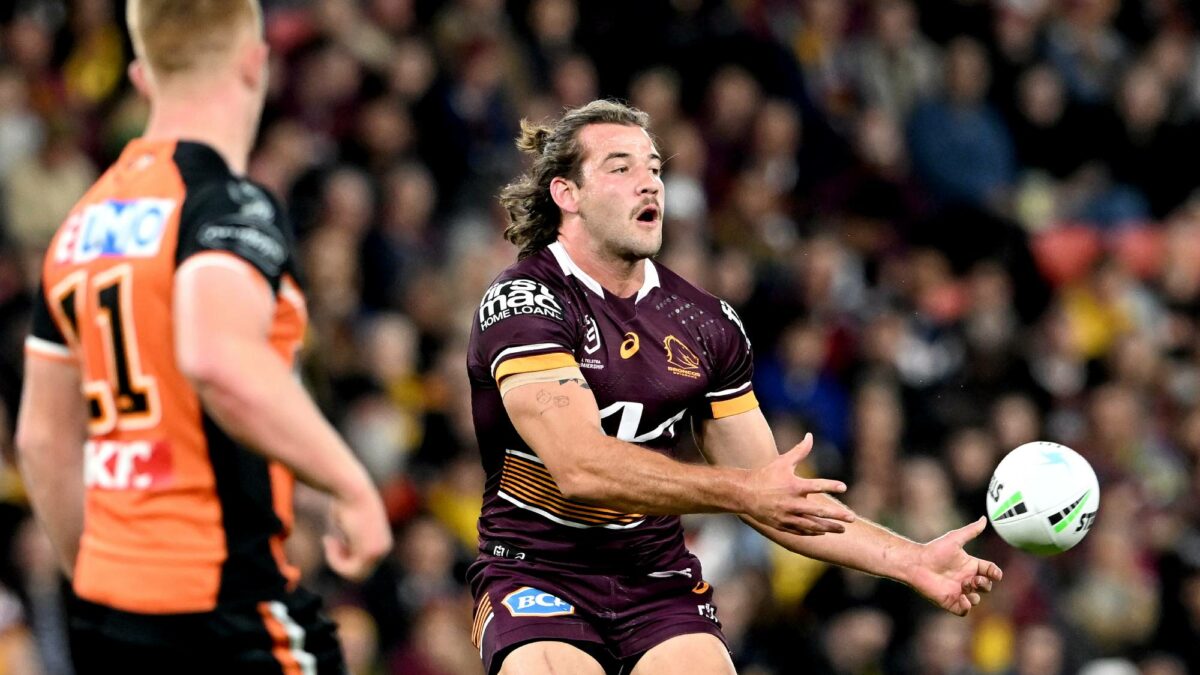 Brisbane lock Patrick Carrigan will not play again until Round 25 after being rubbed out by the NRL judiciary on Tuesday night for four matches.

Broncos coach Kevin Walters did not bother selecting Carrigan for Thursday’s clash with the Roosters after the Maroons forward was referred straight to the judiciary for the hip-drop tackle which broke Jackson Hastings’ leg during the Wests Tigers’ upset win at Suncorp Stadium on Saturday.

NRL legal counsel Patrick Knowles referred to a medical report in the hearing which detailed how Hastings had suffered a “very serious injury” in the form of fractured fibula and syndesmosis damage which also needed surgery.

Carrigan, who entered a guilty plea before the hearing, could have appeared via video link but chose to travel to Sydney to front a panel of former players Dallas Johnson and Henry Perenara as well as judiciary chairman Justice Geoff Bellew.

“I am a little disappointed with the result,” Carrigan said afterwards. “I certainly didn’t have any intent or malice with what happened, but I am obviously aware Jackson will miss a bit of footy.

“I just wish him all the best with his recovery. My focus now is to be as supportive as I can for the Broncos and for the next four weeks help them out.”

The Wally Lewis Medal winner’s legal counsel, Nick Ghabar, said Carrigan was careless in making the tackle but two teammates had contributed to Hastings being bent back in a dangerous position.

Ghabar argued for a two-match ban while the NRL prosecutor had requested the panel impose a suspension of 5-6 matches.

Penrith will be without both their star playmakers until the finals while the Eels won’t have Mitchell Moses on deck for at least a month.

Moses’ broken finger means Eels coach Brad Arthur needs a new on-field general with his son Jake Arthur named in the No.7 jersey despite speculation that captain Clint Gutherson could be switched to the halves alongside Dylan Brown with Hayze Perham promoted to fullback.

Knights prop David Klemmer was issued with a show cause notice relating to “on-field disciplinary matters” in Sunday’s home loss to the Bulldogs. He was not selected for Sunday’s road game against Wests and has been stood down until the matter is resolved, according to a club statement.

Cronulla have handed an NRL debut to Kade Dykes at fullback with Will Kennedy out for six weeks with an ankle injury when the Sharks host the Dragons this Saturday.

The son of playmaker Adam and grandson of former back-rower John, Dykes will become the NRL second third-generation player in the space of two weeks after Zac Fulton‘s Manly debut last week.

Elsewhere, South Sydney will be without Tom Burgess for Saturday’s Sunshine Coast fixture against the Warriors after he was hit with a grade-two careless high-tackle charge. He avoided the chance of a two-game ban if he had contested the charge.

Manly debutant Alfred Smalley has entered an early guilty plea to cop a one-game ban for a high tackle on Roosters rake Sam Verrills while Egan Butcher is also out of Round 21 after taking a grade-two careless high tackle charge for a hit on James Segeyaro.

The Sea Eagles have the seven players avalable who boycotted last week’s game over the “inclusivity jersey” for Women In League Round: Josh Aloiai, Jason Saab, Christian Tuipulotu, Josh Schuster, Haumole Olakau’atu, Tolutau Koula and Toafofoa Sipley. Schuster has been named in the reserves while Aloiai is out injured with a knee problem.

Kiwi international Brandon Smith will return from a three-game ban for abusing a referee when the Storm host the Titans on Friday night with mid-season recruit, Wests Tigers winger David Nofoaluma, lining up for Melbourne.

Smith called referee Adam Gee a “cheating bastard” during the Storm’s 28-6 loss to Cronulla and was subsequently outed for his dissent.

Cowboys winger Kyle Feldt will be out for two weeks after twinging his hamstring against the Dragons.

All squads will be officially announced at 4pm AEST.

Roosters: Egan Butcher is out suspended while Lindsay Collins is unlikely to play again for at least a few weeks after a heavy conussion in last Thursday’s win over Manly. Veteran prop Siosiua Taukeiaho is due to make a comeback after a facial fracture to bolster the pack. Jared Waerea-Hargreaves avoided a ban after copping a fine for his forearm to the head of Sea Eagles debutant Zac Fulton.

Broncos: Patrick Carrigan’s suspension for his hip-drop tackle on Jackson Hastings leaves a sizeable vacancy in the pack. Kobe Hetherington replaces him at lock. Young winger Selwyn Cobbo (concussion) is set to make his first appearance since Origin III.

Storm: After signing last week for the rest of the season, Wests Tigers winger David Nofoaluma is set to make his Melbourne debut. Brandon Smith returns from a three-game ban for abusing a referee. Tyran Wishart replaces Nick Meaney (shoulder) at fullback.

Titans: Pressure is building on the Gold Coast to jag a few wins to avoid the wooden spoon after they dropped to last in Round 20 following the Tigers’ upset win over Brisbane. Halfback Toby Sexton has been dropped with Jayden Campbell back at fullback, AJ Brimson returning to five-eighth and Tanah Boyd getting the halfback duties.

Sea Eagles: The Sea Eagles will welcome back six of the seven players who boycotted last week’s game over the “inclusivity jersey” for Women In League Round: Josh Aloiai, Jason Saab, Christian Tuipulotu, Josh Schuster, Haumole Olakau’atu, Tolutau Koula and Toafofoa Sipley. Debutant winger Alfred Smalley has been banned a week for a high shot. Aloiai has been sidelined by a knee issue.

Eels: Mitch Moses has a broken finger and will be out for at least a month. Jake Arthur is the new halfback.

Rabbitohs: South Sydney will be without Tom Burgess for Saturday’s Sunshine Coast fixture against the Warriors after he was hit with a grade-two careless high-tackle charge. He avoided the chance of a two-game ban if he had contested the charge. Taane Milne replaces Jed Cartwright (hamstring) at centre. Blake Taaffe has been named to return to South Sydney’s bench with Kodi Nikorima missing.

Warriors: Five-eighth Chanel Harris-Tavita may have played his last game for the club as he has a knee injury and is taking a sabbatical from the sport next year. Hopefully last weekend was not the last time he’ll be seen on an NRL field. Bayley Sironen (eye socket), Jack Murchie (personal reasons) and Aaron Pene (illness) all return in a new-look back row. Jazz Tevaga is out for the rest of the season with a shoulder injury, Wayde Egan has switched to five-eighth with Freddy Lussick the new hooker.

Raiders: Veteran winger Jordan Rapana is back after serving a two-game suspension, his third for the year, replacing Albert Hopoate.

Sharks: Will Kennedy’s absence with an ankle injury opens the door for Kade Dykes, son of Sharks legend Adam Dykes, to make his debut at fullback.

Dragons: Their heavy defeat to the Cowboys on Sunday means the 11th-placed Dragons need to win this game or their finals hopes will be all but over. Coach Anthony Griffin has stood by the same 17 which went down to North Queensland.

Bulldogs: Second-rower Raymond Faitala-Mariner could be back from a rib complaint to boost the pack for the rejuvenated Canterbury side. He is in the reserves among an otherwise unchanged squad.

Cowboys: Star lock Jason Taumalolo has taken the early guilty plea to a grade-one shoulder charge offence and has been fined $3000 rather than risk a suspension by challenging the judiciary. Veteran winger Kyle Feldt will be out for two weeks after twinging his hamstring against the Dragons. Hamiso Tabuai-Fidow has been elevated into the starting side.

Tigers: Jackson Hastings won’t play again until 2023 after the lock had his leg broken in the closing stages of Saturday night’s upset win in Brisbane after a hip-drop tackle by Patrick Carrigan.

Knights: Wingers Edrick Lee (foot) and Hymel Hunt (shoulder) sat out last weekend’s loss to the Dogs while Kurt Mann is closing in on a return from a leg complaint. Newcastle will be without David Klemmer (disciplinary reasons) for their clash against Wests Tigers while boosted somewhat by Bradman Best returning at centre.