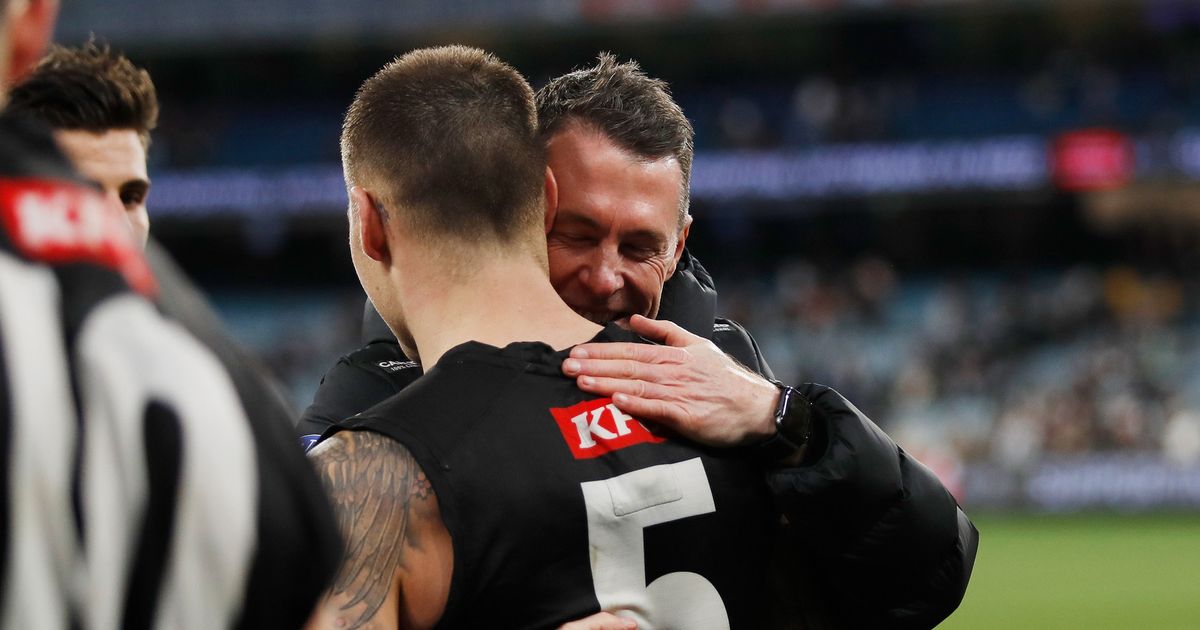 COLLINGWOOD coach Craig McRae admits he was more hopeful than confident Jamie Elliott would kick the miraculous after-the-siren goal that handed the Pies a ninth-straight victory on Sunday.

After Bomber Harrison Jones failed to seal at one end, Elliott had the opportunity to become a hero when he marked on the boundary line, 45m out from goal.

With the Pies trailing by two points, the siren sounded during Elliott’s approach. His kick was an absolute beauty and lifted Collingwood to an epic four-point win against its old rivals in front of 72,402 fans at the MCG.

“That had to be the lowest-percentage shot, 50m out from the boundary, to win the game, so it’s pretty exceptional execution, isn’t it?,” McRae said.

“I’m a bit speechless, to be honest. I hope there’s not footage of me on the bench when the siren goes. I really don’t know what to say to that, that was unbelievable.”

CLOSE SHAVE Pies win a thriller after the siren

Incredibly, Collingwood has won eight games by 11 points or less this season and its past five victories have been by a total of 22 points (an average of 4.4 points).

McRae revealed the Pies maintained belief at three-quarter time when trailing by 14 points.

“I said to the boys at three-quarter time, ‘we’ve been here before, here we go; this is what we do’,” he said.

“Yeah, we do (train for tight finishes). I’m not sure we train for shots after the siren or from the boundary, but we do put a lot of time into it. We do train scenarios a lot, we do match play once or twice a week and the last two minutes of that is all scenario-based…two minutes to go, you’re three points behind, what are we doing? We’ve got method, I just wouldn’t mind not being in that position.”

Despite their nine-game winning streak, which has helped them to fourth on the ladder, McRae claims the Magpies have plenty of room for improvement.

“I feel like we’re just a little bit off in a lot of parts of our game. They got a lot of goals from clearances today. Our pressure, too, in parts of the game; they took it a little bit away with uncontested marks,” McRae said.

“I thought we were a bit passive in terms of our ball movement. You could see it shift with Jack Crisp in the last quarter, he played on and something happened.

“We’ve got some work to do, we’re not shying away from that.”

The Pies host the Power at the MCG on Saturday afternoon, and have Melbourne, Sydney and Carlton in the final three rounds.

Meanwhile, Essendon coach Ben Rutten lamented the Bombers’ poor start and some costly misses late in the game. The Bombers were slow out of the blocks, conceding six first quarter goals, while failing to kick one themselves.

“It’s bitterly disappointing. We put ourselves in a great position to win the game…(it was) a kick after the siren. We gave them a 37-point head start at quarter-time, so we had a bit of ground to make up, which we were able to do, but ultimately, we can’t be doing that,” Rutten said.

The Bombers regrouped after quarter-time and piled on five goals to one in the second term, before racing out to a 21-point lead in the last.

After Matt Guelfi kicked the opening goal of the fourth quarter, the Bombers kicked three points for the remainder of the game, with Harrison Jones hitting the post inside the final minute when he had the chance to seal the deal.

“I’m proud of our efforts and the way we attacked it and approached the game. I think the boys are starting to get more and more belief and confidence that our game, when we’re playing it, it’s not perfect but we’re in it with some of the better teams,” Rutten said.

“We kicked one from four shots on goal in that last quarter. The opportunities were there, we just weren’t able to take them.”

Essendon has a round 20 date against North Melbourne at Marvel Stadium on Sunday afternoon.