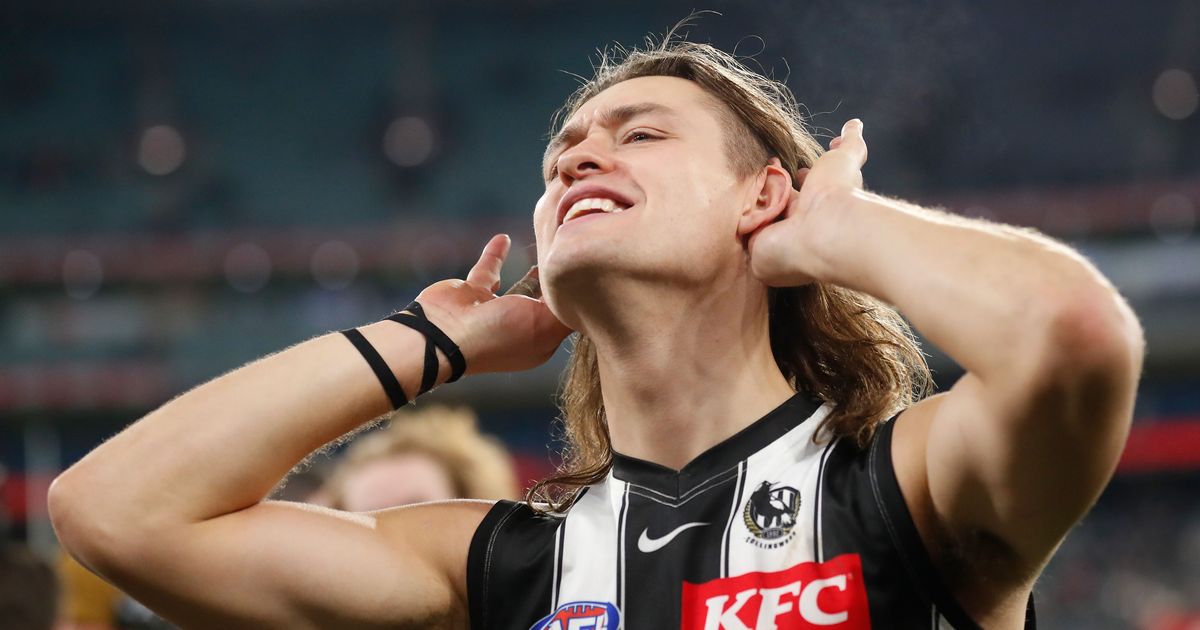 WHEN his left knee hyperextended against Gold Coast in round 16, Darcy Moore thought his season was over. His next 12 months flashed before his eyes as he was helped off Metricon Stadium in the dying minutes of the five-point win.

The 26-year-old was forced to endure two restless nights before he was cleared of a dreaded anterior cruciate ligament tear on the first Monday of July, with scans revealing bone bruising and a capsule strain, rather than structural damage.

Moore still can’t believe he only missed one game – especially after missing the second half of last season with a PCL injury in his right knee – but if the scans went another way, Collingwood may not have secured a second chance in September.

The Magpies have had to navigate a season where Jordan Roughead retired mid-year after battling injury, where Mark Keane remained in Ireland, where Charlie Dean only managed two VFL appearances due to a foot injury and where Jack Madgen has battled his own injury concerns. The loss of the All-Australian might have been a bridge too far.

But now Moore and the Magpies return to the finals when they face Geelong in Saturday’s qualifying final at the MCG, 12 months after finishing second last on the ladder with just six wins on the board.

“I just remember coming down and landing and it was really slippery and my foot just didn’t slip at all, it just got stuck in the ground and wouldn’t move. In an instant I felt something move where it shouldn’t have. You definitely think what your next 12 months will look like you’re getting stretchered off an AFL game,” Moore told AFL.com.au this week.

“The doctor was pretty confident as soon as I got on the table. He said it was quite stable but you obviously never really know until you get a scan, but that made me feel a little bit better straight away, then I got an answer the next day.

“It is a really indescribable feeling of relief. Not much has to go wrong for you to miss 12 months in the game; you hear so many stories across the League where players have got so unlucky so many times and missed so much footy. You count your blessings after that. I managed to only miss one game so that was amazing.”

Under the guidance of former Brisbane coach and triple premiership defender Justin Leppitsch, the Magpies’ defence has established a reputation of fighting above its weight division in 2022.

Brayden Maynard was rewarded with a maiden Therabody AFL All-Australian blazer last Wednesday night and Nick Daicos claimed the NAB AFL Rising Star award after being named in the 44-man squad, John Noble, Isaac Quaynor and Jeremy Howe have all been ultra-reliable again, while Nathan Murphy has played in 12 wins since returning to the senior side in round 10.

“We’ve really grown into the season, that’s for sure. Nathan came in around the midway point of the year and was very much our lucky charm – we won 11 in a row after he came in. We’ve just got a good mix,” Moore said.

“We’ve got guys like Isaac Quaynor and John Noble and Bruzzy [Maynard] who have played 50, 60, 70 games together. When you’ve got that shared experience, it certainly helps. Jeremy Howe, as well, who is an old head and helps to straighten us up. Then a little bit of youth with Nick Daicos, who gives us plenty of run.

“I think it’s a really balanced group. We’ve had a lot of games under pressure, lost clearances and inside 50s and really had to stand up. I’m super proud of the guys.”

After being included in Collingwood’s leadership group in 2021, Moore was elevated to vice-captain alongside Taylor Adams and Howe in February, less than two months before he signed a mega six-year deal that could see him finish his career where it started.

Moore has played 123 games – 21 in 2022, the equal-most of his career – since being selected as a father-son pick at No.9 in the 2014 NAB AFL Draft, following in the footsteps of his famous old man, Peter Moore, who won two Brownlow Medals and two Copeland Trophies during his decorated career for the Pies and Demons.

Collingwood captain Scott Pendlebury is contracted for 2023 and playing like someone who has multiple years left, but given he turns 35 at the start of next year, the Magpies’ games record-holder might be ready to pass the baton. Moore knows the significance of the position and could be the next skipper.

“It’s something that is a massive honour to be the captain of the Collingwood Football Club. It is a big deal. I’m a lifelong supporter as well, so there have been some champions that have been captain in recent years, and Scott is no exception,” he said.

“But to be honest, when ‘Fly’ [Craig McRae] came in, he just wanted the process to be really transparent, for players and staff to make a contribution in terms of voting for the captaincy and the leadership group. Fly kept it really simple which was good.

“It was humbling to be vice-captain and get that recognition from my teammates. The four of us as a unit, we really rely on each other and we’re really different. We’re constantly trying to find ways for people to make contributions in their own ways.”

MEGA-PREVIEW Cats v Magpies, stats that matter, who wins and why

Football is only one part of Moore’s life. The former Carey Grammar school captain has completed a commerce degree at Melbourne University and is now studying a masters of international relations.

That’s where you can find him for a few hours every Wednesday night, a place of respite where he is just a student and rarely recognised as the guy who wears No.30 every weekend in winter.

“It’s really stimulating. I’m someone who needs that stimulation. Obviously football is a really physical job from the time you get up in the morning until the time you finish in the afternoon. It’s obviously physical and your focus is very much on your body, but I’m quite a cerebral persona and intellectual person, so I need to feed that part of myself. That’s what uni does for me,” he said.

“I love nothing more than being tired physically from a game or training session and then being able to dive into my studies as a bit of a release. It is a big part of my week-to-week routine, the way that I keep up with my general health and feel excited to play footy.

“I like driving to the MCG or coming to training and being excited and looking forward to it, rather than being drained having thought about it 24/7. That’s a big part of my balance and I bloody love it; I couldn’t recommend it more to other play.”

Moore might one day end up in politics or working for the UN, but that can wait. The dashing defender with the famous Collingwood blood has unfinished business in the AFL.