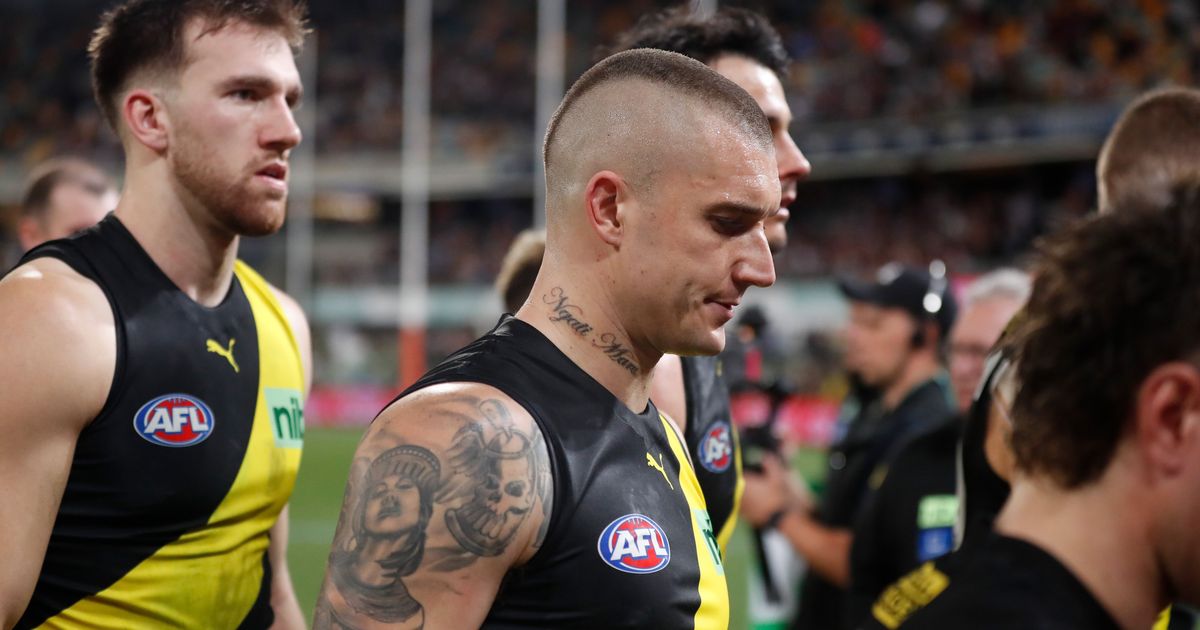 RICHMOND coach Damien Hardwick expects superstar midfielder Dustin Martin to play for the club next year and fulfil the final two years of his mega seven-year deal he inked on the eve of the 2017 finals series.

The future of the Brownlow Medallist has been a major talking point since Martin took personal leave away from the game following the loss to Carlton in round one, before returning against Collingwood in round eight.

Martin returned for the first time since round 16 – and for just the ninth time in 2022 – in Thursday night’s elimination final loss to Brisbane at the Gabba.

“He’s got two years of his contract to run. As far as I’m concerned, all the speculation comes from that side of the table,” Hardwick told reporters following the two-point loss to the Lions.

“It’s pretty simple to me: if you guys keep talking about it, it creates speculation.

“The reality is, I’m telling you: he’s got two more years of his contract, he is not going anywhere.

Hardwick said the club addressed the controversy with the 31-year-old before the game but wouldn’t comment further while the AFL was looking into the incident from 2015.

“We worry about the welfare of our players, but he manages to control that and get on with it,” he said.

“It’s something I can’t really comment on because there is an investigation going on. We’ll work our way through that over the next week.”

TALKING POINTS The moments that mattered

Richmond has been linked to Greater Western Sydney midfielders Tim Taranto and Jacob Hopper and has been successful in luring big name stars from rival clubs during this era, landing Dion Prestia, Robbie Tarrant, Toby Nankervis, Josh Caddy and Lynch.

Hardwick expects head of football Blair Hartley and the Tigers’ list management team to be busy during the upcoming trade period to ensure Richmond remains in premiership contention in 2023 and beyond.

“We like really good players, so once again we’ll work our way through that. We think we’ve got a really, really good squad of players that will forge forward,” he said.

“We’re not looking to rebuild; we’re looking to regenerate; we’ve got some young kids that you’ve only seen the tip of the iceberg that are really going to pop for us. We think we attract really good players. They can see a period of sustained success.

“It’s a disappointing season, I’m not going to lie, I feel we’re better than what the position we’re in is, but the fact of the matter is we are where we are. We’re going to learn a hell of lot from this year about what we need going forward.”