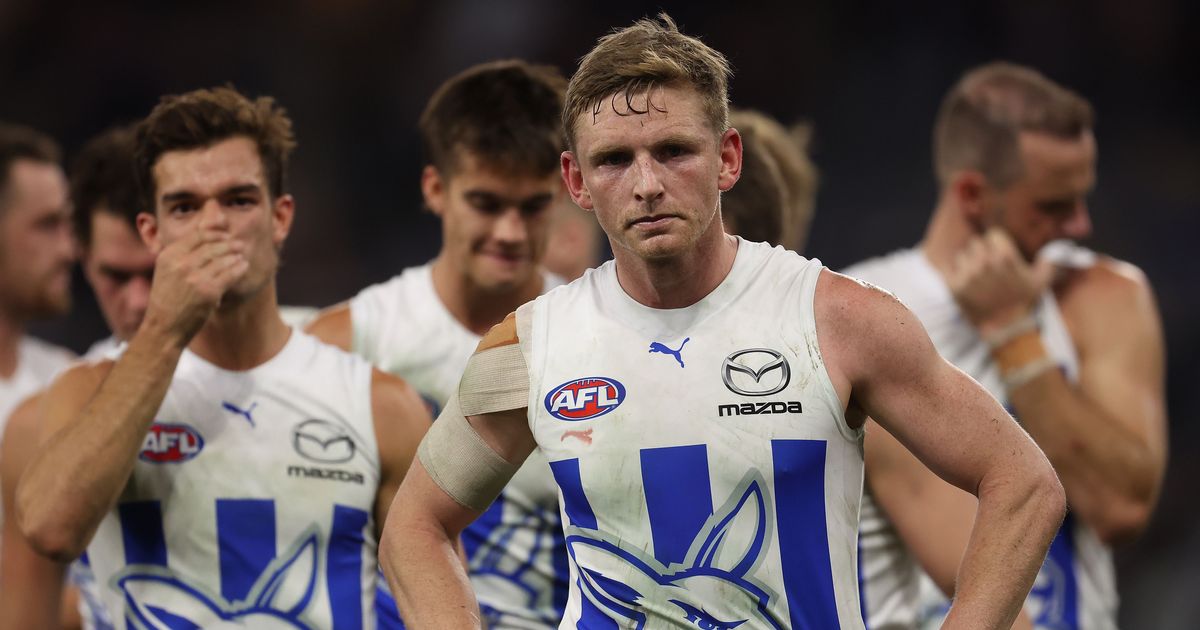 The Kangaroos have lost by a cumulative 256 points over the past four games, conceding more than 100 points in five of the past six games, leaving them second-last with a 1-7 record. North’s only victory this season came in round two against a depleted West Coast.

“We’ve got to stick together,” Noble said. “We’ve got find the positives out of it.”

The Kangaroos have only won five of 30 games since Noble took over at the end of the 2020 season, painting a bleak picture.

“At the end of the day it’s about how much we learn from this period,” he said.

“It’s not about the fails, the failure of where we’re at, it’s about what we learn.

“It’s about how we address that going forward to keep the players bubbling along.”

Noble bemoaned his side’s turnovers against the Dockers, who have won plaudits for their pressure this season.

“Stop turning the ball over,” he said. “They’re hard to penetrate but when you give the ball back you get punished severely.

“We’ve got other parts of our game but I thought that was the major part tonight.”

He added: “We’ve been doing a lot of work behind the scenes in our contested footy. We didn’t fare too well in clearances tonight. It feels like each week we’ve got one thing that pops up where we get severely taken advantage of.”

Noble said the knee injury that forced Ben McKay to be subbed out appeared to be a medial issue, while he pointed to Will Phillips and Tom Powell as options to apply pressure for selection via the VFL.

Fremantle rose to top spot, albeit likely temporarily, with the massive win although coach Justin Longmuir was reluctant to find joy in that.

“Not really, because it’s a moment in time,” he said. “What I do take joy in is how we’re playing.

“The connection within the group, how our players are looking after each other on the field, the way they’re getting around each other during the week, how they’re holding each other to account and to higher behaviours and standards.

“Those are the things you take more notice of, because the ladder is a byproduct of doing all those things well.”

The Dockers had lost six players to health and safety protocols for the game and ramped up restrictions around their training, significantly impacting the club. Longmuir was proud of his players’ response, particularly their five-goal-to-none first quarter.

“I was really proud of the way we jumped into the game,” he said. “Really good win last week against Geelong), six-day break, a lot of distraction around COVID. I thought we got on the front foot, we were proactive early.

“We got the game on our terms. I was proud of our players because it showed we prepared really well and our heads were in the game.

“We picked it up early in the week that there could be some distractions and potential to lose the focus of our players to things that don’t help them play well.”

Longmuir praised debutant Jye Amiss who kicked a goal with his first kick in AFL footy, finishing the game with two majors along with nine disposals, five marks and six score involvements.

“He gave us everything we wanted,” he said. “Engaged his opponent. As he gets bigger and stronger and fitter, he’ll provide more options and he left a couple of marks out there that he’ll take in four weeks’ time to be honest.”

Longmuir confirmed Sam Switkowski had entered concussion protocols while he said Alex Pearce and Luke Ryan were both fine after ankle scares.