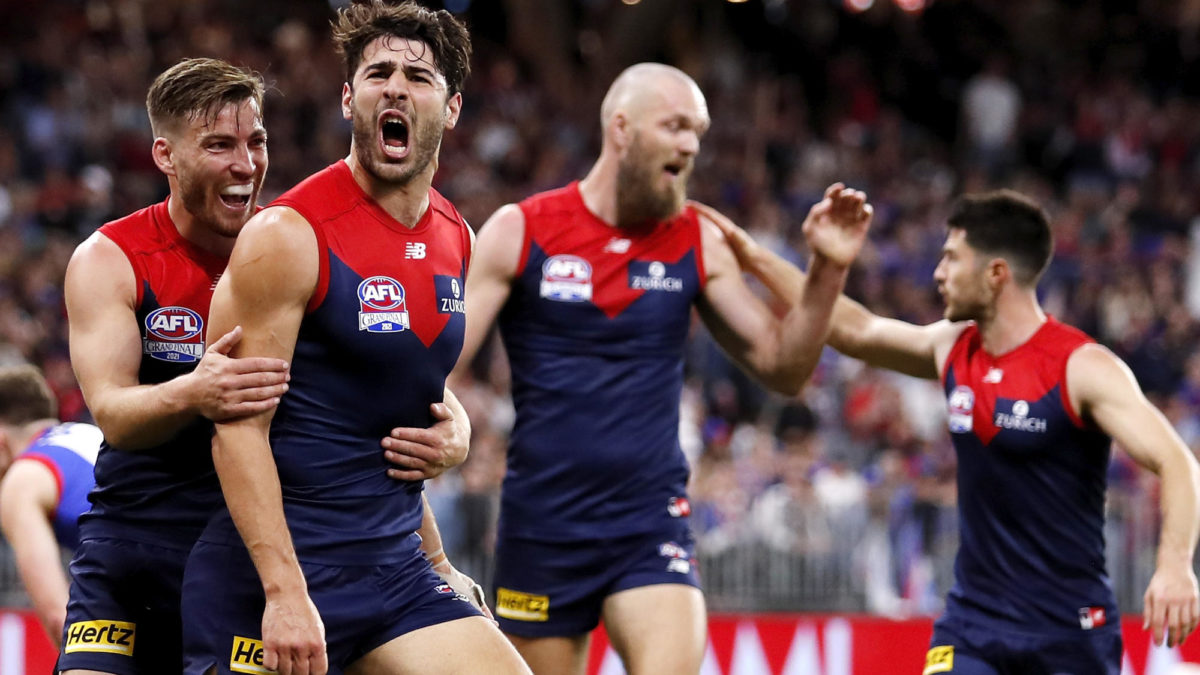 With nine games of the home-and-away season to go, the 2022 finals series is far from set in stone just yet.

Six teams remain in contention for precious top-four finishes, ensuring the double chance; while at the other end of the eight, Carlton and the Western Bulldogs will jostle for the final spot in September all the way to Sunday.

From dream scenarios, biggest nightmares and everything in between, here is how the ladder is taking shape throughout Round 23:

Already confirmed as minor premiers, the last thing Geelong needed out of its clash with West Coast was more injuries.

But that’s exactly what they got, with Jake Kolodjashnij (concussion) and Cameron Guthrie (shoulder) failing to run out the game, and joining Jeremy Cameron and Rhys Stanley on the sidelines.

The Cats still head into September as premiership favourite – but between their own injuries and Melbourne’s scintillating Friday night performance, things might be getting a little nervous down at the Cattery.

Best-case scenario: 2nd if Sydney lose or fail to win by approximately 54 points

With top four on the line against Brisbane at the Gabba, the Demons were at their scintillating best, locking away the double chance with an incredible 58-point win.

The shock thumping has left Sydney with work to do; with the Dees’ percentage rocketing from 127.7 to 130.5, now 2.2 ahead of the Swans, they will now need to beat St Kilda by roughly nine goals to have a home final at the MCG.

Should the Swans lose, the Dees could find themselves facing Collingwood, Fremantle, or even the Swans after all at the MCG; but even if they’re forced to head to Sydney, the reigning premiers look BACK.

Prediction: 2nd (3rd at start of round)

If they win: 2nd, provided they beat St Kilda by approximately 54 points

The silver lining for the Swans out of Melbourne’s thumping win over Brisbane is that, with a percentage gap of 9 over the Lions, falling to sixth is now extremely unlikely.

The bad news is that they’ll now need to thump St Kilda on Sunday to retake a home qualifying final against the Demons; knowing how much they’ll need to win by isn’t so much of an advantage anymore.

At the very least, a Swans win will seal up third; but a loss will see them leapfrogged by Fremantle, who defeated GWS, and Collingwood, who are even-money odds to defeat Carlton.

The Swans still have the top four in their own hands; but their path to a premiership just got a little tougher.

Prediction: 3rd (2nd at start of round)

The Dockers made mighty tough work of it, trailing GWS by 31 points early in the second term, but they eventually did enough for a 20-point victory that keeps their top-four chances alive.

Had they scored one extra point against Richmond in that draw, they’d now be locked into a double chance – but as it stands, they’ll be nervously watching Collingwood’s clash with Carlton and Sydney’s with St Kilda on Sunday.

If either the Magpies or Swans lose, the Dockers will face Geelong in a blockbuster qualifying final at the MCG. And we all know their record against the Cats in qualifying finals.

Defeated by Melbourne by 58 points

Regardless of where they wind up when Round 23 concludes, the Lions’ embarrassing loss to Melbourne on Friday night has taken an axe to their premiership credentials.

From dreaming of a home qualifying final heading into that match, the very best the Lions can hope for now is to sneak into fifth, and face one of Carlton or the Western Bulldogs with the double chance.

Should Collingwood defeat Carlton, however, it will mean Richmond at the Gabba in an elimination final.

If they win: 3rd if Sydney lose, 4th if Sydney win

If they lose: 6th

The Pies’ percentage is basically one fewer win at this point, which makes my job a lot easier. So thanks, narrow wins!

The Magpies head to the MCG on Sunday already knowing half the stakes at play: they are guaranteed top four ahead of Brisbane and Fremantle.

They will also know if Richmond have, as expected, got the job done against Essendon to lock in seventh, or whether losing to Carlton will see the Pies face the Blues again in week one of the final. Either would make the city of Melbourne just about unbearable for the next week and a half.

The Pies have more to gain with a win than any other side in the eight, and just as much to lose. Beat the Blues, and a shock top-four finish, a precious double chance, and a likely shot at Geelong at the ‘G, is their reward. Lose, and she gets ugly.

Over to you, Craig McRae.

After their draw with Freo and incredible losses to Gold Coast and North Melbourne, the Tigers needed to win three of their last four to be locked into September. Tick, tick, and tick, and one more win over Essendon in the final round for good measure..

Now, it’s all about seeing whether they play Brisbane or Collingwood in an elimination final – a Magpies win over Carlton would see them head to the Gabba, while a Carlton triumph would set up a mouthwatering rematch of the 2018 preliminary final at the MCG.

But whoever they play, the truth is this: nobody in their right mind is going to want to play Richmond this September.

If they lose: 8th if the Western Bulldogs lose OR win but fail to make up percentage differential, 9th if not

The Blues had one foot in September when Charlie Curnow gave them an eight-point lead in the dying minutes against Melbourne.

Instead, long-suffering fans will have to wait until at least 3:30pm on Sunday to know whether their nine-year finals drought is at an end.

For starters, the Blues will be donning brown and gold early on Sunday, hoping Hawthorn can take down the Bulldogs and get them in without needing to lift a finger. (Woo-hoo! Default!)

If the Bulldogs win by more than about three goals, removing their current 0.9 percentage disadvantage, then it becomes simple for the Blues: beat the Pies and they’re in, lose and they’re gone.

But if the Dogs win in a tight game, then the Blues can still go down to the Magpies and squeak into the finals – but by gee, the lines will be painstakingly tight.

Ultimately, the Blues showed tremendous ticker and spirit to come so close to Melbourne in Round 22, and with one last chance to get the four points they needed, I’m backing them to get it done.

If they win: 8th if Carlton loses AND they overcome the percentage differential, 9th if not

The Bulldogs were ghastly in scraping over the line against GWS in Round 22, and while it has still left them with a serious chance of finals action, they failed to remove percentage from the equation.

It won’t matter if either the Dogs lose to Hawthorn on Sunday in Launceston – sayonara finals if that happens – or if they win by more than about three goals – over to you then, Carlton. Anything in between there, and Dogs fans will be scrambling for the calculator as the Blues take on Collingwood.

The Dogs still need plenty to go right, and while both individual results remain odds-on to happen, having everything go their way might still prove too far. Their one-point loss to Adelaide in Round 6 now feels oh so crucial.

The Saints’ percentage gap to Carlton sits at 8.7, meaning to make finals, they’d need to see Collingwood beat the Blues by 70-odd points, then do the same to the Swans, AND see the Bulldogs either lose or win narrowly.

Dejected Carlton players walk from the ground after losing to Melbourne. (Photo by Darrian Traynor/Getty Images)

The Roar’s predicted Finals Week One