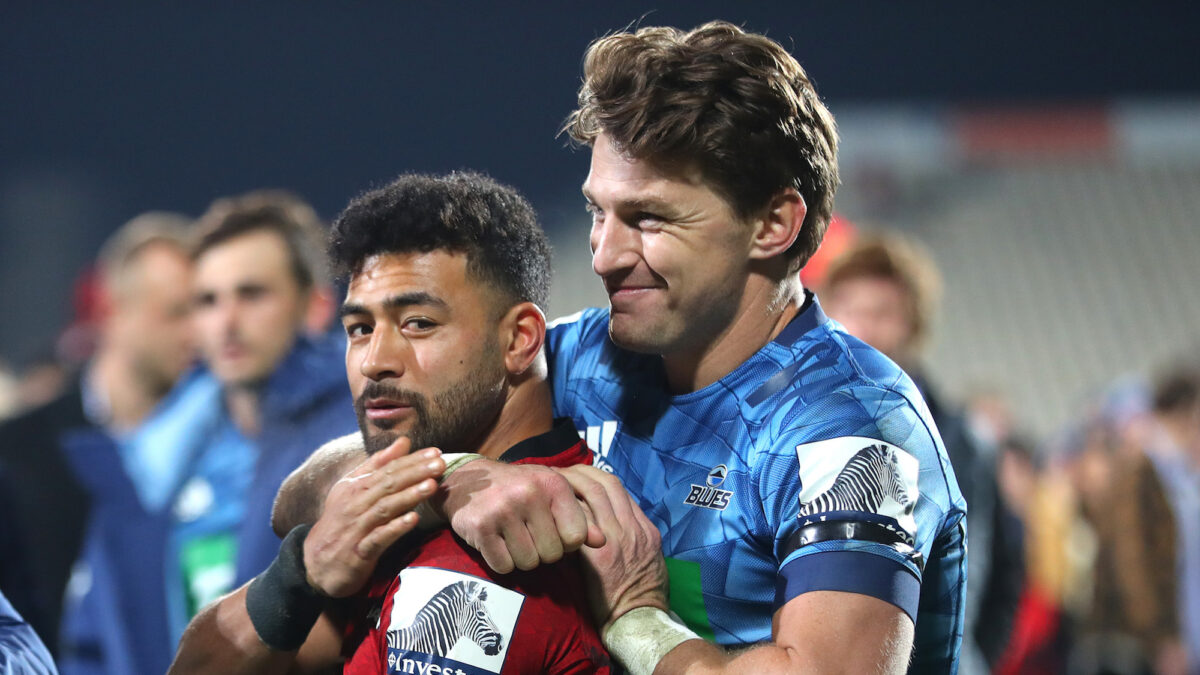 There is always something epic overhanging a semi-final.

For the winners, it’s muted elation, knowing that they’re off to the big show albeit with a nagging understanding that they haven’t yet won anything.

And for the loser, it’s heartbreak and devastation at having come so close, only to be left with nothing but hollow platitudes and vague promises of better things to come next year.

When semi-finals hang in the balance, or come down to one of two moments like we saw on the weekend, those feelings are magnified even further.

Victors question their legitimacy, and losers feel even more frustration, not at what might have been, but what should have been.

There are plenty who will say that referee Ben O’Keeffe robbed the Brumbies of their rightful place in the final, and that’s understandable.

There was a compelling case for a late breakdown penalty met with a ‘nothing to see here’ from a referee who, in his quest not to be the man who decided the match, in their eyes, became just that.

Take out the emotion, however, and remember that rugby is played over 80 minutes, not a single moment. The Brumbies had many other moments – many of them under their control – that could just as easily have been the decisive one.

With 20 minutes remaining, Noah Lolesio’s conversion miss of Lachlan Lonergan’s first try felt important at the time. And so it proved.

Remember that even if O’Keeffe had rewarded Luke Reimer, it would only have offered Lolesio an opportunity to win the match, not won him the match – two very different things.

There was another moment in the 16th minute, with the Brumbies already up by 7-0 thanks to a sparkling try to inside centre Irae Simone.

Within sniffing distance of doubling the lead, lock Cadeyrn Neville took it upon himself to take the ball over the goal line into a pile of bodies, without any realistic hope of being able to force it, thus allowing the Blues to clear their line from a drop out.

It was a stunning example of the recent new law at work, where attacking players have to make better decisions about when and when not to force the issue, lest they release all of the pressure they’ve worked so hard to create in the first place.

Neville’s partner in crime was Tom Hooper, badly winged in the lead-up, trying to buy time in the backfield for his shoulder to come right, but able to do nothing more than spill the drop out, and cruelly, pave the way for the Blues’ best period of the match.

It was no surprise that the Blues would find their feet in the second quarter, but after much anticipation beforehand about how the Brumbies would cause havoc at the breakdown, it was in fact the Blues who showed more willingness for the scrap, blowing through and over on the counter ruck, and pushing a frustrated Nic White into a running battle with the officials.

By this time the Blues’ scrum was dominant, and the ability of their runners – forwards and backs – to push or step through contact was hurting the Brumbies.

The value of Rieko Ioane at centre was illustrated by his pace on the outside turning a three versus three into a sweeping breakout for Mark Telea to finally finish off on the opposite side of the field.

At 20-7, and with Beauden Barrett expertly mixing his running, kicking and passing game, Blues fans could have been excused for logging on to pre-book their tickets for the final.

That didn’t reckon on the Brumbies taking stock in the sheds, simplifying their game plan, and seizing the initiative back via retaining more possession and playing off their maul.

That shift delivered them two unanswered tries and so very nearly the match; 12 points only, when they needed 14.

And even though the Brumbies’ tries came soon afterwards, the heroics of Stephen Perofeta getting under Tom Wright and Tom Robinson to superbly steal a Brumbies line-out throw helped eat up valuable minutes and kept the Blues from capitulating.

The final stanza felt reminiscent of the end stage of the 2011 World Cup final at the same ground. All the momentum was with the visitors, the home side barely hanging on, having lost any pretence of playing normal rugby, just willing the clock to tick over 80 minutes and for the referee to call time.

That’s a dangerous state for any team to be in. Indeed, the Blues froze, becoming too passive and giving up possession on the wrong side of halfway.

Tension can grab hold of even the best of them and it was the otherwise superb Barrett who ignored the opportunity to pin the Brumbies deep in their own 22, instead running meekly into contact.

With O’Keeffe waving play on, the Brumbies pressed forward. A better option felt like forcing an offside penalty against a panicked defence, but Lolesio chose to pull the trigger early with a drop-goal attempt.

The match contained great players across the park from both teams. They are too numerous to mention, other than to say on a night tailor-made for the low numbers, all four wingers made outstanding contributions.

The terrific second half by Brumbies typified everything good about the Dan McKellar era. It is true that he departs without a title to his name, and while that will sting, he can feel justifiably proud of his players, and of leaving the franchise in a healthy state.

The Blues, meanwhile, get another week to take stock of what they did so well – their effectiveness when they are able to sweep forward into attack with players supporting the ball carrier is at times breathtaking – and also their good fortune.

Recovering skipper Dalton Papalii fronted court during the week, alleged to have been speeding on an Auckland motorway. Equipment irregularities saw him walk free.

Perhaps Ben O’Keeffe has a brother who instals speed cameras, or a father who is a judge? Or perhaps Papalii just got lucky, because that’s how life and rugby works. Either way, it was the Blues’ second great escape of the week.

Friday night’s first semi-final in Christchurch was another case of what if, and if rugby matches were decided on statistics alone, there was another strong argument to be made for the wrong side winning.

The Chiefs dominated possession by a factor of two to one, and – incredibly – spent ten minutes and 26 seconds in the opposition 22, compared to 56 seconds for the Crusaders. They also enjoyed 20 minutes with a one-man advantage.

So why wasn’t the 20-7 final scoreline turned around the other way?

Some of it started with referee Nic Berry, working rigidly through the warning process for repeated infringements in the defensive 22, when it felt like he could have cut through the predictable pomp and theatre of it all, and punished the Crusaders harder and earlier.

Of course it was more than that. The Chiefs were very much authors of their own misfortune when, in the 11th minute, Pita Gus Sowakula declined an invitation to score untouched, inexplicably running into contact and spilling the ball over the line.

Then, with Pablo Matera sat down for his first ten-minute set, the Chiefs opted for another five-metre scrum only for things to come unstuck in the back line. In an instant, Sevu Reece and Will Jordan had engineered a five-metre scrum at the other end.

Cullen Grace was off the back before Samipeni Finau had a chance to figure out what was going on, and the home side had a handy 13-0 lead.

The Chiefs finally got some reward, regathering the kick off, for Angus Ta’avao to slip through George Bower. In the context of a match where the Crusaders made a purported Super Rugby record 2837 tackles, it was a soft score.

Their hopes would have been raised even further when, in the 31st minute, Matera received a red card for high contact on Bryn Gatland. Objectively, Matera was stationary and passive, Gatland initiated the collision and actually pushed Matera backwards.

Taken in isolation, it was a very unlucky send-off, as was Quinn Tupaea’s earlier yellow card.

But with the all-round sympathy factor for Matera low, a hangover from his recent tip tackle on Jordan Petaia, it was probably nothing more than the karma bus doing the rounds.

A couple of weak Chiefs clearances kept the Crusaders at the right end, which only invited Richie Mo’unga to rip them apart then brilliantly hit Grace off his left hand for his second try. At 20-7 the Crusaders had a handy but not insurmountable half-time lead.

With all the momentum, the third quarter promised so much for the Chiefs, but ended up delivering so little. Their ball runners weren’t proving dynamic enough on the carry.

Bryn Hall picked off Sowakula at a five-metre scrum. Tupaea threw the ball over the top of Alex Nankivell’s head, blowing a certain try. And so on.

At 56 minutes the Chiefs turned down an easy shot at goal in centre field, but instead of drilling it into the corner, Gatland only made ten metres to touch. Rudderless and pointless.

By now the Crusaders’ counter-ruck was a massive factor. The increasingly vocal crowd joined Sevu Reece in celebrating every turnover.

At 70 minutes the gig was up. Despite all of the indicators falling their way, the Chiefs had run their race, and they and the Crusaders knew it.

In truth, the Chiefs, rather like the Brumbies, have felt like a semi-final team all season long.

A tactical re-jig, taking points when they were on offer, perhaps playing with the wind in the first half when they had the chance, may well have delivered a different result.

But with plenty of youthful talent in their ranks, their prognosis for 2023 is good.

As in Auckland, conditions were much more difficult for the players than it appeared on TV. Two high pressure semi-finals in windy, wet and slippery conditions could easily have developed into error-ridden slogs.

That both matches were so captivating, and full of high skill, was a credit to all four teams.

With apologies to the Brumbies and the Chiefs, the question of whether we got the right final or not is moot. Despite their respective merits, despite the reasons why either could have won, the right outcome has been achieved.

The two best players on display on the weekend were Beauden Barrett and Richie Mo’unga. Fierce debate rages as to which one will start at ten for the All Blacks versus Ireland.

For neutrals who don’t care for either the Blues or Crusaders, the final remains a mouth-watering proposition.

Barrett versus Mo’unga. Mo’unga versus Barrett. For that reason alone, the two right teams are in Super Rugby’s grand final.