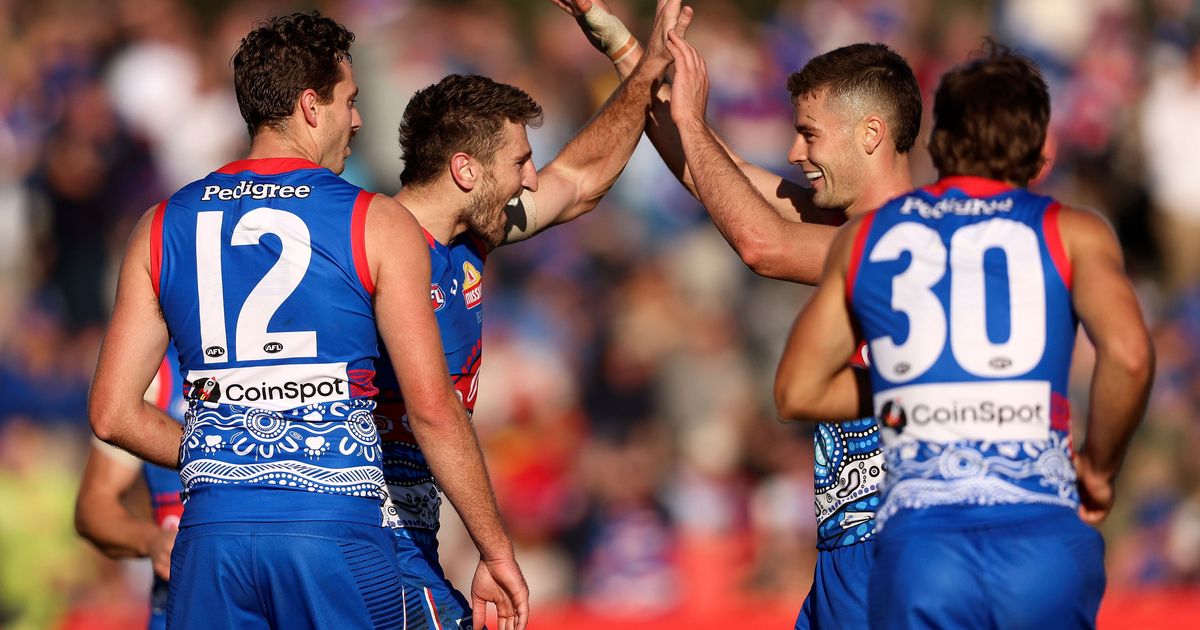 THE BITE is not quite back, but the Western Bulldogs showed glimpses of their 2021 form in staving off a plucky Gold Coast by 19 points in Ballarat on Saturday.

Some errant goalkicking aside, the Dogs could have won by more, and had to rely on some Marcus Bontempelli class in the final quarter to bank the four premiership points.

Playing against a Gold Coast defence minus Rory Thompson (knee) and Jy Farrar (concussion), who were both gone before half-time, Bontempelli went forward in the final term to take two big marks and kick two clutch goals.

The Bont finished with 24 disposals, eight marks and three goals for the day to lead a Bulldogs midfield that had the better of Gold Coast.

Jack Macrae (34 disposals), Bailey Smith (34 and a goal) and 200-gamer Adam Treloar (26 and a goal) all feasted as the Bulldogs won the clearances by 14 and contested possessions by 19.

Following wins over Sydney and Fremantle in the past fortnight, the Suns will lose no fans for their effort.

They trailed by 32 points midway through the third quarter and got it back to 14 at the final change, and even had a chance to pinch an unlikely victory when Malcolm Rosas reduced the margin to seven points with just under two minutes to play.

The Bulldogs played some of their best football of the season in the first quarter-and-a-half to set up a 19-point lead, riding the wave of the white-hot Aaron Naughton.

They nullified the strong Suns midfield at the stoppages and created plenty of run from the half-back with Bailey Dale and Caleb Daniel.

Naughton was unstoppable early on, taking four contested marks in the first quarter – all on Sam Collins – to kick 2.1, and then adding a third goal just seconds into the second term.

Collins fought back as the day wore on.

However, the Bulldogs’ inaccurate kicking kept Gold Coast in the contest.

After trailing by 19, the Suns came to life, with Ainsworth kicking two goals and Jeffrey’s third, a spectacular over-the-head effort, brought the visitors back within seven points at the main change.

Jeffrey’s miraculous goal
Playing just his sixth career game, Jeffrey produced a magical performance that included a second quarter highlight that will live with him the rest of his career. After kicking two first-quarter goals Jeffrey uncorked a spectacular over-the-head effort midway through the second to lift the flagging Suns. Initially unlucky to not win a free kick in the goalsquare, the 20-year-old bounced to his feet to intercept a Bulldogs handpass, immediately throwing it on his boot and watching it sail over his head for an amazing goal.

Treloar celebrates game No.200 in style
After missing a couple of tough shots at goal in the opening half, milestone man Treloar had his moment in the third quarter. After taking a mark from a lovely Macrae pass, Treloar went back and banged home the set shot from outside 50m. The 29-year-old celebrated with a roar and double fist clench as the accurate kick came in the midst of a Bulldogs flurry.

Poor Rory Thompson
One of the feel-good stories of the season turned sour during the second term when Suns veteran Thompson limped off. After missing almost four full seasons with back-to-back ruptured ACLs (on different knees), the 31-year-old made his way back into the senior team the past two weeks to help in wins over Sydney and Fremantle. However, after being switched on to the rampant Naughton early in the second, Thompson got up from a contest gingerly before hobbling off and heading straight to the dressing room. He finished the match with his left knee in a brace.