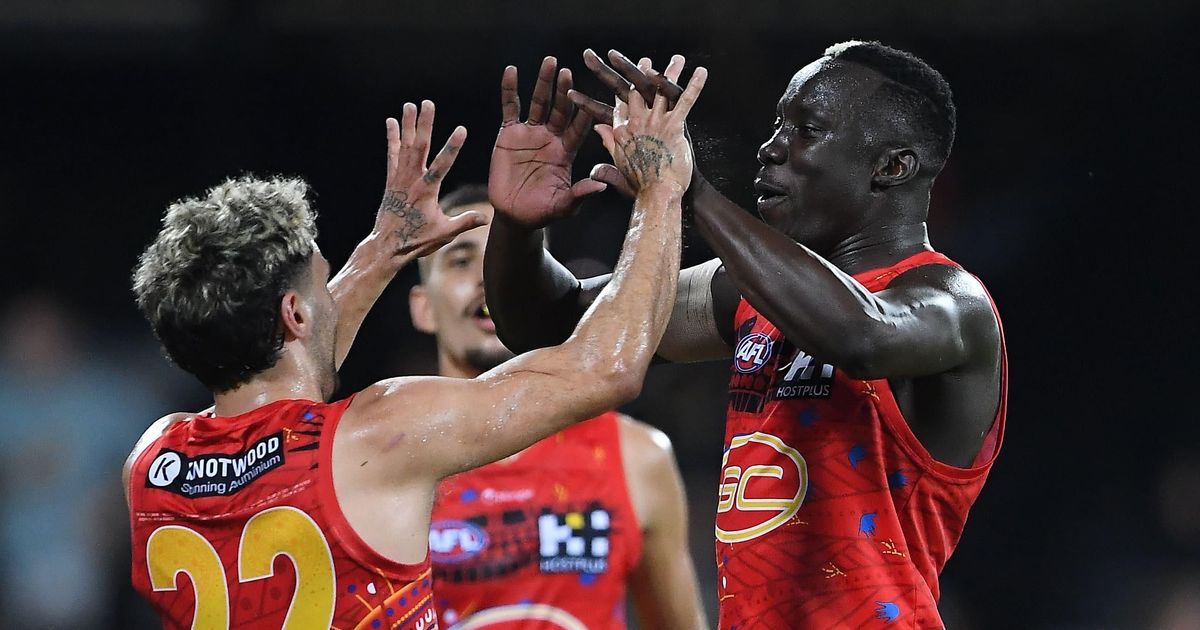 WHEN Ben King suffered a season-ending knee injury in February, many thought it spelt the end of Gold Coast’s chances of surging up the ladder in 2022.

King was coming off a 47-goal third season in the AFL and was the centrepiece of the Suns’ forward structure.

How were they going to score without their main marking target available?

It’s a question Brad Miller, who had been lured from Sydney University after six years as an assistant to Leon Cameron at Greater Western Sydney, admitted he took a little while to get his head around.

“When it happened, it did suck the life out of our group for a good couple of days,” Miller told AFL.com.au when asked about King’s injury.

“But we were still in the process of finding our best mix … were we going to play three talls? Who were they going to be? Which of the smalls were going to take steps up?

“It was at that point where we were still shaping, it wasn’t like we’d played five games and had consolidated the mix.

“Obviously losing such a talented, important player to us, it was definitely impactful for a good couple of days.”

What Miller and the rest of the Suns’ coaching and playing staff have done for the first 16 rounds has been incredible.

With a forward line as diverse and eclectic by playing style and personality as any in the competition, the Suns have fashioned a plethora of scoring options.

“Instantly I was struck by how hungry they were,” Miller recalled of his first forward line meeting.

“They were open to being coached, open to new ideas, not stuck in old ways of doing things. They were just really hungry to get better.

“When you’ve got such a diverse mix of players, it’s rewarding.

“You’ve got to get to know them as people. They all offer something different as people and as players.

“It’s exciting and it keeps the job really interesting because you’ve always got another layer to peel back and get to know them a bit more, about their history, which makes them who they are and the players they are.”

Gold Coast settled on Chol and Casboult as its spearheads – Chol the laconic former Tiger who is arguably better at ground level than overhead for his 200cm frame, and Casboult the wrecking ball former Blue that scatters packs with his broad chest and physical approach.

They have kicked 34 and 27 goals respectively – more than the club could have asked for in an entire season, much less with at least six games to go.

The flair comes from Rankine, Rosas jnr and Jeffrey, the lung-busting up-and-back efforts to link the midfield and forwards from Ainsworth and the never-say-die, harass-at-all-costs pressure from Holman.

It’s easy to overlook Holman, but don’t – he’s ranked fourth in the competition for tackles inside forward 50.

Miller said he realised quickly the talent he had at his disposal – “stuff you can’t coach” – and went about fostering it.

“I’m talking about Rankine and Chol and Jeffrey and Rosas. those guys are doing things on the footy field you can’t coach. You’ve got to allow them to play on instinct a bit,” he said.

“I recognised that after a couple of conversations with Stuey (Dew), and then I just had to not overcoach them.

“Try and coach them to put them in spots to put that talent on show and not get in their way, not give them too much instruction, not cloud their head too much.

“Just give them parameters that will fit within our team structure, but then allow that talent to come to the fore.

“Those guys, particularly Rankine and Joel Jeffrey and ‘Mally’ Rosas, those guys have taken that and run with it.”

Miller said Rankine’s skill still surprised him. You just have to look back to round 15 against Port Adelaide where the South Australian tapped the ball ahead like a basketball, for it to perfectly sit up and feed a handball to Ainsworth for a Brandon Ellis goal.

Or a week later against Collingwood where he flung his right boot at a bouncing ball for it to sail perfectly between the posts.

“Sometimes you see ‘Ranks’ in a contest and he ends up with it somehow, like he’s got magnets in his hands because it ends up bouncing up perfectly and he’s able to step around someone,” Miller said.

“He’s just got an uncanny knack and skill around the contest when he goes there with a mindset to impact.

“I can’t coach that.

“We could do that 100 times on the track. I can’t do it, I can’t teach him how to do it, it’s just giving him the freedom to explore that.”

Others have played roles too, with Jack Lukosius, Sam Day and Chris Burgess all spending time as the third tall option.

Miller said it was a constant evolution.

“I think it’s the tweaks to the game … us playing the game in our forward half more this year has meant we’ve generated more inside 50s, which means the guys are getting more looks.

“When we’re getting a lot of inside 50s consistently, it’s then trying to be more efficient – that’s the synergy piece that’s been growing.

“There’s still layers and levels to go, but it’s starting to click.

“We’ve still got areas to improve on.”