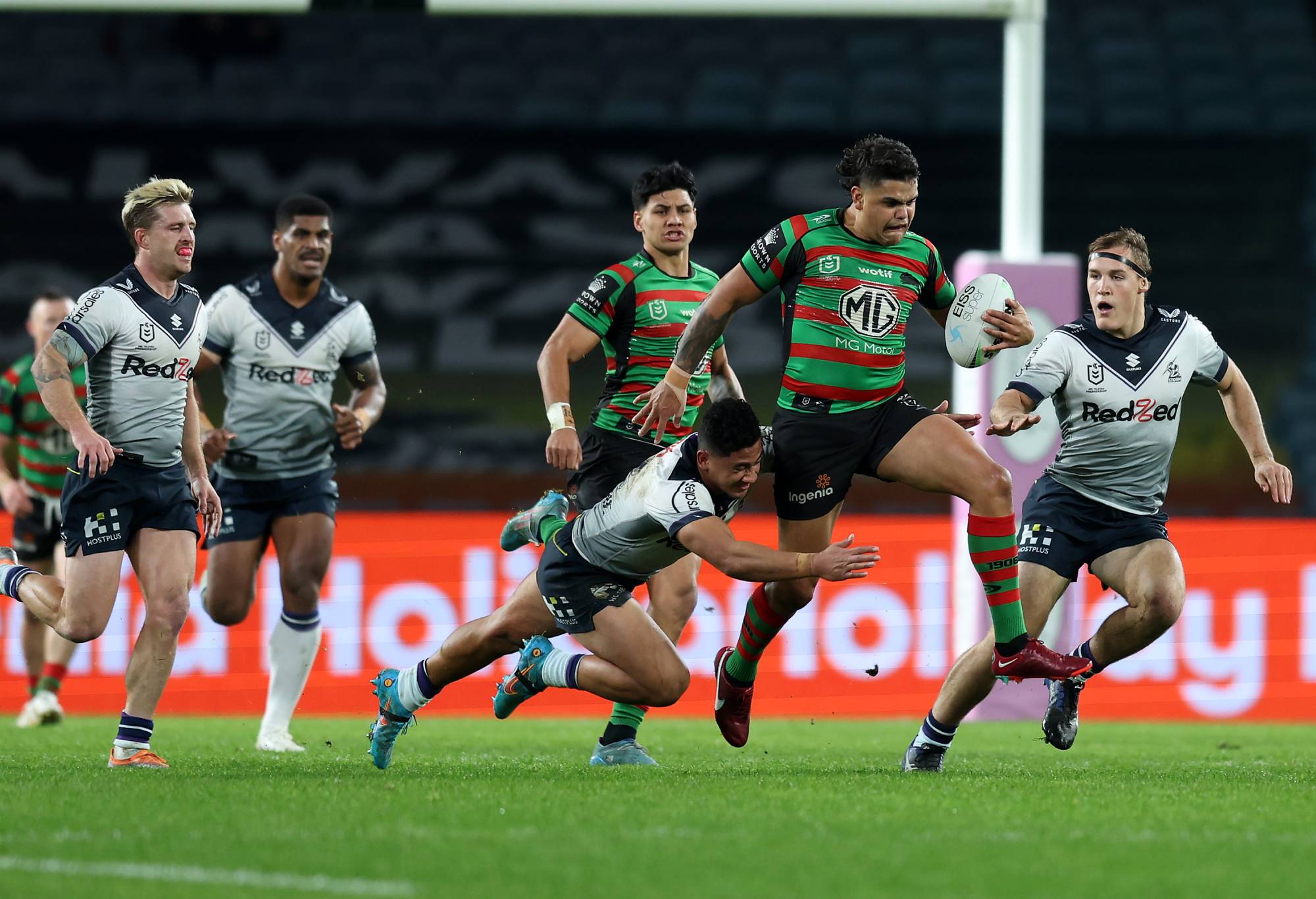 We’re down to the final six rounds of the regular season which will determine more than just who misses the playoffs.

Careers are on the line for players, coaches and administrators as the 16 NRL teams jockey for position over the closing weeks of the schedule.

A few match officials should be potentially be cleaning out their desks after Sunday night’s horrendous call which got the Cowboys home by a point against the poor old Tigers.

Premiers Penrith are certain to finish first after maintaining their eight-point lead after Round 19 by downing third-placed Cronulla but the race to fill the other seven playoff berths is a long way from being sorted.

Technically, 14 teams are still in contention to make the final eight with the Bulldogs, Knights and Warriors only remote mathematical chances.

The Roosters have taken eighth spot from Manly and the Dragons have shown signs of life after upsetting the Sea Eagles. Canberra joined those three teams on 20 competition points with an unconvincing win over the Warriors.

Parramatta and Melbourne are going backwards and are no guarantee of making the finals while South Sydney seem to be hitting form at the right end of season.

North Queensland, Cronulla and now Brisbane, after vanquishing the Eels, are in the top four and will be hard to shift in the race to secure an all-important second chance in the finals.

For-and-against records are likely to come into play in deciding final rankings with a deficit of 98 adding weight against the Dragons’ chances.

Parramatta are homebodies over the final six rounds with four matches at CommBank Stadium, as well as a short trip to Manly and one flight to Brisbane.

In working out the strength of schedule for the closing rounds, we have calculated a tally for each team by adding up their remaining opposition’s current competition points on the ladder.

South Sydney have the highest cumulative total from their final six opponents with 146, therefore they have the hardest strength of schedule. Cronulla’s is lowest at 96.

The best/worst case scenario for each team is based on the best possible mathematical outcome – basically if they won all their remaining games and the other results go that team’s way to the optimal degree. It is calculated by a standard winning margin in each match of 12 points (there could be much bigger swings in the for and against but then we’re getting into true trainspotter territory, not the cool Begbie kind).

The run home for each team

Likely finish: 1st. It would take a horrific injury toll for the Panthers and no more losses from the Cowboys for the premiers to lose top spot in the closing rounds.

Best-worst mathematical case scenario: 1-11. The Cowboys are all but certain to finish top four but in a nightmare scenario they could drop as low as 11th.

Likely finish: The narrow win over the Tigers means they should finish in the top four. Keeping the Sharks and Broncos at bay will be their big challenge.

Likely finish: Top-four destiny is in their own hands despite the loss to Penrith on Saturday night but despite having the softest schedule, they now need the Cowboys to slip up to sneak into the top two.

Likely finish: A dream draw to finish the season means a top-four spot is a strong possibility after collecting the wooden spoon two years ago and placing 14th last year. The emphatic Round 19 win over Parra and Melbourne’s loss to Souths lifted them into fourth spot.

Likely finish: They have lost six of their past nine so they’re no longer sure things to make the top eight let alone the top four, particularly with Ryan Papenhuyzen out for the year. Even missing the top two would be their lowest regular-season placing since 2015 – that’s how successful the Storm machine has been in recent years.

Likely finish: Saturday’s win over the Storm has propelled them ahead of Parramatta but despite finding form recently, they still have a tough draw to overcome to ensure their playoff spot.

Likely finish: A home-heavy schedule won’t count for anything if Parra play like they did against Brisbane in Round 19. Should qualify for finals but now face the prospect of doing it the hard way from the bottom half of the bracket.

Likely finish: The big win over the Knights after doing likewise to the Dragons the previous week has enhanced the Roosters’ chances of sneaking into the eight. It still could come down to the final round against the Rabbitohs at the new Allianz Stadium opening match to decide their playoff destiny.

Likely finish: That loss to the Dragons at Kogarah could prove to be the difference between the finals or the final round being the end of their season.

Likely finish: The odds are against the Green Machine returning to the finals despite upsetting the Storm and outlasting the Warriors over the past fortnight. They don’t have a lot of higher-ranked teams on their schedule but you can’t rely on them to string enough wins together to make the eight.

Likely finish: With a relatively soft draw to finish the season, the Dragons could challenge for a playoff spot after upsetting Manly but don’t bet on this inconsistent team rising any higher. Their woeful for-and-against is also a huge factor to overcome.

Likely finish: Deservedly rose another couple of rungs based after Sunday’s triumph over the Titans and their recent form under interim coach Mick Potter has been a breath of fresh air.

Likely finish: Let’s Gone Warriors? This season is already gone and poor old Stacey Jones has not only inherited a basket case, he’s been passed over for the opportunity to turn them around next year despite being a club legend who’s done the hard yards as an assistant coach. At least their home games are now in Auckland but the not so dizzying heights of 13th or 14th are their likely finishing spot.

Likely finish: The remaining schedule is not too tough but neither are the Knights these days. They have not beaten any of the top-eight sides all year and are unlikely to rise any higher than their current predicament.

Likely finish: Avoiding the spoon and the sack will be the two main missions for Justin Holbrook. A slight rise from 15th is probably their best-case scenario, which may not be enough to prevent the latter.

Likely finish: At least caretaker coach Brett Kimmorley has a few home games on the schedule but the wooden spoon is all but certain to be housed at Concord after Round 25.