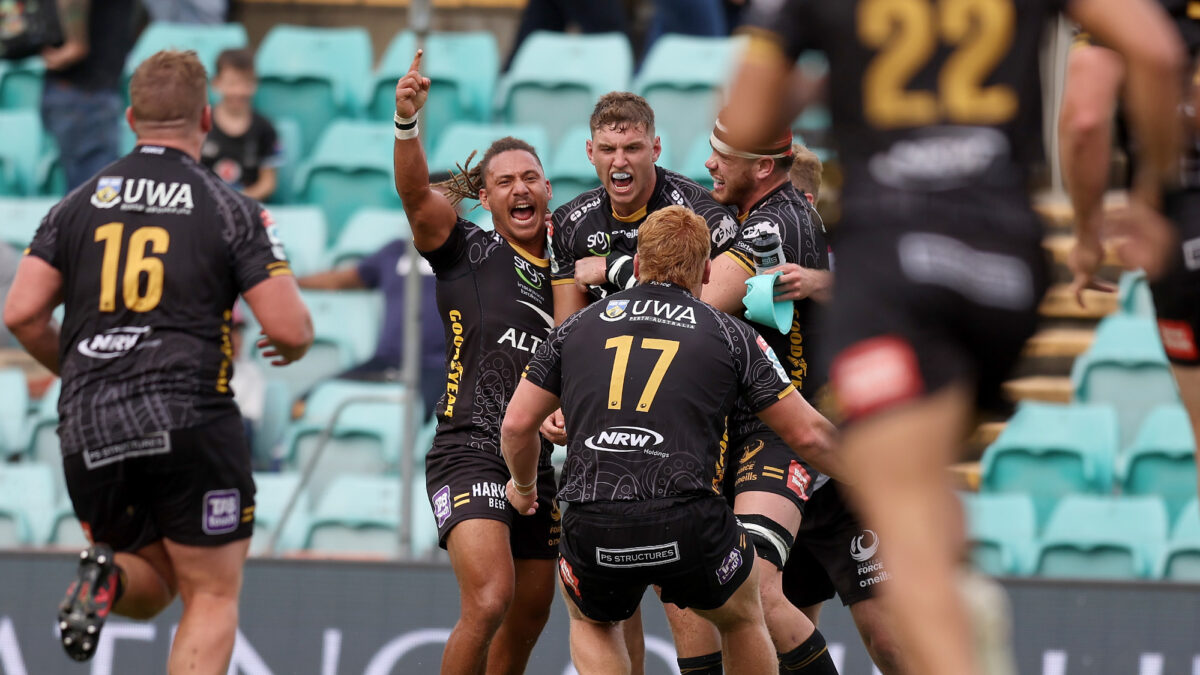 The Super Rugby Pacific Medical Advisory Group made the decision to postpone the match, scheduled for 8.30pm AEST due to a large number of the Force squad being unavailable for selection.

The Force were without coach Tim Sampson, Izack Rodda and Issak Fines Leleiwasa for last week’s defeat to the Waratahs and there are suggestions that the situation has become significantly worse with around 20 players and staff affected.

“The Super Rugby Pacific tournament is very disappointed to have to postpone another game this season and for it to be impossible to play all six contemplated matches as part of this weekend’s Super Round, but the decision was made with the best interests for the health and wellbeing of players and staff in mind,” Super Rugby said in a statement.

“Every effort was made to try to ensure this game could go ahead as part of Super Round Melbourne, but with a large contingent of the Western Force squad unavailable, it simply wasn’t feasible.”

SANZAAR confirmed the rest of the schedule for the three-day event will be unchanged, which will see the five remaining games and the Super W Final.

Force CEO Tony Lewis said that it is crucial to protect the player’s health and well-being as well as the integrity of the club and the competition.

“The Western Force has medically reported considerable numbers of COVID-19 cases within the squad, which under Rugby Australia protocols means they are not available for selection,” Lewis said.

“We have worked closely with Rugby Australia High Performance to firstly protect the integrity of the Western Force club and Super Rugby Pacific.”

Lewis said that it is disappointing for both clubs to miss out on the competition’s inaugural Super Round, but particularly for Moana Pasifika who are dealing with their fourth postponed match of the season.

“We have made every effort possible to assist in making this game go ahead. Despite looking at multiple player replacement options, the number of players affected is simply too great,” Lewis said.

“We’d like to thank Moana Pasifika for their understanding, and we look forward to meeting them at a later date.”

Lawes in doubt for Down Under tour

England forward Courtney Lawes faces a race against time to play on the tour of Australia in July after suffering a gruesome thumb injury.

Lawes, who captained Eddie Jones’ team for their final three Six Nations matches this year, suffered a compound dislocation of his thumb playing for Northampton in the European Challenge Cup defeat at Gloucester.

“The bone actually came out and it either popped back in or was put back in,” said Saints boss Chris Boyd.

“It was quite nasty and there are some medical decisions to be made around the skeletal function of the thumb and the muscle and ligament situation.”

Boyd was asked if the injury would leave Lawes in doubt for the Australian tour, which kicks off on July 2 with three Tests that month.

“He didn’t want to look at it because he knew it was going to be a bit challenging.

“He certainly needs specialist consultation to make a decision on what is the best course of action for him going forward, but he is as good as can be.”

Meanwhile Marcus Smith, who will play a major role Down Under, has been backed to overcome a disappointing exit in the competiton when he narrowly missed a conversion to win the game for Harlequins.

The English media has been in a tizz over how the youngster might react to the setback after appearing distraught post-game.

His captain, Stephan Lewies, told reporters: “Marcus is absolutely fine, preparing the boys for a good performance this weekend.

“He understands the nature of sport. His maturity for his age is unbelievable.”

Coach Tabai Matson added: “Marcus moves on really quickly which is an important trait for someone in his position and with the amount of responsibility we give him.”

Stan Sport’s Sean Maloney joined The Roar rugby experts Brett McKay and Harry Jones for an enthralling chat about his rise through the Australian rugby commentary ranks, a love of Simpsons quotes, splitting your brain in half, and this weekend’s inaugural Super Round in Melbourne.

Kirwan says RTS needs to go straight into All Blacks

Code hopping Roger Roger Tuivasa-Sheck has played just three games for the Blues since his switch from the NRL, but that’s been enough for him to be thrown straight into the All Blacks squad, according to John Kirwan.

The ABs legend, talking on Sky Sports NZ show The Breakdown, said the proximity of next year’s World Cup meant a chance should be taken with RTS, who is only just back from a shoulder injury.

“For me, he is Sonny Bill Williams,” Kirwan said.

“For me, he has come into our game, I think he’s got x-factor, and I would – and I wouldn’t say this, don’t get me wrong people, I’d never [usually] say this about the All Black jersey – but I would put him in straight away, just because we’ve only got 18 Tests to go.

Roger Tuivasa-Scheck of the Blues gives instructions during the round two Super Rugby Pacific match between the Blues and the Hurricanes. (Photo by Joe Allison/Getty Images)

“I’ve seen enough in his two games, with his feet especially, he will get us over the advantage line.”

Former Highlanders and Crusaders lock Joe Wheeler picked RTS in his Form All Blacks Team on The Breakdown and said the ex-Warriors star would flourish when he develops a partnership with Beauden Barrett.

Hurricanes winger Julian Savea says the spate of red cards in Super Rugby this season is showing that some contact can be hard to avoid and is part of the game.

With 15 yellow cards and three red shown in the past fortnight, and four players handed multi-week suspensions, the issue is on everyone’s minds leading into this weekend’s Super Round in Melbourne.

Savea believes some of the incidennts have been due to players getting positioning wrong.

“When the ball carrier is carrying a bit lower and you have a chop tackler that’s taken the legs, then the second guy coming in can potentially catch the head which I think is part of rugby. It is what it is, I guess it’s not my area,” he told the New Zealand Herald.

“If we don’t get it right, it’s only going to hinder the team.”

Savea said organisers have sent a clear message on their expectations.

“I feel like we are clear. When you see calls that don’t make sense or some make sense with a similar thing, it is kind of hard but it is what it is and we can’t control that. The only thing we can control is in the moment, try to be in a better position to not be in those situations,” Savea said.