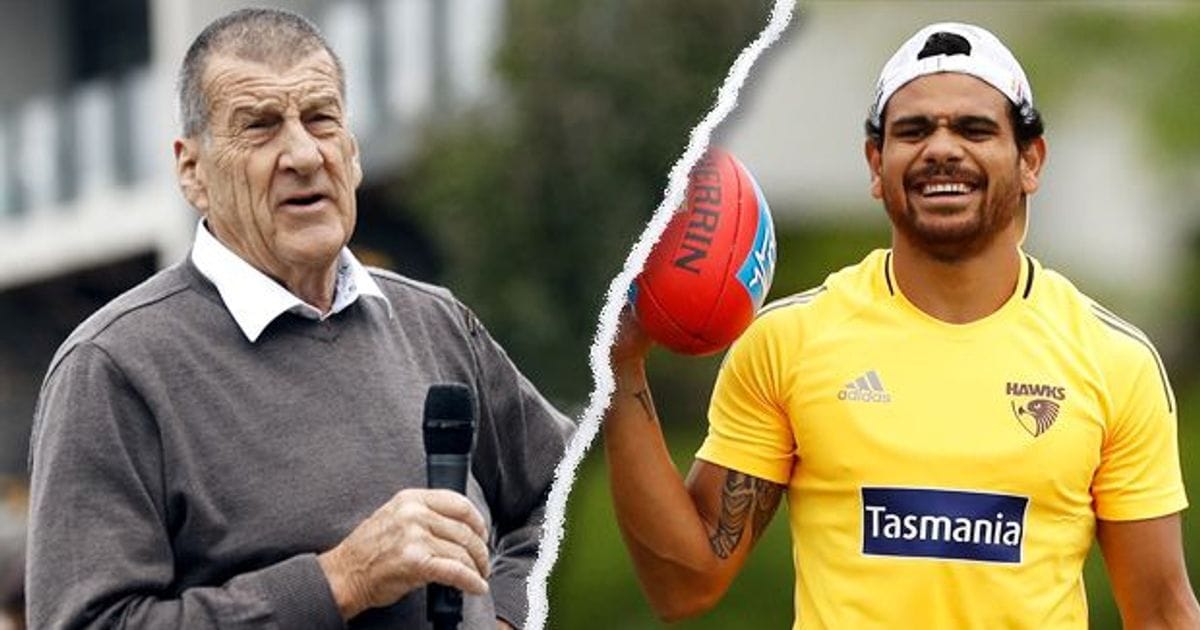 IT HAS been known by Hawthorn Football Club since the days before Cyril Rioli’s shock retirement in 2018 that comments made by club president Jeff Kennett to Cyril’s wife Shannyn were a source of major offence.

In the week Rioli retired, The Footy Show revealed that comments made by Kennett in the Launceston airport lounge about Shannyn’s designer-torn jeans had contributed to his exit from the game.

Rioli on Saturday in The Age revealed he would not return to Hawthorn while Kennett was president.

Kennett refused to comment about this situation at the time in question, and the club also opted not to have any of its words publicly attached to the jeans comments by its president.

Kennett has gone to ground since Saturday. He didn’t attend Sunday’s Hawks-Carlton match at the MCG for COVID reasons.

While the exact words used by Kennett in the Launceston airport lounge will probably never be known, we do know exactly what he said the following year when commenting on crowd issues and security guards at AFL matches.

‘IT SADDENS ME’ Mitchell wants Cyril back in fold

“I’m not being racist when I say this, but when I saw some of the footage, the people who are making judgements while they wear these authoritative coats are not people who appear to have a great knowledge of our game,” he said then on 3AW.

Kennett also used the phrase “new arrivals” in that interview.

The AFL and several senior officials at other clubs were furious with Kennett during this period, particularly when he initially refused to apologise.

Keen, finally, to see what Kennett has to say about the Rioli situation. And keen to see what the Hawks do next, in 2022, about dealing with the specifics of an issue they have known about since 2018.

KEN Hinkley began as an AFL coach a year before Leon Cameron, and has a contract which runs through to the end of next season.

But in many ways, he is in the exact same position as Cameron, with the 2023 season a great unknown for both.

It is always difficult to talk about the futures of very good coaches who, often through no fault of their own, haven’t been able to land the ultimate prize. But history tells us without a premiership, rightly or wrongly, coaches don’t last beyond the timeframes of these two.

That is probably a deeper topic for another day, but club boards inevitably make calls that a fresh approach must be adopted in such circumstances. Both Hinkley and Cameron have been successful in their time in charge of Port Adelaide and GWS.

Hinkley has had wins in four separate finals series, won five finals, and reached a preliminary final on three occasions in winning 121 matches of 205 coaches since 2013.

Cameron has led the Giants to wins in five separate finals series, and seven finals wins. He has reached a Grand Final, and won 100 of 187. That 100th career victory came on Saturday, against Gold Coast, in the Giants’ first win of 2022.

Post match, Cameron, always a pragmatist, revealed his status would not be determined until the end of the season.

“I’m a nine-year coach, 10 years at the footy club, and sometimes trying to work through a contract in the hurly burly of week-in, week-out footy is pretty full-on,” he said.

“I think it’s a really smart decision from the footy club. It’s an honest decision.

“When you’ve been involved in a club for near-on 10 years you want to make the right decision. Sometimes clubs probably don’t get that right, and we’ve seen that in the past, and they have regrets. I don’t want us to have any regrets.”

Both coaches are dealing with adversity in 2022, Cameron without access to his best player Toby Greene until round six, and Hinkley without his All-Australian centre half-back Aliir Aliir and his full-forward Charlie Dixon.

The small club still in a mess

THERE are genuine benefits attached to being a small club in the AFL.

Sure, the high moments may not be as widely acknowledged or celebrated, but of great benefit is how the low moments regularly get ignored and downplayed.

If North Melbourne was a big club, its massive problems, a lot of them self-inflicted, of the past five and a half seasons would have been splashed regularly across news sites and footy programs.

Many teams will lose to Brisbane in 2022, but North’s 108-point loss at the Gabba on Saturday will surely be the heaviest and worst. North only just held on against the COVID-smashed West Coast ‘Replacements’ in round two, and fell away badly against Hawthorn in round one.

Coach David Noble said the club was “embarrassed” post-match. Other comments included a need to “have a bloody good look at ourselves” and an observation that the performance was “not acceptable”.

This, after assistant coach Heath Younie made similarly scathing assessments in late February after a practice match loss to Melbourne. That loss was supposedly a “wake-up call”. There are only so many occasions in which public statements of this type can be made by those in charge.

North had some excuses on Saturday night. Its best player, Ben Cunnington, is out indefinitely with serious illness, and Tarryn Thomas and Luke Davies-Uniacke were unavailable. It is a young list. And the Lions are primed for the most serious of runs toward a Grand Final.

But apart from Nick Larkey, it is difficult to argue that any other player has enhanced his standing in the game in 2022.

Since the Roos’ board inexplicably re-contracted Brad Scott then exited him in 2019 with a season-and-a-half remaining on that fresh contract, before making phone calls to John Longmire, Adam Simpson and Alastair Clarkson, North Melbourne has been a mess. The appointment of Rhyce Shaw was completed without any form of industry-expected process, and now the problem has become Noble’s.

The Swans are up next, followed by the Dogs, then Geelong and Carlton. Ouch.