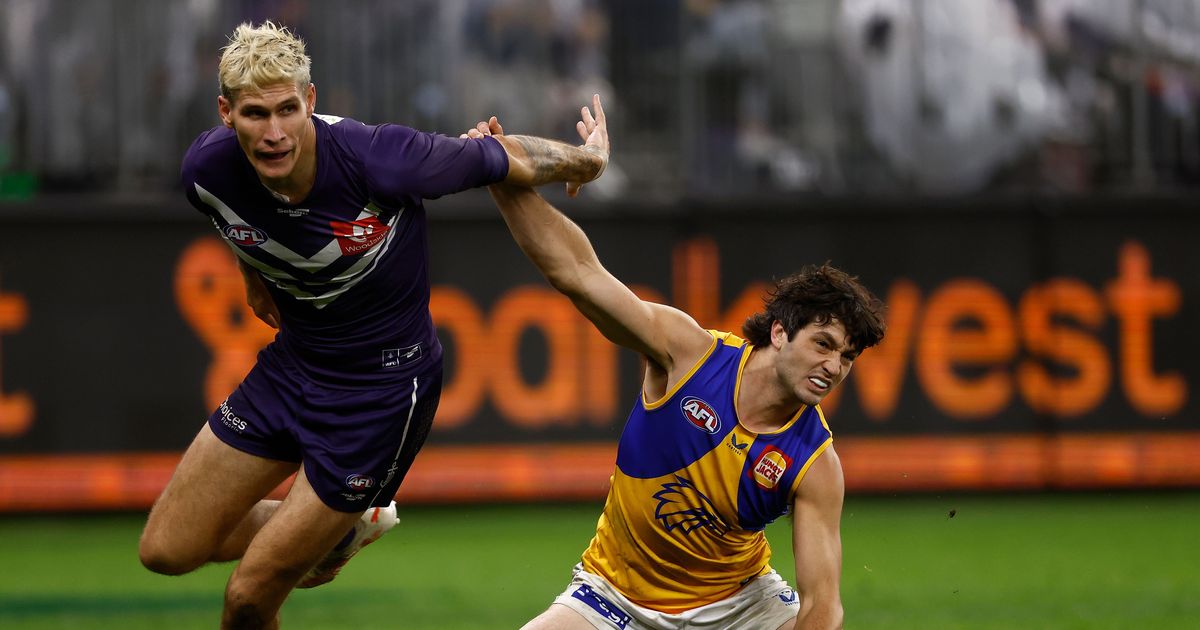 FREMANTLE expects key forward Rory Lobb to be available to take on Greater Western Sydney in the final round of the season after he re-aggravated a shoulder injury in Saturday’s Western Derby.

Lobb, who has played through pain since injuring his right shoulder against Sydney in round 18, was hurt in a marking contest in the third quarter at Optus Stadium and played on before he was substituted in the final term.

Coach Justin Longmuir said the 29-year-old was sore but the club did not think the injury was significant, backing the important goalkicker to recover in time for next Saturday’s clash against the Giants at Manuka Oval.

“We know the injury. He’s been carrying it for three weeks. He just got a stinger on it and couldn’t go on tonight,” Longmuir said after the Dockers’ third straight Derby win, which secured them a home final.

“But we think he’ll be alright after seven days, hopefully.

“I’m proud of his efforts after he got injured to halve some contests and remain in the game and keep working his way through it.

“When you see a player out there carrying an arm, you just want to protect them. That’s why we subbed him out. He’s a fast healer … so fingers crossed he gets up.”

Lobb, who was held goalless by dominant key defender Tom Barrass, would join fellow key forward Matt Taberner (calf) on the sidelines if he does miss the final match of the season, leaving Griffin Logue as the main tall target.

Young tall Jye Amiss booted two goals in the WAFL on Saturday in his return from a kidney injury, while Sam Sturt booted 1.3 for Peel Thunder. Captain Nat Fyfe is also likely to return and could play forward.

“We were holding him back this week so we’re pretty confident he’ll get up next week,” Longmuir said of Fyfe.

“If not, we’ve got a bye and a WAFL game during the bye, so we’ll look at that.”

Longmuir said he expected the Eagles to bring a physical edge to the derby and was not surprised by their pressure, but praised his team’s contest work and ability to play the game in their front half.

He praised ruckman Sean Darcy for a dominant ruck performance, which earned him the Glendinning-Allan Medal, with the ruckman finishing with 57 hitouts and a goal against opponent Nic Naitanui.

The way his team handled the wet weather was also pleasing for Longmuir after several slip-ups this season in greasy conditions.

“I thought we took a step forward with dealing with wet weather.”

West Coast coach Adam Simpson said the team’s leaders had driven the physical edge to Saturday night’s derby, with the team making progress at the end of a disappointing season.

“We played with spirit, good tackle pressure, but we couldn’t sustain it. You can’t question our effort tonight,” he said.

“They played the game the right way. It’s a derby. I wish we could play like that every week.

“There is an edge to the game … the way the game is played these days, the way they all know each other, there is a bit more respect and conversations had and it just doesn’t happen as much.

“They took it to a level that made Freo earn it.”

Simpson said he was campaigning for key defender Barrass to earn his first Therabody AFL All-Australian blazer after another brilliant shutdown job.

As well as keeping Lobb goalless, the 26-year-old finished with 20 disposals and 12 marks, with a game-high 14 intercepts.

“He’s not just winning his position, he is dominating it as full-back. He was the highest-ranked player today, again,” Simpson said.