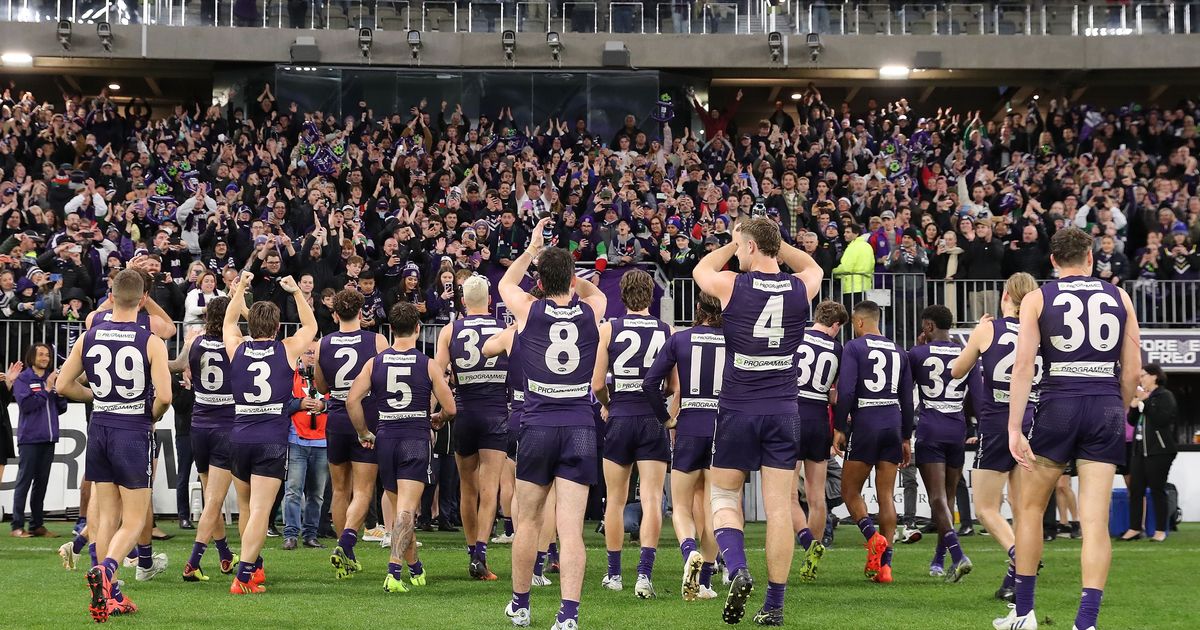 Winning a final after trailing by 41 points in front of a record crowd is simply epic. Every Dockers fan at Optus Stadium will cherish this one. Saturday night’s game marked Fremantle’s first-ever final at the venue and a subsequent club record crowd of 58,982. But the bulk of those fans were left stunned for most of the first half with the margin blowing out to 41 points until a spine-tingling 10-minute burst before the long break brought the game, and the crowd, to life. Michael Walters provided the spark with the Dockers’ first, coming just over an hour after the opening bounce, yet they only had to wait another 20 seconds after the restart for another from Andy Brayshaw, albeit following an ARC review. Caleb Serong and Jye Amiss both goaled in the final two minutes of the half to frenzy the previously silenced crowd. The climax would come in a rousing final term where Freo kicked four goals to one to storm into a semi-final against Collingwood.

Despite finishing three spots higher than the Bulldogs on the ladder, Fremantle’s lack of finals experience made them ripe for an ambush from last season’s Grand Finalists. The Dockers hadn’t played in the finals since 2015 and only four Fremantle players had previously tasted finals footy compared to 20 from the Dogs, and that showed early. The visitors booted the first six goals of the game, opening up a 41-point lead halfway through the second term. During one stretch in the first quarter, Fremantle went 18 minutes without an inside 50. At quarter-time, the Dogs were +15 in contested possession, +30 in disposals and +8 in tackles. It was one-way traffic.

Plenty was expected of the Dogs in 2022 after making last year’s Grand Final but ultimately they under-delivered and the nature of their finals exit will taste extra bitter after leading by 41 points. It’s a significant fall for the Dogs who 12 months ago led the Grand Final by 19 points in the third quarter. The reality is Luke Beveridge’s side was fortunate to even qualify for September, by virtue of Carlton losing their final four games to slip out of the top eight. It will be a summer of soul searching at Whitten Oval after a third elimination finals exit in four years.

Andy Brayshaw’s individual brilliance was recognised this week, winning this year’s Leigh Matthews Trophy voted by the players and he showed he deserved that with an outstanding display with 32 disposals and one goal. But his sidekick, 2020 Rising Star Caleb Serong, was at the heart of the comeback, finishing with a team-high 33 touches including a game-high 16 contested possessions, six tackles and five score involvements along with a goal. Serong’s grit with the Dockers’ backs against the wall in the second term was a sight to behold. In Brayshaw, 22, and Serong, 21, Freo will boast one of the most talented midfields for the next decade.

All Amiss about nothing

When teams dropped on Thursday, there was a hint of desperation about Fremantle selecting second gamer Jye Amiss, who underwent kidney surgery in May a fortnight after his AFL debut. With Nat Fyfe out injured and Matt Taberner’s body not trusted to return from a calf issue – despite being named in the WAFL – Amiss got the nod as the Dockers searched for a key forward target. That decision seemed to backfire when the teenager failed to touch the ball in the first term, before the known sharpshooter inexplicably missed a much-needed goal after marking 10m out. His time would come, though, kicking truly after the half-time siren and adding another to tie the game up in the fourth. Now, does he hold his spot if Taberner is available next week?