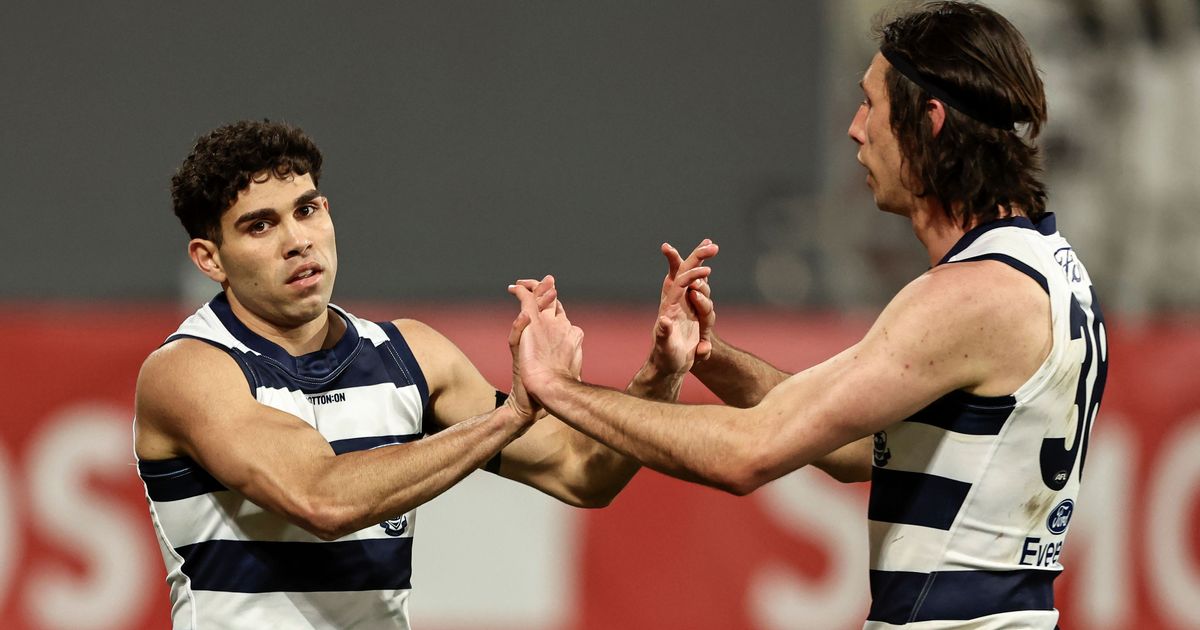 GEELONG will launch its attack on the finals on the back of a 13-match winning run after they beat West Coast by 85 points at GMHBA Stadium on Saturday.

The minor premiers, who were missing Jeremy Cameron due to a hamstring issue, were never troubled, consigning the Eagles to their 20th defeat of the season, a 19.17 (131) to 7.4 (46) mauling.

With top spot locked in, the Cats will next host a qualifying final against either Fremantle, Collingwood or Sydney, with their opponent to be determined on Sunday.

Tyson Stengle continued his stellar first season in the hoops by kicking four goals, while Tom Hawkins also booted four majors to finish the home and away season with 59 goals.

It wasn’t all good news for the Cats, however, with Jake Kolodjashnij subbed out at quarter-time with a concussion, while Cam Guthrie hurt his shoulder during the second term and took no further part in the game, although the Cats said Guthrie’s absence was just precautionary.

Sam Menegola (managed) was a late out, with Ceglar coming into the side.

The Cats took a 20-point lead into quarter time after kicking six goals to three, with Brad Close kicking the first of the game before Jamie Cripps – playing his 200th game for the Eagles – got his side on the board. Geelong booted the next five goals (two of them coming via Guthrie) to jump out to a 31-point lead, but the Eagles responded with two late goals to keep them within touch.

West Coast kicked the first goal of the second term to reduce the margin to 15 points, but it was all Geelong after that, the Cats piling on six unanswered goals to take a 51-point lead into half-time.

The visitors again kicked the opening goal of the third quarter, this time via Liam Ryan after just 40 seconds, but the Cats hit back and the margin ballooned out to 68 points after Gary Rohan, Stengle and Joel Selwood all kicked their second. Geelong’s 62-point three-quarter time should have been greater, with the Cats booting 3.5 for the term.

Cripps kicked the first goal of the final quarter, which was his third for the match, but again, the Eagles couldn’t get any ascendancy as Geelong kept the scoreboard ticking over.

The Cats head into the finals having not lost since Round nine (against St Kilda), while the Eagles venture into the off-season with plenty of soul-searching to do after a horror season.

Memorable milestone for ‘Danger’
Geelong superstar Patrick Dangerfield celebrated his 300th AFL game in style, finishing with 22 possessions (11 contested), nine score involvements and 11 inside 50s. Dangerfield, who made his AFL debut for Adelaide in Round 20, 2008, became the 99th player to register 300 games. In a glittering career, he has won four best and fairest awards (one at Adelaide, three at Geelong), a Brownlow Medal (2016) and eight All-Australian nods. He has polled 230 Brownlow votes, which is third all time (behind Gary Ablett Jnr and Gary Dempsey).

Ceglar or Stanley for finals?
Geelong has two weeks to determine whether they go with Rhys Stanley or Jonathon Ceglar as the team’s no.1 ruckman in September. Stanley, who has played 17 games in 2022, missed Saturday’s clash after experiencing adductor tightness against Gold Coast last week while Ceglar was a late inclusion on Saturday and did his chances of staying in the team no harm, finishing with 24 disposals, a game-high 10 clearances, eight score involvements and 29 hitouts to be one of the Cats’ best players.

West Coast’s nightmare run in Geelong continues
GMHBA Stadium isn’t a happy hunting ground for the Eagles. West Coast has lost its past nine matches (eight against Geelong, one against Sydney) at the venue by a combined 633 points and an average of 73.33. Three of those losses have been by 90 points or more.