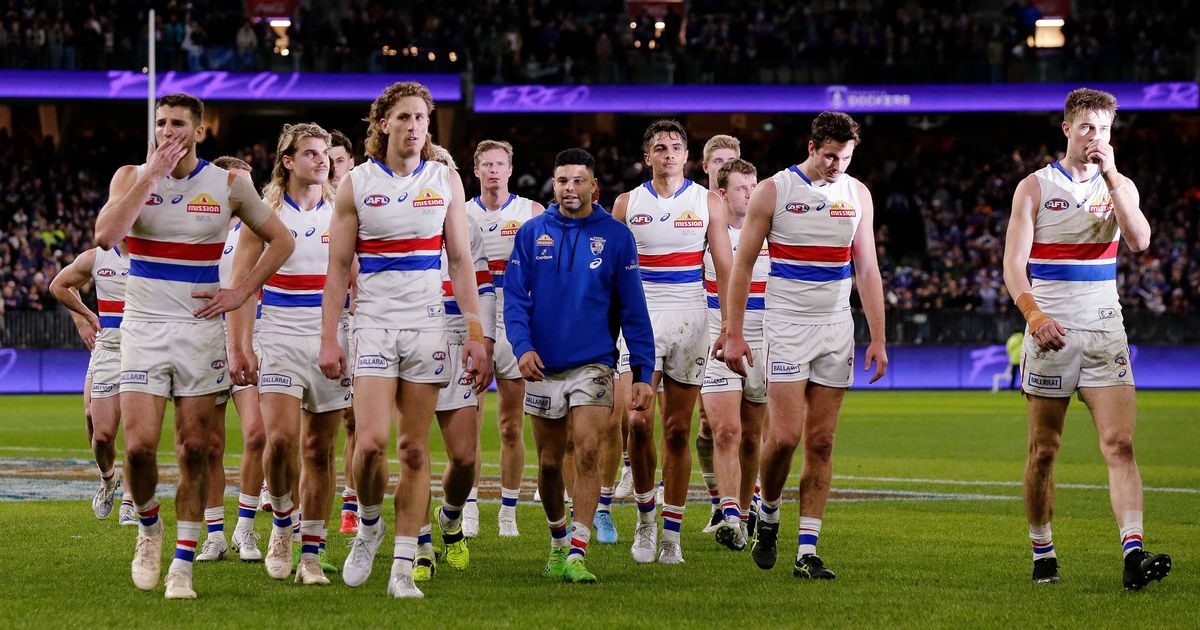 WESTERN Bulldogs coach Luke Beveridge admits he’s not sure if his side ever got over the trauma from last year’s Grand Final defeat after its disappointing season ended at the hands of Fremantle on Saturday night.

The Dogs blew a 41-point second-quarter lead to lose to the Dockers by 13 points in front of almost 59,000 fans at a sold-out Optus Stadium in the elimination final.

Beveridge labeled the Dogs’ collapse as a “death by 1000 cuts”, and it ended an underwhelming season for his side which had high hopes in 2022 after losing last year’s decider.

The Dogs did beat three top-four sides throughout the year but ultimately struggled to find consistency and only scraped into the top eight by virtue of Carlton’s late-season slip.

“I was hoping the trauma of the Grand Final wouldn’t have any lasting effects,” Beveridge said.

“It’s difficult to understand any sort of magnitude on that, whether it did or whether it didn’t. We felt at different stages, with one or two of the significant wins, that we were definitely moving beyond that.

“But all of us as individuals, when we think about what we’re capable of, that we’d self-reflect and say, I think I can be more consistent, I can be better than what I have been for the course.

“That’s what we have to strive for next year. And that has added up to some frustrations here and there.”

Beveridge rejected any association specifically between Saturday’s collapse with last year’s Grand Final at the same venue, where they had led by 19 points in the third quarter before Melbourne ran out 74-point winners.

The Dogs coach revealed that the conversations had already begun in the changerooms among the playing group to find the stimulus for more consistency next year.

The defeat marked their third elimination final exit in the past four years having failed to make the top four, which typically is crucial for a premiership assault, in all those seasons.

“Ultimately there’s a discussion around stimulus for next year and what that means to propel us into a pre-season which we like,” Beveridge said.

“We like hearing that from the players. It’s difficult to talk after such a disappointing experience like tonight. We’ll collect ourselves, we’ll process it a little bit more on Wednesday.

“It’s difficult to talk after such disappointment. There’s a lot of work that goes in by all clubs to try and get an opportunity to play finals. There’s a strong inner belief that we can do better.

“The players are sitting there knowing that at the end of the day we believe we’re more capable than dropping the game tonight.”

Beveridge was scathing of his side gifting Fremantle a way back into the contest after kicking the first six goals of the game, having dominated until midway through the second term.

“We went away from some things that had served us well in the early parts of the game and Fremantle got a little bit better at some of the things they weren’t doing so well early in the game.

“The first couple were probably gifted to them by some things we didn’t do too well … Ultimately it’s significant disappointment. It’s an opportunity missed.”

The Bulldogs may enter the 2023 season without some key players too, with the likes of Josh Dunkley, Zaine Cordy and Jason Johannisen out of contract and linked with other clubs.

Dunkley looms as a key player for the Dogs to secure moving forward but Beveridge admitted he was unsure if he would re-commit.

“(Bulldogs List and Recruiting General Manager) Sam (Power) is talking to Josh’s management and will continue to do that,” Beveridge said.

“There are some unknowns. The free market as far as the player market gets heightened every year. The scope to move clubs, whether free agency or in contract is significant.

“We all have to manage our situation within the ceiling of the salary cap. We’re desperate, we hope Josh is going to stay, but I can’t tell you whether he is or whether he isn’t.

“I can tell you absolutely that the relationships are really strong. If there is a reason to leave the club, it might be for opportunity and the short lifespan of an AFL footy, you have to make hay financially as much as you can, and we understand that.”