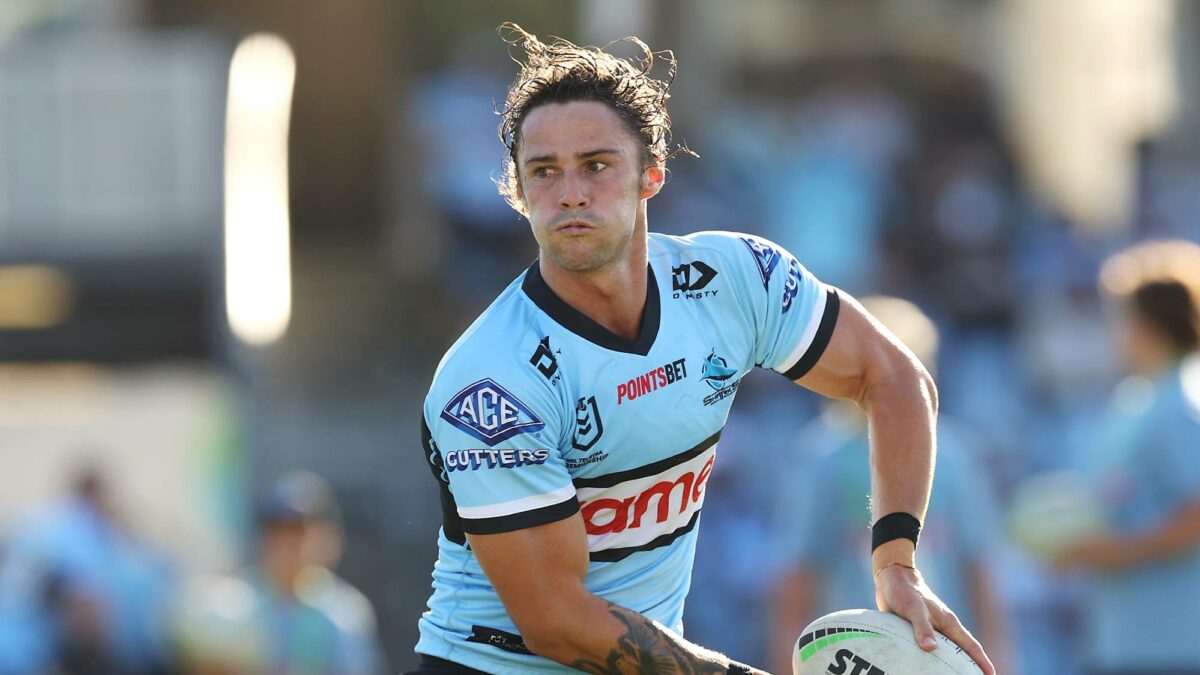 Craig Fitzgibbon went back to the future with his halves and Cronulla’s “free-sprited” duo are reaping the rewards after not being locked into one side of the field.

Off-season recruit Nicho Hynes and five-eighth Matt Moylan have designated sides in the defensive line but when the Sharks have the ball, they are switching between first and second receiver while bobbing up all over the place to keep opponents guessing.

Many students of the game like Andrew and Matthew Johns have been calling for years for teams to reject the modern system of assigning a half to each edge and Fitzgibbon has actually done it in his first season as a head coach.

Hynes and Moylan have played a part in 20 of the team’s 23 tries in the first five rounds heading into Saturday night’s showdown with Melbourne at AAMI Park.

If not for a late Raiders try in Round 1, Fitzgibbon’s Sharks would be undefeated and the catalyst for their hot start to the season has been his playmakers combining with their outside backs.

“They’re free-spirited players. They’re not locked into any particular position there, they’re free to roam and move wherever they are anyway so me trying to lock them in is not going to work anyway,” Fitzgibbon said, breaking into a smile, on Friday during his captain’s run media conference.

“I think it complements their style – they’re running players so we want to get them running and moving around and try to play all different areas of the field, not be so hard to get a read on.”

In Round 1 in Canberra, they scored their first try from a pet play off a scrum then one down the right when Hynes and Moylan combined to put fullback Will Kennedy over and then down the left when Moylan provided for Hynes to send back-rower Teig Wilton away.

The next week in their last-ditch win over Parramatta they went left, right, left and left with their four tries with Hynes combining with Kennedy on either side of the field for the first two before Moylan linked with his half on the left to put Connor Tracey over. Moylan then laid on the match-winner for Wilton in the last minute before Hynes added the crucial conversion.

Cronulla put on a clinic in the wet of Wollongong in Round 3, using intricate sweep plays on each side of the field, scoring three on the right and the other three on the left to bamboozle the Dragons.

After 300-gamer Aiden Tolman crashed over for the first try in Round 4 against Newcastle, the halves laid on the next three in the 18-0 shut-out.

The second try was an example of the pre-season preparations that Fitzgibbon drilled into his squad.

From the left edge, Moylan sends the ball to Hynes, who finds Kennedy, who shuffles it onto centre Jesse Ramien to feed a leaping Sione Katoa and the winger scores in the corner.

Sounds straightforward but this try is a rugby league thing of beauty in that the play gives the appearance of simplicity but it’s quite complicated.

As the move unfolds, 12 of the 13 Sharks are either running decoys or involved in the play.

Left winger Ronaldo Mulitalo sprints across the field to provide an extra option and even though he is not used, it’s one more body in motion hurtling towards the Newcastle defence.

“We’ve put an enormous amount into everything. We trained very hard in all areas,” Fitzgibbon said when asked about their attack, trying not to give too much away.

“It’s the role of the playmakers to put you in positions and execute a plan but everyone has roles and responsibilities in a team. We’ve been pushing hard to have everyone execute their roles individually and then put those together to make a team performance.

“We’ve had periods of that, I think, where you can clearly see it when it works in its full flight. It’s very difficult, depending on circumstances, field position, there’s a number of elements that go into it.

“I think the confidence is coming from the performances. They come in every day asking for me and where they need to improve. They’re not comfortable, we all aren’t, with where we are as a team.”

Cronulla polished off the Knights by attacking down the left when Newcastle’s right winger, Dominic Young, was in the sin bin with a Hynes cut-out pass to Mulitalo resulting in centre Siosifa Talakai scoring. They went the same way soon afterwards even though Young had returned but this time it was Moylan providing for Talakai, who busted a tackle and kicked infield for Kennedy.

The notes on these tries tell you all you need to know about the unpredictability of Cronulla’s atack.

Most of these tries had the look of a team running a training drill against the reserves who have been told not to rough up the senior side.

That won’t be the case on Saturday night when the Sharks lock horns with the Storm.

Craig Bellamy’s squad has the third-best defence in the NRL, conceding 74 points thus far, trailing Cronulla (56) and Penrith (66), although they have the worst ineffective tackle rate at 21.6 per game and are ranked sixth in the unwanted leaderboard for missed tackles at 30.5.

Melbourne suffered a rare loss on home turf three weeks ago against Parramatta and Fitzgibbon said they had taken an in-depth look at that match to glean a few clues on how to take down the Storm.

He’s also had the luxury of Hynes and Dale Finucane giving him inside information after their many collective years playing under Bellamy. Not that he’s expecting anything different to what the Storm always serve up to invaders from the north.

“I think that’s the strength of Melbourne – you kinda know they’re going to play their way and be ultra competitive in every area,” Fitzgibbon said.

While Bellamy has been impressed with Cronulla’s consistency, he has not been happy with his own team’s patchy form – the extra-time loss to the Eels followed by sizeable wins over Canterbury and Canberra.

“We’ve been really good in most parts of the game but we’ve been inconsistent in other parts,” he told reporters on Friday at his pre-game media conference. “Probably when we’ve had the upper hand, we’ve taken the foot off the throat.

“We’ve got to stick to what we’ve been doing instead of looking for other ways to do things so that’s what we’re concentrating on at the moment.

“There’s still some improvement in us but that’s got to come from individuals.”