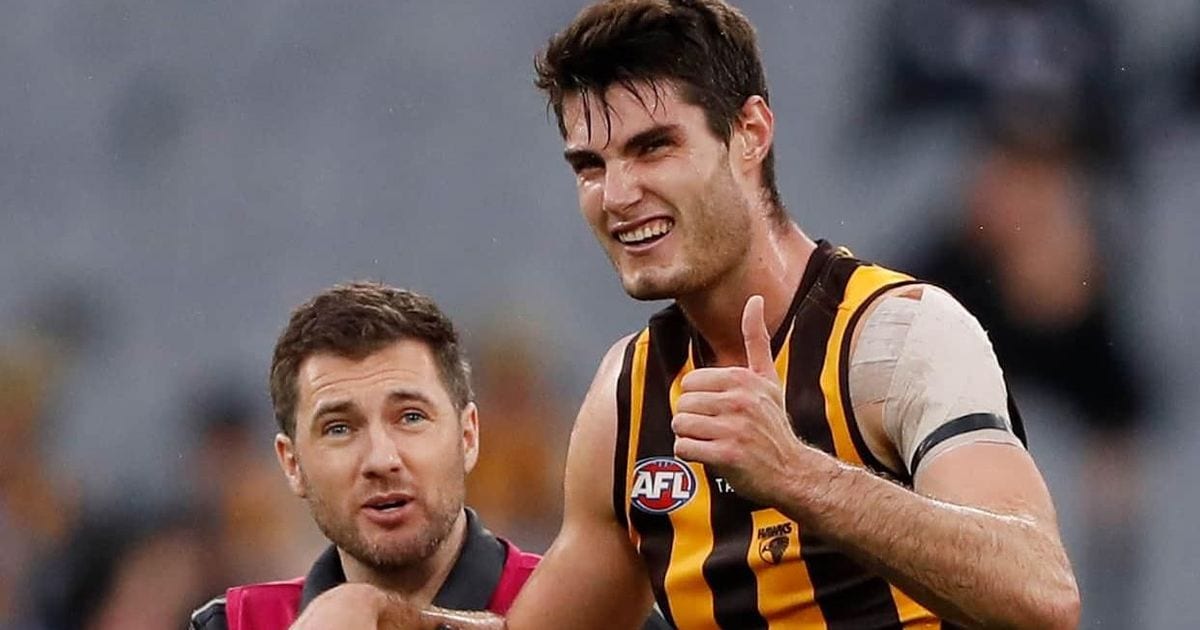 HAWTHORN is on track to regain star midfielder Jaeger O’Meara and young ruckman Ned Reeves for Sunday’s clash against Collingwood at the MCG, after the pair missed the trip to the Northern Territory.

O’Meara was ruled out late last week due to hamstring tightness after dealing with illness before and after the memorable win over Brisbane in round ten, while Reeves hasn’t played since dislocating his shoulder against Geelong on Easter Monday.

With recruit Max Lynch unavailable last weekend and captain Ben McEvoy sidelined with a long term neck injury, the Hawks were forced to face Gold Coast without a recognised ruckman at TIO Stadium, with Jacob Koschitzke required to shoulder much of the load against Suns co-captain Jarrod Witts.

Lynch ran laps with McEvoy, trained away from the main group on Wednesday and is expected to miss a second straight week after suffering a concussion against the Lions, continuing his frustrating start to life at the Hawks since moving from Collingwood during last October’s trade period.

The 23-year-old has played six of the first 11 games due to two concussions and health and safety protocols, around an anaphylactic reaction to a bee sting and a bout of food poisoning.

O’Meara trained with the main group in wet and wild conditions at Waverley Park, while Reeves was put through match simulation and work in the ruck with assistant coach Damian Monkhorst, alongside Jackson Callow, Daniel Howe and Conor Nash.

Hawthorn coach Sam Mitchell said Reeves was close to being available to face Stuart Dew’s side in Darwin after completing a strengthening block and will be cleared to play if he completes training this week.

“Ned Reeves, we’re hopeful (will be available). He got through a training session last week and he’ll do another couple this week. If he gets through all those then he will be available,” Mitchell told reporters at Waverley Park on Wednesday.

“He has enough strength in it now. He was pretty safe in the week just gone. It would have been nice to have a recognised ruck in the side, but he’d only done one contact session. That was sort of enough to technically tick him off, but it wasn’t enough for our threshold for a player who we think is going to be important for our future.

“We want to give him a chance to actually be able to perform at a high level with some confidence in his body. He’ll have four, maybe even five training sessions by the time he gets to game time. If he gets through all of those incident free then he’ll be available.”

“We’ve got the mid-season draft tonight. It wouldn’t be the first time that someone has come in off a mid-season draft and come straight into a team. There’s a possibility for that as well,” he said.

WHO’S IN THE MIX? Every player to nominate for mid-season draft

All-Australian forward Jack Gunston increased his training load on Wednesday but is still expected to miss at least one more week and potentially not be available until after the bye, while last year’s pick No. 7 Josh Ward is progressing through concussion protocols and could return at some level this weekend after missing the past fortnight following a head knock at Box Hill.

Three-time premiership Hawks Luke Breust and Liam Shiels will share a special milestone together when they run out for the 250th time on Sunday afternoon.

Mitchell, who played alongside the pair in that famous three-peat under Alastair Clarkson, said the timing couldn’t be more apt for the understated pair.

“I think them playing together is really special, to be honest. They’ve played so much together, they are such good friends. Most players would think ‘I want my milestone to myself’, whereas I think this is actually perfect for them because they’ve never been guys who have wanted the limelight,” Mitchell said.

“They are both great people, been great servants of the club and produced such fantastic football. The legacy that they’ll both leave and the influence they’ve had on the organisation, on individual players, on the way we do things around here.”