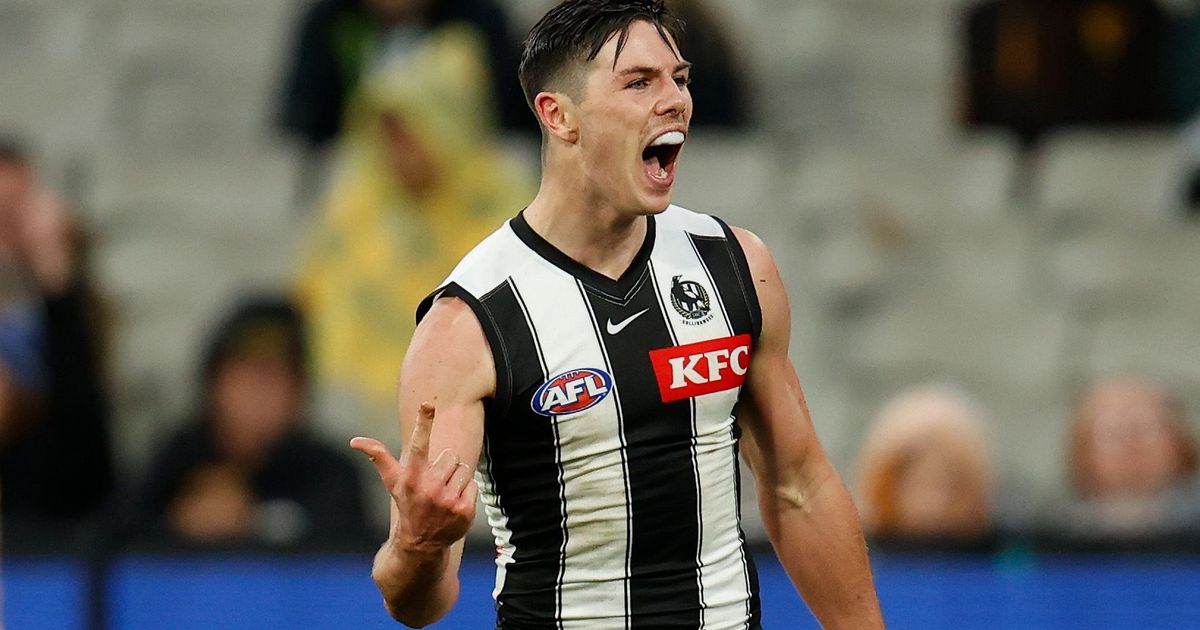 WINTER has arrived and it has delivered Collingwood back into the top eight following a thrilling four-point win over Hawthorn at the MCG on Sunday.

After winning only six games under Nathan Buckley and Robert Harvey in 2021 to finish 17th – the lowest the club has ever finished – the Magpies now have more wins under Craig McRae 12 rounds into a new era.

The first Sunday of winter produced an opening half that looked like it was held at Waverley Park or Victoria Park. It was sloppy, miserable stuff, in stark contrast to seven days earlier on the same patch of grass.

If you were still making your way home from the boxing across town at Marvel Stadium, you didn’t miss much early. Collingwood and Hawthorn produced a forgettable first half that was littered with unforced errors, poor decisions and wasted opportunities.

It took a moment of class, following a moment of controversy from Jack Ginnivan to get the ball rolling early in the first quarter. The Collingwood goal sneak drew a dubious free kick before kicking from outside 50 to put the Magpies on the board in typical Jack Ginnivan fashion.

Then Ginnivan kicked a second after another free kick 20m out directly in front, which quickly became a shot from the goal line after James Sicily gave away a 50m penalty for giving the umpire a piece of his mind.

The Magpies led by as many as five goals in the opening half and reached the main break 21 points in front. Given their command of proceedings, they should have perhaps been further in front, but nonetheless appeared in control.

Hawthorn started picking off that lead. Jacob Koschitzke got the first of the third quarter inside 40 seconds. Luke Breust then plucked a clever pack mark and kicked his first goal. Mitch Lewis kicked his third from 55 metres minutes later, before Sam Butler converted a contentious free kick from a Darcy Moore slide to put the Hawks in front for the first time 16 minutes into the third quarter.

It was all Hawthorn in the wet, a vastly different looking side to the one that was touched up by the Gold Coast Suns in hot and slippery conditions in the Northern Territory last Saturday night. In the space of 15 minutes, the Hawks led for the first time all afternoon and looked set to reach the final break with all the momentum before Ollie Henry re-energised Collingwood with a shot after the siren to put the Magpies back in front.

Henry continued a massive month for the boy from Geelong, following up a match winning performance against Fremantle in Perth – four goals as the medi-sub at Optus Stadium – three against Carlton last Sunday, then another stunning second half to help guide Collingwood home in the wet.

All-Australian defender Darcy Moore has been involved in some high quality match-ups at the MCG in the past month. Mitch Lewis isn’t Charlie Curnow or Tom Lynch, but the emerging spearhead showed he is a key part of Hawthorn’s future by producing another brilliant display, finishing with four goals to move to 27 from nine games – equal 9th in the Coleman Medal race alongside Charlie Cameron.

While Collingwood won a third consecutive game to keep its September dream alive, the Hawks responded after the capitulation in Darwin, but fell just short of marking the 250th game milestones of Luke Breust and Liam Shiels in style.

Rising Star favourites fire in the wet
Nick Daicos and Jai Newcombe have travelled very different paths to the AFL. But the two are the Rising Star favourites after 12 rounds. Daicos is the son of Collingwood royalty, who dominated underage footy before the Magpies swooped at pick No.4 last year. Newcombe was overlooked by the Gippsland Power and battled for a spot at Box Hill before Hawthorn took a punt on the big-bodied midfielder from Poowong in last season’s mid-season draft. Daicos finished with a career-high 36 disposals, 797 metres gained and 11 score involvements. Newcombe was massive when it started raining, amassing 24 disposals, 11 tackles and seven clearances.

Reeves to the rescue
Hawthorn’s fragile ruck situation has been a major talking point at Waverley Park for most of the season. Ben McEvoy has only featured once due to a neck injury. Max Lynch has only been available for half of the games due to concussion protocols and a few other untimely issues. But finally, after seven weeks, Ned Reeves re-emerged at the MCG on Sunday, for the first time since he departed the same patch of grass on Easter Monday with his shoulder hanging out. The Hawks added Max Ramsden in Wednesday night’s mid-season rookie draft, but he is a raw teenager who will take some time. Sam Mitchell will be hoping for more performances like today from Reeves going forward, who won the ruck battle, collecting 30 hit-outs in his first game back.

Two Pies go down on Sunday
Just when Jamie Elliott looked like regaining some momentum in his season, the mercurial forward was a late withdrawal from the game due to illness, paving the way for Reef McInnes to get another senior opportunity. Unfortunately, McInnes didn’t finish the game after dislocating his shoulder in the second half.