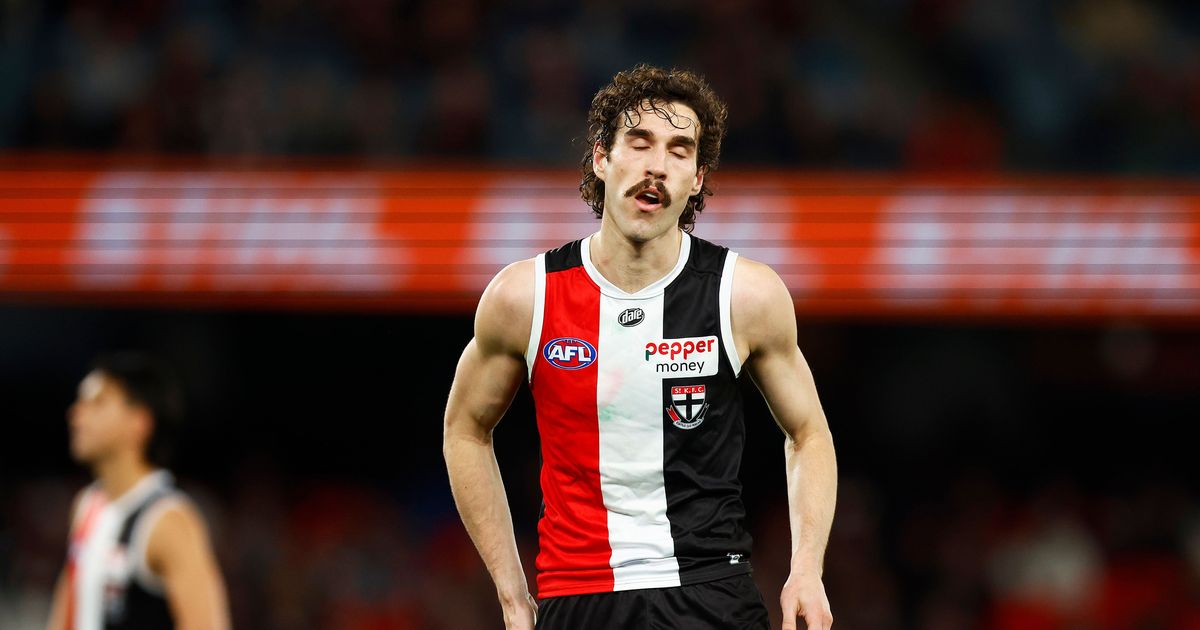 The Saints’ finals hopes are all but over after their 15-point defeat to the Lions at Marvel Stadium on Friday night, with the club being overrun after leading at three-quarter time by five points.

King kicked 0.5 for the night, including four set shots and a number of relatively straightforward kicks, with his season tally now at 47 goals and 41 behinds.

Ratten said the club wouldn’t look for any external help to assist King’s goalkicking, after last year closing down an option for the 22-year-old to work again with champion forward Matthew Lloyd, who had coached him at school level with Haileybury.

“The pleasing part that we know about Max is Tuesday was a day off for the players and he was at Marvel Stadium for an hour and a half having goalkicking practice. Every day we’re at the footy club or we’re not at the footy club he’s there having extra goalkicking and rehearsing and finetuning his game to make sure he gets his opportunity to score on game day,” Ratten said.

“He’s doing a power of work. What I do know is I want Max King in my corner. He’ll be at our footy club for 10 years. When we look back we’ll be saying what a great player he is and what he’s done. Tonight he had a night where it didn’t work for him. He did everything right bar the finish and for great forwards in the game that’s happened.

“We know he’s doing the work and sometimes you don’t get the reward all the time but he’ll keep doing that and you watch, he’ll turn it around.”

He said there were many factors behind inaccuracy, which wasn’t exclusive to King as the Saints booted 5.10 after half-time.

“Goalkicking has so many elements to it – it’s the technical aspect, the mental aspect, the fatigue, what part of the ground [you’re kicking from]. I wouldn’t say it’s high pressure. I want to go to war with Max because he delivers and he will deliver,” Ratten said.

The loss continued an inconsistent second half of the year for the Saints, who have lost seven of their past 10 games after starting the season with eight wins from their first 11.

Ratten pointed out Marcus Windhager’s performance as a positive, with the first-year Saint tagging Brownlow Medal favourite Neale throughout the night and keeping him to a season-low tally of 16 disposals. Windhager had 21 touches himself.

But Lions coach Chris Fagan questioned the off-the-ball tactics of the Saints at keeping Neale out of the contest.

“We felt that he would get tagged by Windhager and he did a good job, but what I liked about Lachie is he never stopped having a crack and did a lot of selfless stuff for his teammates tonight around stoppages that probably don’t get any stat but make us better,” Fagan said.

“It was interesting how he was tagged, I’ll just say that, that he was blocked off the ball and various other things during the night. But I guess that’s the way it goes. He gets pretty rough treatment I reckon.”

He said he would dissect the vision before deciding whether to speak with the AFL about the treatment of his gun ball-getter.

“I’d like to have a look at the tape and see what it looks like. I know it happens a lot but players shouldn’t get blocked from getting to the ball like he does,” Fagan said.

“I want all ball players to be looked after, not just the blokes in my team.”