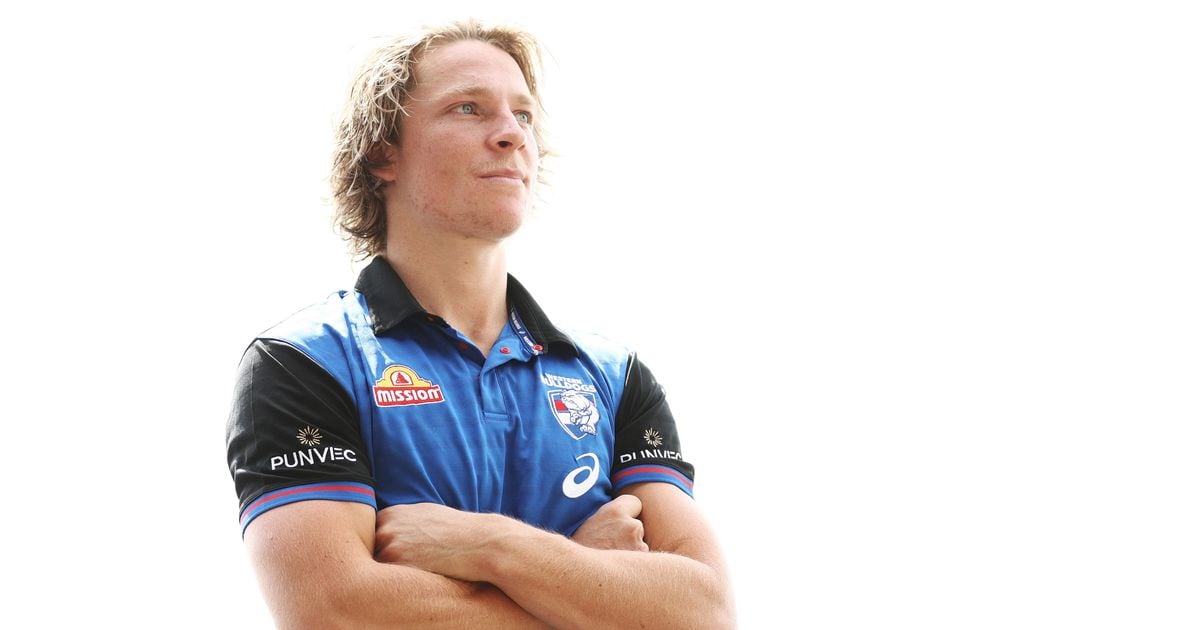 It’s not the first time he has gone off the grid and it won’t be the last.

The young Western Bulldogs star has made a habit of switching off a long way from home. First he went to Bali solo ahead of the draft in 2019.

Then he bought a car in Queensland and gradually drove back down the east coast over the course of a month after exiting the hub.

But this time was different. Life is different now for Weightman.

The 21-year-old has only played 19 games, but the pocket rocket with the blonde mop and the jaw-dropping hop has quickly built a cult following after bursting onto the scene in the second half of last season.

When the Western Bulldogs’ pre-season camp in Warrnambool ended last Wednesday, Weightman didn’t return to Melbourne or fly up to Noosa – like some of his teammates – he whipped out his tent and spent some time reflecting on how he got here and where he is going from here.

“I try to do it every year now. You just have a lot of time to think and you don’t have to be on anyone’s watch. I call people. I surf. This time last year I did three or four weeks of it. I find it gives me good clarity,” Weightman told AFL.com.au from Whitten Oval.

“There’s a lot of pieces and stuff flying around in the AFL. You sometimes forget to stop and put them together. I find this does it for me. It’s something that’s good for me and it has worked.

“I bought a car up in Queensland and did the east coast and stopped after an hour a day and just cruised back in no rush at all. It was a time where I was getting really curious and listening to a lot of podcasts – self-development stuff. I like listening to successful people and picking up clues that they leave. I just find that that connects the dots for me when I’m alone.”

Weightman has been connecting the dots for in a different way this summer.

The boy from Beaconsfield underwent foot surgery a week after last September’s Grand Final loss to Melbourne and has been working his way back to full fitness across the pre-season.

It has meant plenty of time on the Alter-G treadmill and on the bike next to Josh Bruce and Toby McLean indoors, away from the main group.

He first injured his foot in a makeshift scrimmage game in the hub, but the Dogs’ head of sports medicine, Chris Bell, developed a technique to strap it, which allowed him to play in 2021, making his performances in year two even more impressive.

Now Weightman has been cleared to return to full training after ticking off the final checks of his rehabilitation.

The goal sneak will put his hand up to play in the club’s practice match against Essendon later this month, with the Grand Final rematch against Melbourne in round one less than five weeks away.

“They just strapped my foot real heavily all year and it was actually pretty good. It hurt for about the first ten weeks of the year then it went numb and dead and it was fine just playing on it,” he said.

“Other than the fact it took about 15 minutes to strap pre-game – which was a pain in the arse – my foot was just locked in. Belly pretty much invented the technique. I had to strap it myself during the Chrissy break and I filmed a tutorial and it was random as.

“I’m still in the hunt for round one. I’ll get a bit of match play, build that tank back up. I’ve come back fitter than I thought I would, to be honest, in terms of rehab running.

“There is always going to be that match running that just gases you. I think I need to get a fair bit of that done. It will be nice to get a little block of that and see how I’m feeling and how the foot is feeling.”

This time last year, Weightman was still a relative unknown after playing three games in his debut season.

Small forwards aren’t traditionally picked in the first round – Eddie Betts was taken in the pre-season draft, Stephen Milne, Luke Breust and Tom Papley were all selected in the rookie draft – but Weightman has always looked like a top-end talent.

He captained Haileybury’s First XVIII, dazzled for the Dandenong Stingrays and starred for Vic Country to earn All-Australian selection in his draft year.

The Western Bulldogs eventually pounced at pick No.15 in the 2019 NAB AFL Draft, three spots after Melbourne drafted Kysaiah Pickett. And now we know why after Weightman kicked 26 goals from 16 games in 2021, including two hauls of four, plus a sizeable highlights reel.

“I’m looking forward to training, doing the scratch matches and playing now with a newfound belief that I didn’t have at this time last year. I feel confident that I can match it out there now. I look forward to that,” he said.

“I started exploring what went wrong for me in the past and learning from that. The dots started to connect at this time last year, so I’m in a different position now, but still trying to connect some dots and learning about my game and what makes me tick.

“It’s a new challenge coming off less base, but it might be good for me, I might have less kms in the legs but might more to give later in the year.”

While most draft watchers and Western Bulldogs supporters knew about Weightman well before the closing stages of last season, the entire football world was talking about him after his four-goal performance ended Essendon’s season in the elimination final win in Launceston.

Essendon supporters viewed him as public enemy number one and went after him on social media after all four of his goals came from free kicks.

Fortunately for Weightman he was on the road with the team instead of sitting in his car on the way home from the ground.

Lachie Hunter told him to put his phone on the table at dinner and the boys just watched as his phone lit up like a Christmas tree.

Weightman shrugs his shoulders and doesn’t let too much on, but those inside the football club know it hurt the happy-go-lucky livewire, who hasn’t quite been bruised by the harsh reality of life in the AFL just yet.

The fact he was insulated from the public amid another Melbourne lockdown helped, as did the praise he received internally for a performance that set the Dogs on a path to the Grand Final.

“I got my phone on the bus and I actually didn’t realise until an hour post-game that I was copping it. I got on the bus and I turned my phone on and I was like, ‘what the f*** has happened?’ It had blown up,” he recalls as we sit on a balcony overlooking VU Whitten Oval.

“We were back at the hotel and had a great community around me. I was lucky in that sense, it wasn’t like I was going home to an empty house and get to stew on it.

“When we were eating dinner that night ‘Hunts’ said just put your phone on the table and leave it there.

“It didn’t turn off the whole of dinner it was like ‘doont, doont, doont’. It was pretty crazy.

“Other than that there has been a few moments where it is a bit crazy – and there is no book on it – I still have repercussions from that game.

“When I’m out now, the ones that do go after you and try and provoke you are often Essendon supporters who are stewing on it a bit.”

Weightman, like all draftees from the past two years, has spent the majority of his AFL career playing and living amid a pandemic.

It has meant real life interaction has been limited, with minimal fan interaction and games played behind closed doors.

While Bailey Smith attracts an unprecedented level of attention that some compare to NBA players, and Marcus Bontempelli has quickly risen to be one of the AFL’s biggest superstars, Weightman has also had to adapt to rising from anonymity to stardom in a short space of time.

“There is not really a book or anything on it, you just learn on the run with that sort of thing, and I’m probably still learning,” he said.

“It’s probably only been the last six or so months that I’ve actually had the real-life contact of that, because I’ve been locked up in a hub for most of my footy career so far where you are protected from all that.

“It’s been great to be out and about and have people embrace you.

“There is a few who do quite the opposite and don’t embrace you, which is something I don’t love but it’s part of the itinerary and the job I think.

“I’m pretty good at not letting it faze me and I feel sorry for them more than anything to be honest, it’s not something that I worry about it, it shouldn’t bother them that much if I play well against their team or something like that.”

Luke Beveridge and the match committee at the kennel will be without star spearhead Josh Bruce for most, if not all, of 2022 and will need to find another avenue to goal if the Dogs are going to make another premiership tilt.

The club is hopeful 2020 No.1 pick Jamarra Ugle-Hagan can help provide Aaron Naughton – who was named in a new five-man leadership group on Monday – with some support inside 50 in 2022.

Ugle-Hagan struggled to transition from underage football to the big time last year, managing only five senior appearances after having his professionalism questioned internally.

But after a pre-season where the focus hasn’t been on him, Weightman thinks the young key forward is much better prepared this time around, just like he was ahead of year two.

“I’ve been really happy with ‘Marrsy’. I can definitely see similarities (between him and my paths). He’s probably a bit more of the publicity and the attention, but I feel like he’s on a similar trajectory in terms of a higher pick, come in in a rush and want things to happen, then realising it doesn’t happen that way instantly. He’s put in the work,” he said.

“I think his was more physical over the summer, where mine was probably more mental to build the clarity and resilience to know what I needed.

“From that, he’s starting to see the benefits on the track. He seems like he’s in less of a rush and a bit more confident around the club, whether it is round one – or if it’s like me and it’s round nine – I think he’ll be ready this time.”

DEGREE OF DIFFICULTY Who has the hardest draw? We break down the 2022 fixture

Weightman’s tent is back in Melbourne. Another solo adventure is in the memory bank. His foot is back to 100 per cent for the first time in a long time. Now he is ready for his first full season in the AFL.