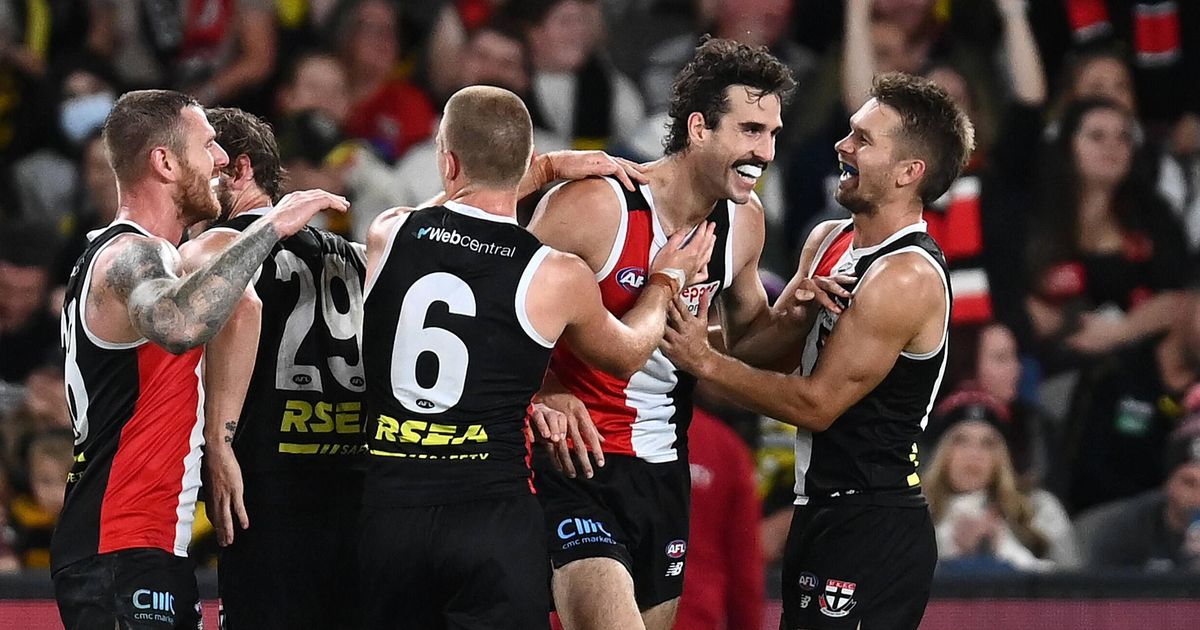 These are but some of the trademarks of a key forward’s breakout season, when a young tall forward makes the leap from regular goalkicker to regular gamechanger. When they step up from a season tally of 30 or 40 goals and really start to impose themselves on the competition.

It is what – albeit four rounds in – 2022 is shaping to be for St Kilda’s Max King, who has strung together three consecutive hauls of four goals since round two to be equal leader of the Coleman Medal and strapping the Saints onto his shoulders in the process.

King is into his fourth year at St Kilda but his third season at the level after injury ruled him out in 2019. Last year was a developing season, when he jumped from the 22 goals he kicked in the shortened 2020 campaign to 38 in 2021. But already in the opening month of 2022 the Saints star has lifted to a dominant presence.

Some inaccurate moments were costly in round one against Collingwood when King kicked 1.3, but since then he has kicked 12.5 and turned the game for the Saints against the Dockers in round two before being the final-quarter hero against Richmond in round three. He was one of four Saints to kick four goals in a scoring feast against Hawthorn last Sunday.

King has always been an active inside-50 player who has amassed large amounts of shots on goal. In his draft year, before he went down with an early-season knee reconstruction, King kicked 8.5 one game, with his marking exploits matched by his on-ground talents. Last year, his goalkicking confidence deserted him at stages but he still totalled 68 scoring shots (38.30).

The 21-year-old rising into the competition’s leading goalkickers this season would see him ahead of schedule in comparison or at least tracking at the same time frame.

Of the leading key-position goalkickers currently in the game, it was former Giant turned Cat Jeremy Cameron who came of age earliest, breaking the 60-goal barrier in just his second season (62 goals in 2013). Then Hawks superstar Lance Franklin did it in his third year, when he kicked 73 goals, while Adelaide’s Taylor Walker (63 goals), Tiger Jack Riewoldt (78 goals) and ex-Roo Ben Brown (63 goals) all made the jump in their respective fourth seasons.

Others have taken a little longer. Joe Daniher’s first big season with the Bombers came in year five, when he kicked 65 goals in 2017 and won the best and fairest, while Harry McKay last year won the Coleman Medal for Carlton in what was his sixth season at the Blues since being drafted at the end of 2015.

McKay is in good company in taking until his sixth season before the goals started to flow frequently. Current Tiger and then Suns forward Tom Lynch went bang in his sixth year when he kicked 66 goals, while Tom Hawkins had played in two premierships in his first five years but in his sixth season lifted several notches to slot 62 goals for the Cats.

West Coast champion Josh Kennedy, too, got past some early injury interruptions to launch in his sixth season when he booted 59 goals, the first significant tally of his brilliant career.

WHEN DID THE BEST KEY FORWARDS HAVE THEIR BREAKOUT YEAR?