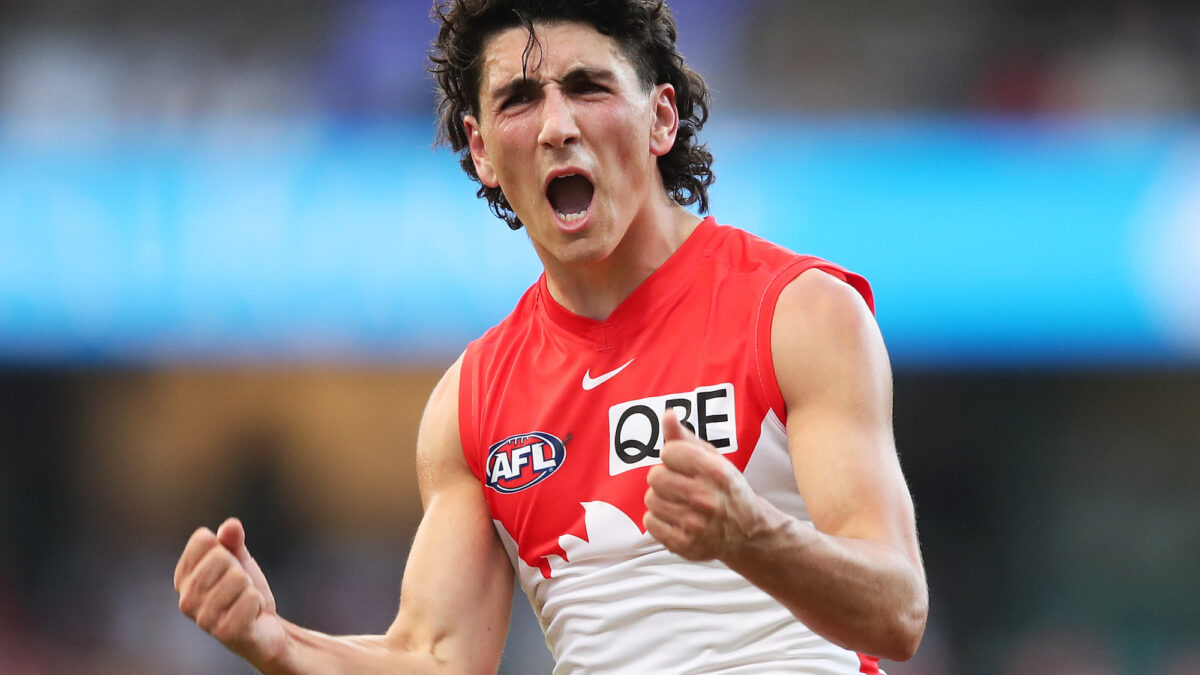 Round 6 was characterised by the Anzac spirit. Some teams had the strength to rise above themselves, while others had nowhere to hide.

Mick Malthouse’s stirring speech was eerily prophetic. There was a mixture of teams that could hold their heads up high, while others would lament their performances.

The story of the round was the Swans coming back from a five-goal deficit to win by 41 points against a hungry Hawthorn team. The Swans may well be the biggest challengers to the Demons at this stage.

There’s no disputing that Round 6 was a long weekend of footy to remember.

Adelaide Crows: a team on the rise

The Crows are building something. Two of their three wins have gone down to the wire. The move of Billy Frampton into defence is clearly working, as he never stops working. Taylor Walker has brought a winning mentality to the team, as he has averaged the most goals of any player in the competition, with an average of four goals in his three games. They are a team clearly playing for the coach, and their system is stacking up. There’s a good mix of youth and experience.

The Lions won the QClash comfortably despite having only two more scoring shots than the Suns. The Lions did a good job to have an even contribution – they had 11 goalscorers despite Zac Bailey kicking six for himself, with Charlie Cameron kicking four and Joe Daniher three. The only player to have more than 26 disposals for them was Jarryd Lyons. The great part about their Round 6 performance is that there’s still room for improvement, as they had 14 fewer hit-outs than the Suns along with seven fewer clearances, 11 fewer stoppage clearances and four fewer inside 50s.

Carlton Blues: they weren’t good enough but did it tough

The Blues lost Marc Pittonet, arguably one of their most important players, in early in the game. It meant they had 32 fewer hit-outs than the Dockers. Patrick Cripps was outstanding, finishing with three goals. Carlton had the top five disposal getters in the game, which shows how deceptive stats can be. They had 18 fewer inside 50s than the Dockers. The Blues still haven’t won a second quarter in 2022!

Collingwood had 18 scoring shots to the Essendon’s 22. Fortunately for them, they kicked 15 goals and only three behinds. The Magpies were outplayed in the key stats, with one fewer hit-out, 12 fewer clearances, seven fewer centre clearances and nine fewer contested possessions, but despite that, they won the game by 11 points.

Essendon Bombers: they never gave up, but it wasn’t enough

The Bombers won most of the important stats, finishing with four more inside 50s to go with having four more scoring shots than the Magpies. Darcy Parish had the most possessions in a half of any player ever in the AFL since records have been kept, accumulating 30 disposals. Alec Waterman deserves praise, as he kicked four goals and nearly dragged the Bombers over the line himself. They took the game on, which is probably why they finished with five more turnovers than the Magpies.

Fremantle Dockers: a win to savour

The Dockers made it five wins from six games in 2022 partly due to their miserly defence. The only game they lost was against the Saints by ten points in Round 2. They’ve done it all without their inspirational captain, Nat Fyfe. They deserved the win over a Blues team that’s been in good form. Despite that, the Dockers had ten more scoring shots than Carlton. The pressure outside the contest was exemplary. Their belief is growing.

Geelong Cats: a practice match where the tall timber came to the fore

Geelong’s two key forwards, Jeremy Cameron and Tom Hawkins, kicked 11 goals between them. It was a game they controlled for the most part. The Kangaroos didn’t provide much opposition despite the Cats being without Patrick Dangerfield. Geelong’s system was far superior to the Kangaroos. They would’ve been disappointed they lost the last quarter by four points, but they can be forgiven for it considering they already had an unassailable lead, the result long beyond doubt.

The Suns would be disappointed with their kicking accuracy, as they had 25 scoring shots to Brisbane’s 27 yet lost the game by 52 points. They were competitive, but they had only a few players who could be content with their performances. Jarrod Witts worked tirelessly in the ruck but to little effect; he finished with 48 hit-outs to Brisbane’s 41. Noah Anderson fought hard, finishing with a game-high 33 disposals. Despite that, the Lions had four more centre clearances than the Suns. Based on this game, it’s time for Stuart Dew to drop some players to the reserves.

GWS Giants: they have a giant problem

The Giants threw everything at the Saints but ultimately weren’t good enough. GWS had 58 more hit-outs than St Kilda and ten more clearances, which shows how deceptive stats can be. Players of the ilk of Tim Taranto and Harry Himmelberg weren’t up to the standard that they are capable of playing at. It was impossible to expect miracles in Toby Greene’s first game back from suspension, but to be brutal, he didn’t contribute much considering he’s usually a matchwinner. Josh Kelly and Callan Ward were two shining lights on a bleak night. They still haven’t won a fourth quarter in 2022.

Hawthorn: a great start but then fell apart

Hawthorn impressively kicked the opening 32 points of the game and ended the quarter with 34 points, their highest scoring first term in 2022. But it was a 73-point turnaround from there. They clearly missed the run out of defence of Changkuoth Jiath as well as Ned Reeves and Ben McEvoy in the ruck. There’s no disputing they could’ve used Mitch Lewis as a target up forward. As a positive, their defence held up well for three quarters, and they led at the end of every quarter – apart from the only one that really matters. There are ultimately going to be teething problems for them in Sam Mitchell’s first season as senior coach.

The Demons played the perfect game apart from their inaccurate goal kicking. They embodied the Anzac Day spirit, as they trailed the Tigers by three points at half-time but fought back to control the game. They played selfless footy to finish with 31 scoring shots to Richmond’s 14, but Melbourne won by only 22 points. They would’ve beaten any team in the competition.

North Melbourne Kangaroos: too much left to too few

The Kangaroos are in massive trouble. They aren’t generating an even contribution. They were obliterated by a Cats team that were far too good in all areas of the game. The Kangaroos did have players have a go: the likes of Jy Simpkin, Cameron Zurhaar, Luke McDonald and Luke Davies-Uniacke never stopped trying. Jason Horne-Francis put in a decent effort but is only starting his career. A statement has to be made at the selection table. There’s no disputing that Todd Goldstein is a good leader, but he should be dropped and a total rebuild should be started.

Port Adelaide Power: after quarter-time their season was kept alive

The Power did a good job to possibly resurrect their season after the game after the scores were level at quarter-time. They won the last three quarters by 84 points. Despite the fact they played against the Eagles, who are an inferior opposition, the Power were relentless and didn’t take the lead they accumulated for granted. It was an even contribution featuring ten different goal kickers despite Jeremy Finlayson and Todd Marshall kicking five goals each. Their attack on the footy and ball movement and goal kicking was at its best.

Richmond Tigers: the scoreboard flattered them

The Tigers showed great endeavour but were outclassed. They did have the same amount of centre clearances as the Demons, but they had 15 more turnovers, which would be a concern for them. They couldn’t get any flow into their game. Incredibly, they led by three points at half-time despite having less than half Melbourne’s scoring shots by the end of the game. They were fortunate not to lose by more than ten goals, as Melbourne had 22 more inside 50s.

St Kilda Saints: a team to take notice of, but they could have a King size problem

The Saints game plan had to be changed when Jack Hayes suffered a season-ending knee injury, so they made some alterations that meant Rowan Marshall had to be the sole ruckman against two GWS counterparts, Matt Flynn and Braydon Preuss. Then St Kilda lost Rowan Marshall to a quad injury. They had to turn to Josh Battle to ruck. Every player for the Saints played their role, but too many of the Giants went missing. They may have won the game by 17 points, but their seven extra scoring shots can be attributed to Max King, who kicked one goal and seven behinds. There’s no doubt he has potential, but he needs to work on his goal kicking.

Sydney Swans: a win to savour

This was the most points the Swans have conceded in any first quarter this season. Peter Ladhams clearly benefited from Hawthorn coming into the game without two of their best ruckmen, as Sydney had 13 more hit-outs than Hawthorn. The Swans also had nine more centre clearances. They never gave in despite trailing for the majority of the game. Sydney had 26 more inside 50s but benefited from that domination on the scoreboard only in the fourth quarter. There’s so much depth with Josh Kennedy as their sub. Fortunately the head knock that Paddy McCartin was subbed out with isn’t serious.

West Coast Eagles: there were no positives

The Eagles may have been level on the scoreboard at quarter-time, but they didn’t fight after that. They have had injuries to key players and COVID dramas, but there are certain non-negotiables that they didn’t meet. They have lost every second quarter in 2022, which doesn’t help. They looked devoid of a system, disjointed and even disinterested. There was nothing to take out of the game, as they were atrocious.

Western Bulldogs: they never gave up

The Bulldogs weren’t at their best. There’s no disputing that Tim English and Lachie Hunter were big losses. They had 11 more turnovers than the Crows. That’s ultimately where the game was lost. Josh Schache showed that he warrants more time up forward, as he kicked two goals. Stefan Martin battled manfully in the ruck, but the Crows had 23 more hit-outs. The Bulldogs also had six fewer scoring shots than the Crows but lost by only a point.