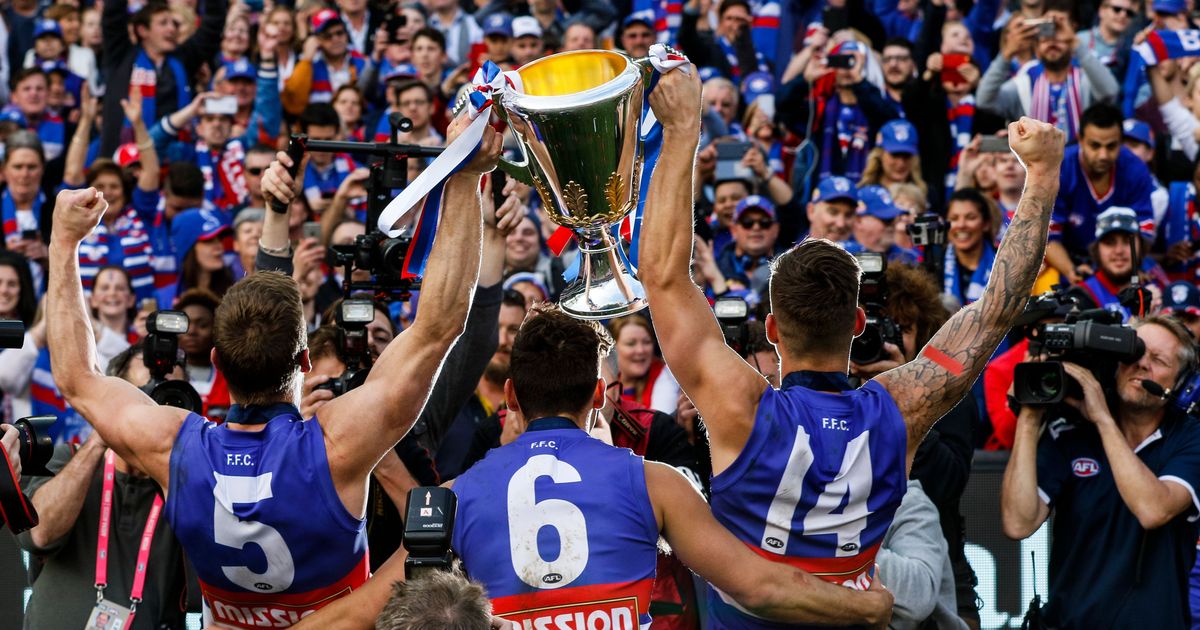 THE DEBATE this week around the pre-finals bye is focused on hope versus fairness, and whether the ledger has tipped too far in favour of giving the lower half of the top eight a leg up in September.

The numbers are indisputable that the pre-finals bye, used from 2016 to 2020 and again this season, gives teams from fifth to eighth a better chance of success.

They also make clear that finishing in the top four and even the top two is not the advantage it used to be, and winning a qualifying final does not give you the best statistical chance of reaching the Grand Final.

MEGA-PREVIEW Cats v Magpies, stats that matter, who wins and why

The current finals system has been in place since 2000, when it replaced the McIntyre final eight system, while the pre-finals bye was first used in the Western Bulldogs’ premiership year of 2016.

It was given a year off in 2021 due to COVID-19 disruptions, with the week off placed in front of the Perth Grand Final instead.

Perhaps the most compelling of all statistics raised this week is the fact that 2017 was the only year that both qualifying finals winners also won preliminary finals and progressed to a Grand Final under the pre-finals bye.

MEGA-PREVIEW Lions v Tigers, stats that matter, who wins and why

Of the 10 teams that won qualifying finals in that period, thus earning a second week off in three weeks, six have then been beaten in preliminary finals.

Before the pre-finals bye, from 2000-2016, 28 of 32 teams who earned that week off following a qualifying final win went on to feature in the Grand Final.

There can be no doubt that the advantage of winning a qualifying final has been diluted.

Finishing in the top two has also proved to not be the advantage it used to be, at least statistically, with only three of the 10 teams to finish first or second under the pre-finals bye playing off in that year’s Grand Final.

MEGA-PREVIEW Dockers v Bulldogs, stats that matter, who wins and why

That is down from 23 of 32 teams before the pre-finals bye, with no top-two team ever being eliminated in straight sets under that system.

The 2019 Brisbane team lost both finals under the pre-finals bye after finishing in the top two.

Finishing in the top four remains a significant statistical advantage, with eight of the 10 Grand Finalists under the pre-finals bye system coming from top-four teams at the end of the home and away season.

MEGA-PREVIEW Demons v Swans, stats that matter, who wins and why

The hope side of the equation is illustrated statistically by the number of preliminary finalists that have come from positions five to eight under the two systems.

This rate has increased significantly with the benefit of an extra week off before finals, with three of 20 teams reaching preliminary finals from positions fifth to eighth – the Bulldogs (2016), Melbourne (2018) and Greater Western Sydney (2019).

Two of them have gone on to reach Grand Finals – the Bulldogs and GWS – where none were able to under the prior system.

AFL chief executive Gillon McLachlan defended the pre-finals bye this week, highlighting that top-four teams still had a distinct advantage in the race for the premiership.

“Since we’ve done it, the top-four teams have won every time except once,” McLachlan said this week.

“The fact that a team could win outside the top four, if that’s what is generated, that’s a good thing.

“I know that it’s still better to finish top four than bottom four.

“The only argument I can hear … is maybe the concept of the advantage of being a top-four team is less than what it was.

“But if it means that one team can get up in that period and win, I think it’s a good thing.”