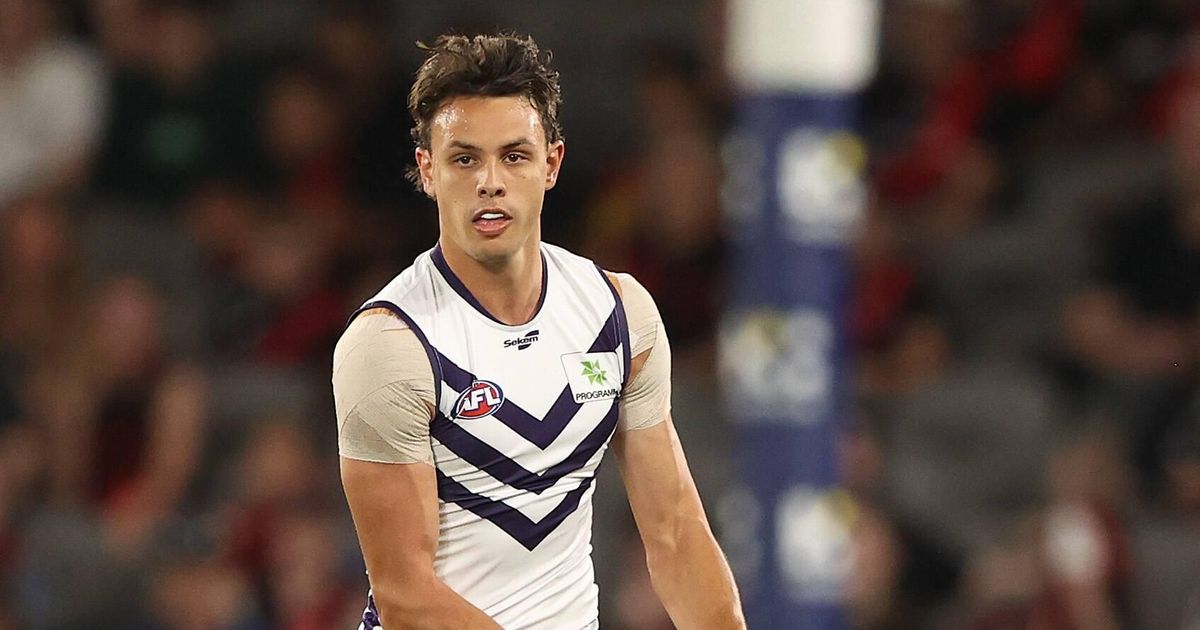 FOUR more Fremantle players will be unavailable for selection this week as they enter the League’s health and safety protocols.

The Dockers confirmed on Wednesday night that Heath Chapman, Hayden Young, Liam Henry and Matthew Johnson had joined Connor Blakely in the protocols.

Freo will also be without assistant coaches Josh Carr and Matthew Boyd for Saturday’s clash against Carlton, with both in HS protocols.

Coach Justin Longmuir will be forced to make at least two changes ahead of the Blues game, with Young and Chapman to come out of the side that thrashed Essendon on Sunday.

Henry and Blakely played in the WAFL for Peel on Friday, while Johnson is already recovering from an ankle injury.

Luke Ryan and Michael Frederick were absent from team training on Wednesday, as the club seeks to handle rising COVID cases in the WAFL.

“We’ve had to separate the playing group. There’s only 23 players training today, which is mainly based on the WAFL situation,” Longmuir said on Wednesday.

“A lot of our players played at Peel on the weekend, so we need to mitigate that risk, so we’ve split our playing group up.

“We’ll probably have to do that for the foreseeable future. It’s not the ideal situation for the camaraderie.”

Longmuir insists there’s a lot to like about Michael Walters’ 2022 form despite the star forward managing only two goals in five games.

The Dockers are flying with a 4-1 record after three straight wins to sit second on the ladder, but Walters’ output has been a down point among their impressive start to the year.

The 2019 All-Australian has largely been deployed forward but is averaging only 13.4 disposals per game, his lowest since 2014. The club’s five-time leading goalkicker’s biggest struggle has been in front of goal, appearing bereft of confidence from set shots in Sunday’s win over Essendon.

Walters, who kicked 40 goals in his All-Australian season three years ago, has managed only 2.6 this season and seemed eager to pass off opportunities against the Bombers.

The 31-year-old spent time working on his goalkicking away from the main group at Tuesday training and was joined by Longmuir. The Freo coach insisted on Wednesday that Walters was playing well but needed to re-gain the confidence to finish off his good work.

“It’s not just his effort, I’ve been impressed with all of his game except the bit he usually does really, really well and that’s finishing off in front of goal,” Longmuir said.

“What can happen sometimes is players shift their focus to the finishing part and they forget what’s actually getting them the shots.

“My message is to reaffirm he’s doing a lot right and remember what’s important in his role, to keep working on his finishing and that will come. You can’t lose sight of his impressive contest, pressure, running patterns and ability to find the footy, all that stuff is in good order. I reaffirmed that with him.

IN THE MIX Who’s in the frame for R6 selection?

“He’s still a concern to the opposition. It’s part of the message I’m selling to him. He’s leading really well, he’s communicating and organizing us really well in the forward line. He’s doing a lot right.”

Longmuir has a more welcome headache in attack this week, with recent Glendinning-Allan medalist Lachie Schultz out of health and safety protocols and likely to be available for selection.

“We’ll have to work through it,” Longmuir said about selection for Saturday night’s home game with 4-1 Carlton. “I think ‘Shoota’ (Schultz) is in our best 22, but we’re happy with the way ‘Banners’ (Banfield) went about it on the weekend.

“Four scoring shots, played his role really well. We’ll just have to weigh that up.”