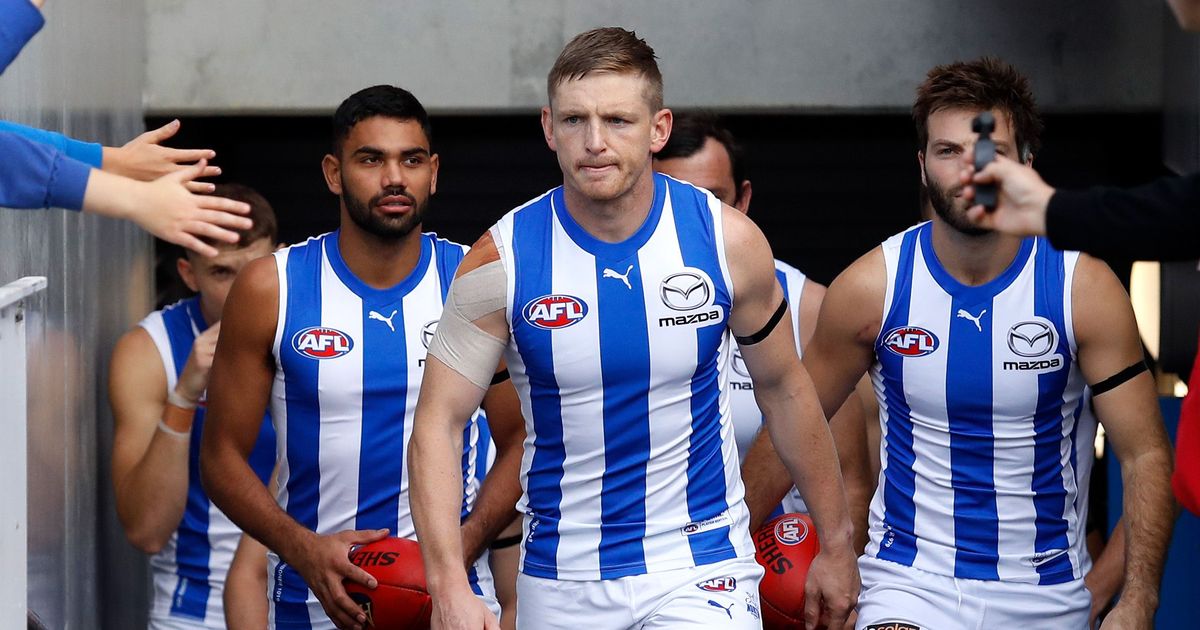 NORTH Melbourne great Wayne Carey has weighed in on the club’s crisis, saying the Kangaroos are “broken” and not being honest with themselves.

His comments come as chief executive Ben Amarfio moved to calm the waters around the embattled club, adamant the Kangaroos are united from top to bottom.

Captain Jack Ziebell’s 250-game milestone will come at the end of another torrid week at North Melbourne, which is wallowing at second-last on the ladder with only one win from 10 games.

Three of their recruiting staff have left a week out from the mid-season draft, plunging the struggling Kangaroos into fresh crisis.

Also, their No.1 draft pick Jason Horne-Francis, who has put off contract talks until season’s end, was spoken to for taking an interstate trip without North’s knowledge.

Horne-Francis flew to Adelaide for Mother’s Day after their round eight loss to Fremantle and, after a succession of flights in a short period, he missed round nine with hamstring tightness.

Carey, who captained North’s most recent premiership teams in 1996 and ’99, expressed his concerns about their plight on Wednesday.

“This is as low as this football club has been since I’ve known it,” the commentator told Triple M.

“I don’t think they are being completely honest with themselves because you can’t improve until you actually acknowledge that we are broken.

“There is too much going on. You don’t have people just resigning for no reason.”

North Melbourne has not made the finals since 2016 and second-year coach David Noble, the club’s third mentor in four years, had to defend himself earlier this month after news broke of a post-game spray he gave his players.

“It’s never great to be in the media for the wrong reasons and there’s a lot of gossip that’s being peddled, a lot of innuendo that gets peddled, which is disappointing,” Amarfio said in a Kangaroos member Q&A recording on Wednesday.

“We know where we’re at inside the club. We’re united, we’re tight. The players are happy, the staff’s happy. The board is united behind us and we’re backing management, we’re backing our coach.

“So that (innuendo) is really disappointing and that affects us all but as a team, we’re sticking together and we’ve got our eyes firmly set on the long term.”

Amarfio stressed the club had been prepared for a difficult rebuilding process.

“We went into this knowing it was going to be tough and it is tough,” he said.

“Would we like the (losing) margins to be less? Of course we would. But nothing we’re seeing isn’t anything that we expected.

“Rebuilds are slow. They take time and you can’t speed it up. We’d love the universe to move more quickly but you can’t hurry peoples’ development.

“We’re trying to do it the right way and the way that successful teams have done it in the past, we’re replicating that.

“Obviously we’d love to re-sign Jason at the right time,” he said.

“He’s a terrific young player and a great acquisition to our footy club.

“He seems extremely happy at the club, he’s got good mates. He’s getting educated really well and he’s playing some terrific footy.”