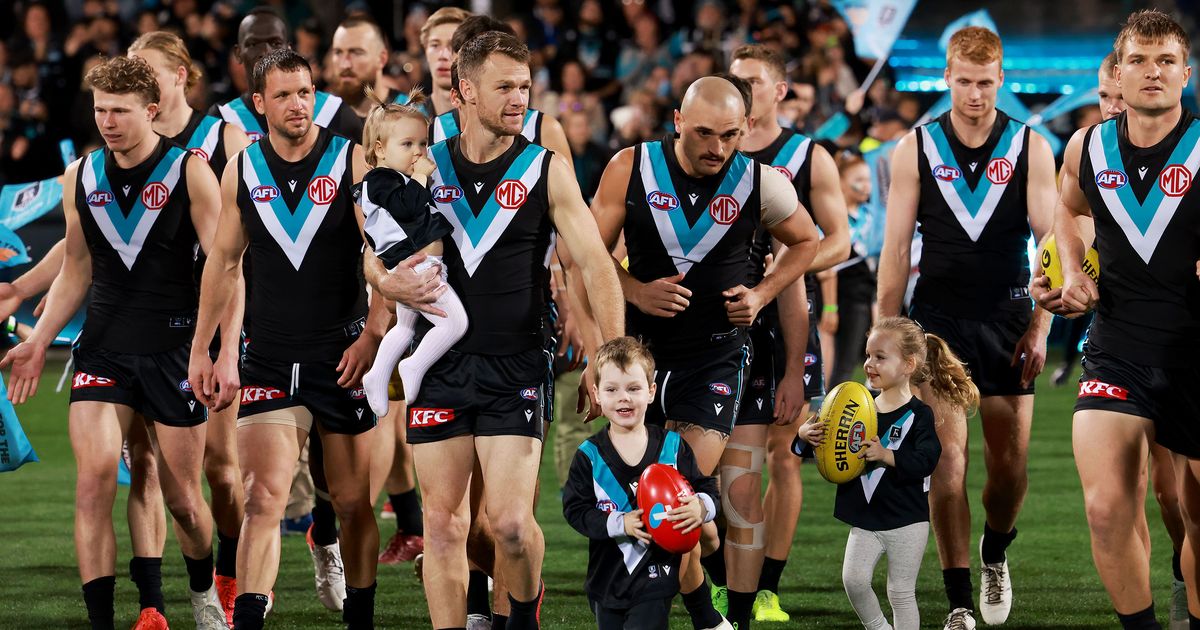 THE EMOTION of Robbie Gray’s retirement and Port Adelaide’s desperation to send the champion off with a win had coach Ken Hinkley worried that his team could fall short in Saturday night’s Showdown.

The Power had an all-of-club focus on winning the final game of the season to pay tribute to their three-time club champion, with Hinkley using it to motivate his players in a game with no finals implications.

The team ultimately delivered and Gray was able to bow out a winner in his 271st game after the floodgates opened in the second half and Port cruised to a 56-point win in front of more than 50,000 fans.

It was a special night for Gray, but Hinkley admitted he had feared the club might have fallen short under the pressure it put on itself.

“I wanted this really, really badly, and his teammates, the club and everyone who’s been involved just wanted it so badly,” Hinkley said after the game.

“Sometimes when you have that desperation you can not play at your absolute best, so it was a credit to the boys, led by Tom (Jonas) and Ollie (Wines). They played really strong footy tonight.”

Hinkley said he had found Gray’s retirement “particularly hard” this week and he hadn’t enjoyed saying goodbye to the player he considers to be Port Adelaide’s finest of the AFL era.

“I know goodbye is not forever, but from a footballer point of view it’s really bloody hard,” the coach said.

“He’s just done so much for me for 10 years. He’s given me more back than I’ve given him.

“I’ve got his tag in my pocket because I’m not letting it go. He’s staying with me … you can’t let go of people like Robbie. It was an emotional week.”

Gray said Showdown 52 was a nice way to finish, winning comfortably on the back of a powerful midfield performance led by Connor Rozee (34 disposals and 11 inside 50s), Ollie Wines (34 and eight clearances) and Zak Butters (26 and nine clearances).

He said the emotion of the occasion finally got to him in the final moments of the game, spilling over after the siren when he hugged long-time teammate and close friend Travis Boak.

“I knew there was 15-30 seconds to go, and I was down in the goalsquare and had the cheer squad and the fans behind me,” the four-time All-Australian said.

“It got to me a little bit and the first bloke I saw was Trav.

“It was a nice game to finish on. The crowd was enormous, it’s been a big week and I feel really grateful for all the support and the love this week.

“For the boys to go out and perform like we did, it was a special night.”

Gray, who paid tribute to the support he had received from Hinkley, said he had considered a long shot for goal late, but knew his only chance would be with a torpedo, eventually deciding to pass up the moment and kicking inside 50 to Todd Marshall.

He flagged an intention to now move into recruiting or list management after taking some time to discuss his next step with family, with Hinkley insisting there was a role for him with the Power if he wanted it.

Adelaide coach Matthew Nicks was left admiring the way his opponents sent Gray off after the Power slammed on 11 goals to three in the second half.

The Crows trailed by just seven at the main break, but Nicks conceded Port were far cleaner in the second half and too strong.

“We felt like there was a style of footy we needed to play and we got a half of that,” he said.

“We came in at half-time and we felt like if this game plays out the way it is then we’re a big chance.

“It turned to their game in the second half and they’re a very good side. Unfortunately, we weren’t able to stop that … it was a disappointing finish to the year for us.”

Nicks said the season was one that saw his team develop, and the 22 games of experience into his young players would prove valuable.

He conceded the Crows had “lacked polish” on Saturday night but said the team had otherwise finished the season strongly in that area and he remained “extremely optimistic” about the future.

“We feel we’re heading in the right direction and we’re playing that brand of footy that will get us there,” he said.

“There are always areas you’ve got to clean up when you’re not playing finals footy. We’ll go away and work on those.”