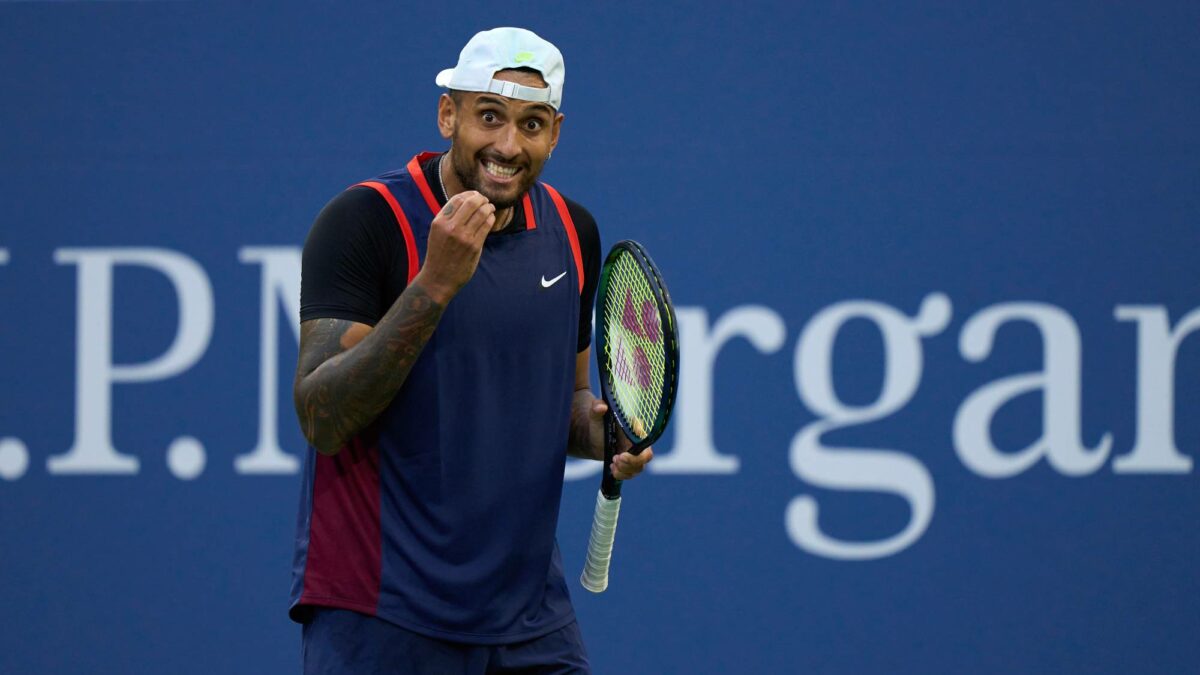 Intent on defying his detractors, Nick Kyrgios readily admits he’ll carry a siege mentality into his US Open fourth-round joust with world No.1 and defending champion Daniil Medvedev.

Proving his charge to the Wimbledon final was anything but a flash in the pan, Kyrgios has already exceeded his best-ever run in New York.

But the most polarising figure in tennis craves more and concedes the haters are driving his latest inspired grand slam title tilt.

“As a tennis player, as an athlete, with any profession, you kind of want to be in those moments. Like, I don’t want to be playing futures or challengers on back courts with no crowd,” the showman said.

“That’s where I want to be. That is why I work hard. It makes it even sweeter.

“(But) I’m the only Australian still left on the men’s side. It’s the same story every time, literally every time in a grand slam.

“I always thrive on it. I never want to forget all the things people say. I always carry this chip on my shoulder. I have it all in the back of my head when I’m playing.”

Aside from this US Open campaign and Wimbledon, Alex de Minaur has in fact been Australia’s last man standing at many slams in recent seasons.

Still, whatever works for Kyrgios, who has the opportunity to usurp de Minaur as Australian No.1 with another victory over Medvedev on Sunday night (9am Monday AEST).

The 27-year-old can also bump the Russian off his world No.1 perch, with Rafael Nadal poised to return to the top of the rankings if Medvedev loses to Kyrgios.

Kyrgios says he lives for opportunities like this, playing for such high stakes at Arthur Ashe Stadium.

“Win or lose, I’m proud of how far I’ve come. I’ve worked hard to be in the fourth round at the US Open, against Medvedev. I want to be there.

“I think that’s where every tennis player wants to be, playing the best players in the world in the best stadiums in the world, getting paid well. I’m looking forward to it.”

The Canberran holds a 3-1 lead in the pair’s career series, his only defeat a four-set loss at this year’s Australian Open and his most recent win over Medvedev coming three weeks ago in Montreal.

The winner will face either Spanish 12th seed Pablo Carreno Busta or Russian Karen Khachanov on Tuesday for a semi-final berth.

Kyrgios also remains in the hunt for a second grand slam doubles crown for the year with Thanasi Kokkinakis after the Australian Open champions advanced ominously to round three on Saturday.

Australian women’s No.1 Ajla Tomljanovic is also vying for a quarter-final spot, taking on Russian Liudmila Samsonova in the women’s fourth round on Sunday.

Rafael Nadal has defeated Richard Gasquet for the 18th consecutive time to move through to the fourth round at the US Open in New York.

The former junior rivals first played at tour level back in 2004 and Nadal has won every encounter since.

After being dealt a blow on the nose with his own racket in his second-round victory over Fabio Fognini, Nadal avoided any such mishaps this time.

“It’s a little bit bigger than usual but it’s OK, the nose is still there.,” he said with a smile.

“Three matches already, I increased a little bit the level today so that’s important for me I think. I’m happy for that against a very good friend like Richard. I need to keep playing better and better to have chances to go through.”

Nadal has won four of his 22 grand slam titles at Flushing Meadows, most recently in 2019 and the last time he entered the hard-court tournament.

Nadal, who won his 30th night match at Arthur Ashe Stadium, has won 34 straight sets against Gasquet and will play Frances Tiafoe next after the 22nd-seeded American defeated 14th seed Diego Schwarzman of Argentina 7-6 (9-7) 6-4 6-4.

World No.4 Carlos Alcaraz swept aside another local in Jenson Brooksby 6-3 6-3 6-3 inside Arthur Ashe Stadium.

The Spanish teen rocketed to stardom as the youngest man to reach the quarter-final at Flushing Meadows last year and looks on track for another memorable run.

“I played really, really well,” the 19-year-old said in an on-court interview.

“I knew that it was going to be a tough match… I’m really happy with my performance.”

The third seed has enjoyed a terrific 2022, winning in Miami and Barcelona before downing a fearsome trio of Nadal, Novak Djokovic and Alexander Zverev to triumph in Madrid.

The Dane has a reputation as a spiky character and during the second set he protested to the umpire about Norrie catching his ball toss before serving.

Players are allowed 25 seconds between points but the clock stops when the server throws up the ball, meaning catching the toss buys extra time to reset.

Rune implied to the umpire he thought Norrie was deliberately exploiting a loophole in the rules.

“It’s a bit annoying. I’m not controlling the rules but I think you can do it a couple of times but doing it 10, 15 times is maybe too much,” said the teenager.

AUSSIES IN ACTION ON DAY EIGHT OF THE US OPEN (PREFIX DENOTES SEEDING):