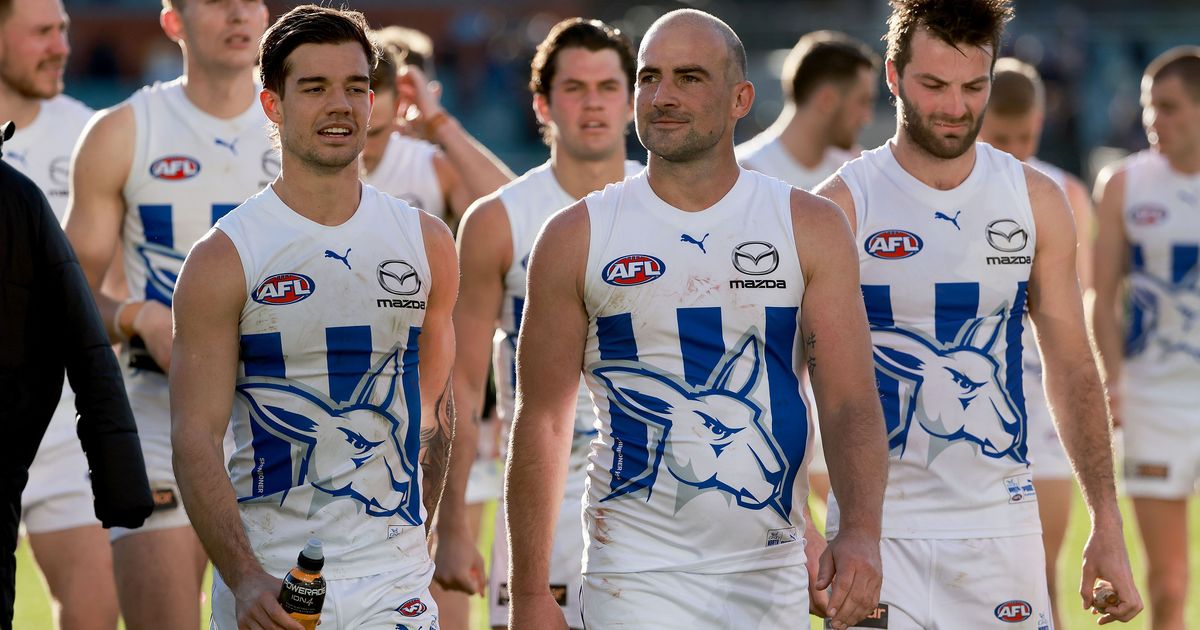 LEIGH Adams will have a simple message for North Melbourne’s next coach as he prepares to hand over the keys: “You’ve got some nice wheels there”.

The Kangaroos have reportedly offered four-time Hawthorn premiership coach Alastair Clarkson a long-term deal to take over at the helm.

North fell to a 19th loss in 21 games this year with a 29-point defeat to the Crows at Adelaide Oval on Saturday.

But, as he prepares to hand over the keys, interim coach Adams was asked what he would tell the club’s next boss.

“I’m going to say, ‘You’ve got some nice wheels there, you probably just need to add a few spare parts to it’,” he told a press conference.

There were suggestions Clarkson was in attendance in Adelaide to watch as the Kangaroos fell short, with Luke Davies-Uniacke (37 disposals, 11 clearances a goal) starring and Ben Cunnington making an inspirational return at AFL level.

Adams was unsure if the coaching great was present, but he is confident North has plenty of talent on its list.

“I can’t confirm or deny cos’ I didn’t see him. But hopefully if he was he’ll be really happy with what he saw,” he said.

Adams had no regrets about the decision to drop Jason Horne-Francis for the trip to Adelaide and was happy to see the No.1 pick respond in the VFL with his 29 disposals and nine clearances.

All eyes were on Cunnington, who had 17 disposals in his first AFL game since round 19, 2021, after recovering from testicular cancer.

“I thought early he was really good. Obviously we knew at some stage he was probably going to blow up a little bit with his conditioning, but the emotional lift it gave our group at this time of year is fantastic,” Adams said.

“We thought he was able to impact the game. He had a tear in his eye when he put his jumper back on today and I think for our young blokes to see what it means to play for this footy club, hopefully it has a lasting impression on this group.

“We don’t want to just give games out to players, we want players to earn games and for someone to have 12 months of his footy career taken away, to see how much it means to him to get back out there, hopefully that’s a lasting memory for a few of our young guys.”

Darcy Fogarty helped the Crows to their win, booting four goals for the second straight week to take his tally to 30 for the season.

Adelaide coach Matthew Nicks said Fogarty’s growth was down to belief, confidence and improved connection with his teammates.

“Belief in himself, confidence as you mentioned, he’s got his teammates now that know what he does well so there’s this connection there and a belief in each other,” he said.

“I’m not saying it wasn’t there before but it comes from playing footy together for longer. When you’re kicking the ball to someone regularly there’s a connection and so that’s building as well.

“So not only is Fog’s confidence in himself there but all his teammates at the moment are just backing him in – just put the ball in an area where we know he’s got some weapons and he gets the job done, but a lot of work has gone into that, a lot of work, and reward is now coming which is well deserved.”