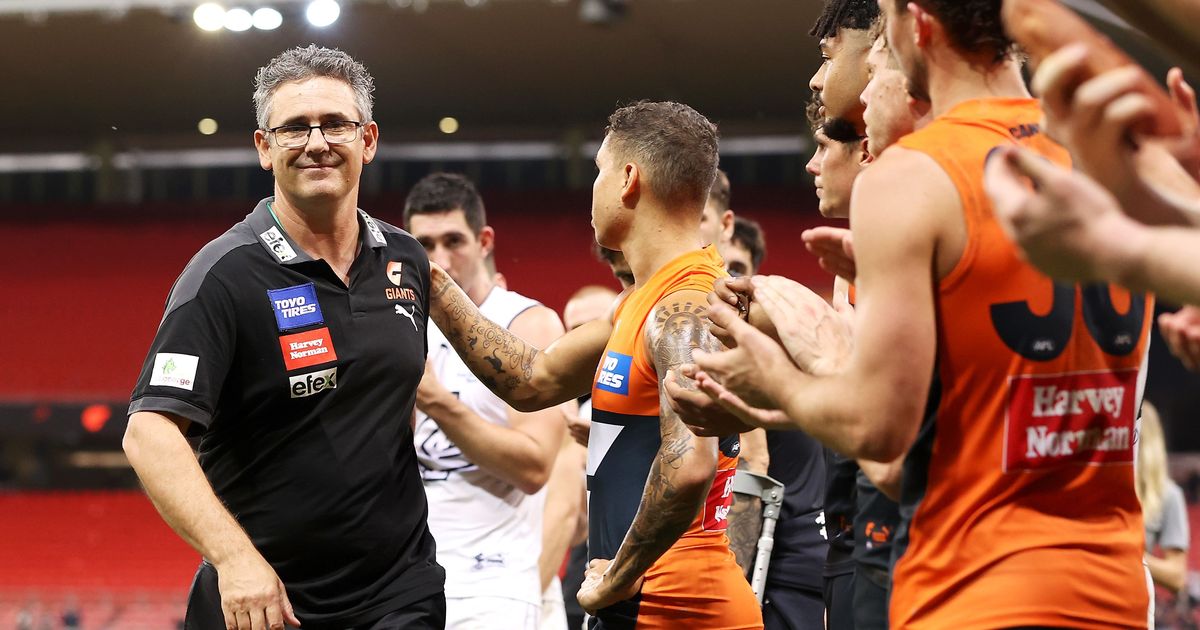 OUTGOING Greater Western Sydney coach Leon Cameron is confident the Giants will “come out the other end”.

GWS has had a horror 2022 campaign, winning just two of its nine games, and after Sunday’s 30-point loss to Carlton at Giants Stadium, the club sits 15th on the ladder.

Cameron admitted it was yet another poor performance, but believes these tough times will benefit the club hugely in the long run.

“You can ramble on about it… I can see it in their eyes, but I just said ‘don’t be despondent’.

“Clearly the club’s had a couple of losses that we’re not proud of, but that’s what builds footy clubs; we’ve been through tougher times before.

“So, they’ll come out the other end, they’ll be fine.”

Cameron conceded he was feeling mixed emotions following his 193rd and final game at the helm of the club.

“There’s a disappointment because of the way we finished today. There’s disappointment with where we sit on the ladder, and ultimately the responsibility of that is with the senior coach. We’re 2-7 and that’s not us, we haven’t been there for a long time. That hangs over your head a bit, which is part of coaching,” he added.

“On the other side of it, I said to the players before the game we’ve built some great relationships and friendships; that’s always good, that’s fantastic and it’s part of life.

“You sort of flick in and out of that, hour to hour and day to day.”

Cameron added that the emotions of the day may have impacted his side’s performance.

“Whether sometimes emotions go over the top and you make silly decisions, you’re trying too hard… I think there was a bit of that today, and that’s not a true reflection of our group.”

Mark McVeigh will now take charge of the team until the end of the year, and Cameron is excited by watching as a spectator.

“I’m really confident, under Mark’s tutelage for the remainder of the year, that there’ll be a number of opportunities for kids and players to stamp their authority as a Giants player,” Cameron said.

“Looking from afar, that will be exciting.”

The 49-year-old admitted he is uncertain about what his future holds.

“There’ll be time to reflect, but equally, you have a bit of a spell and you poke your head up and see what’s next,” he said.

“I love coaching, I don’t know what that leads to. I love the environment.

“As I said before, if you’re 99 percent (invested), then you’re one per cent off. Right now, I’m probably 99 per cent, and you can’t chance that one per cent.”

Carlton coach Michael Voss, meanwhile, was full of praise for his side after the 30-point victory.

With the clash being Cameron’s last as coach of the Giants, the Blues knew the home team would be desperate to send him off in style.

Carlton’s task was made all the more difficult earlier in the week when they lost focal point Harry McKay to a knee injury and key defender Lewis Young to Health and Safety Protocols, while defender Zac Williams was subbed out of the game before quarter-time after hurting his lower left leg.

Having led by as much as 27 points in the first quarter, the Giants clawed their way back to trail by just 12 at quarter-time, and scores were tied at the main break.

Carlton took a six-point edge in the final term and the game was well and truly up for grabs.

“That was a significant win for us,” Voss said post-game.

“I’m sure they would have been really, really keen to send him out on the right note… so, when you sort of put that… and, we lost some personnel during the week and we’ve had a couple of weeks where we just haven’t been able to have a lot of luck in that area.

“It makes it really significant when you put that story together.

“I’m really proud of the club, because you have to just get on with business, really and focus on what you can control and what you can influence. The way we played tonight was a real step forward for us.”

The Blues are a game clear in fourth on the ladder, ahead of a round 10 clash against Sydney at Marvel Stadium on Friday night.