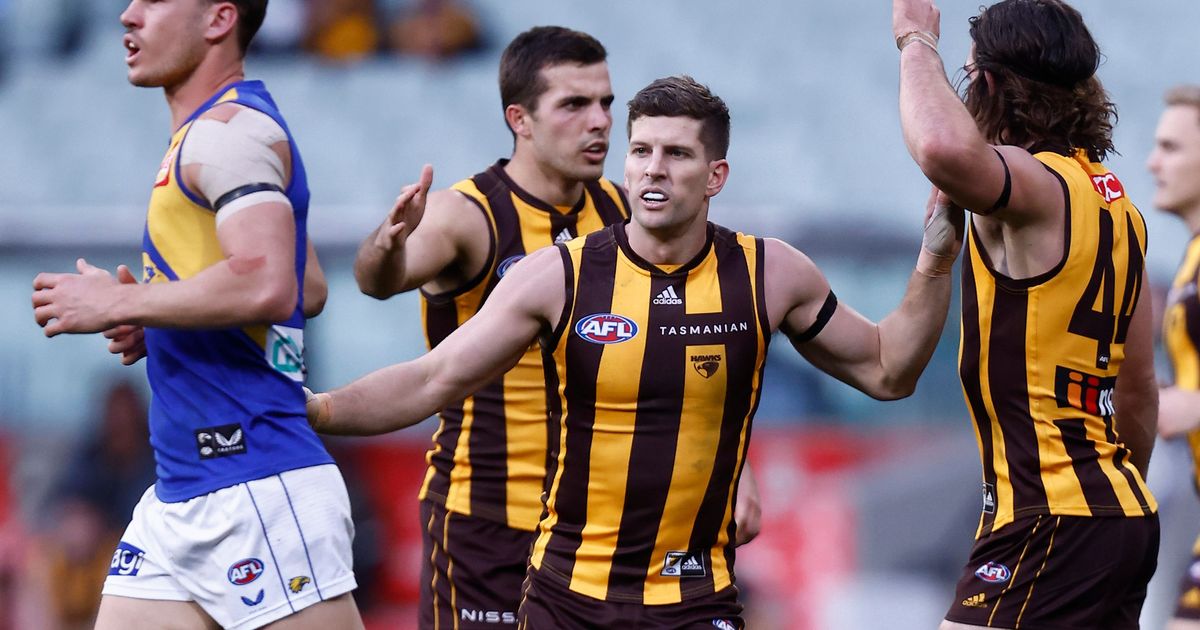 HAWTHORN continued its rebuild under Sam Mitchell with a commanding 25-point win against West Coast at the MCG on Sunday.

Experienced mid-sized forward Luke Breust showed the way with an equal career-best six goals, the last one late in the last quarter to ice the game after the brave but undermanned Eagles kept pressing throughout the contest.

Breust’s goals haul was timely as young key forward Mitch Lewis was kept goalless by Eagles defender Tom Barrass, who had a career-high 30 possessions including 18 marks.

The Hawks maintained scoreboard control following a seven-goal second quarter, but the home team had to respond several times as West Coast found answering goals to stay in touch.

And their trademark rebounds from defence delivered several goals on the way to an impressive win.

Hawthorn was given an early reminder of the danger posed by West Coast’s key forward targets as Jack Darling marked and goaled inside the first minute.

Josh Kennedy added another with a quick kick off the ground in the goalsquare, but both Eagles big men could manage only two each against Hawks new boy James Blanck and the reliable James Sicily.

A heavy downpour just before the game presented players with a wet, greasy ball, and while the opening quarter was an even slog, handling became easier when the sun reappeared.

It was the Hawks who grabbed the initiative after a stern pep talk from skipper Ben McEvoy at the quarter-time break.

Hawthorn’s bold rebounds down the centre corridor put the Eagles’ defence under pressure, and Breust, Will Day, Dylan Moore and Connor Macdonald kicked unanswered goals to provide a scoreboard buffer.

But West Coast proved more than a match in the contested-ball battles, and late goals from Jake Waterman and Liam Ryan kept the visitor in touch to set up an engrossing second half before Hawthorn finally asserted control.

Another Hawk soars as teenage midfielder shines
Pick No.7 in the 2021 NAB AFL Draft, Josh Ward delivered his best AFL game yet in what has been a promising first season. The midfielder finished with a game-high, and career best, 34 disposals, including six clearances. Ward also had eight score involvements – the third most on the ground – as he continues to show he is set to be a star of the future.

Brilliant Barrass shines for Eagles
Tom Barrass was superb for West Coast, with numerous courageous defensive efforts keeping the Eagles within touching distance. The 2018 premiership player had 30 touches, 18 marks and 11 intercepts, while he spent plenty of time on one of the competition’s in-form forwards – Mitch Lewis, who was held goalless.

Culley battles hard on debut
The top pick in this year’s NAB AFL Mid-Season Rookie Draft, Jai Culley made his debut at the MCG on Sunday. The midfielder worked hard and finished with 12 disposals, including an equal game-high seven clearances. No player had more tackles than Culley’s 11 and he showed enough to at least warrant more chances at AFL level.