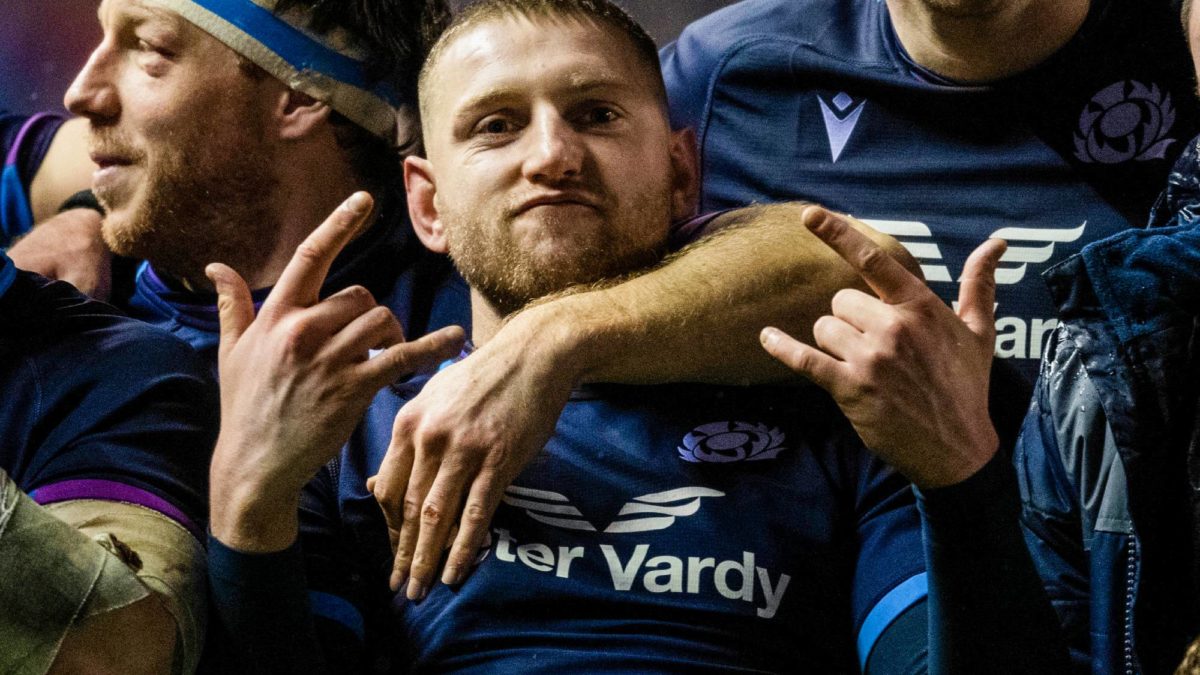 It was just another weekend in the Six Nations – one full of bellowing tribalism and nerve-shredding theatre. No more so than in Edinburgh, where Scotland overturned a seven-point deficit in the final quarter to win by a nose in a photo finish, 20-17.

It was ex-England hooker Brian Moore’s last match as a summariser for the BBC, after two decades in which he played the bad cop to Eddie Butler’s good cop in the commentary booth for Six Nations tournaments.

Still in character as the final whistle approached, he appropriately exited stage right with one final ‘boo-hiss’ moment of sheer pantomime: “I have just got two words to leave you with.” The collective intake of breath at the Beeb was audible before ‘Mooro’ broke wind for the last time with a polite, anti-climactic: “Thank you.”

Moore would have been fully entitled to a far more agricultural outburst after England contrived to throw away a handy seven-point lead at the hour mark in the Murrayfield rain, only to lose by three at the end. The men in white were in the driving seat, having forced Scotland to make the majority of the tackles, and therefore concede most of the penalties awarded by Kiwi referee Ben O’Keefe during the match.

As it was, Scotland continue to enjoy an era of unparalleled success against Eddie’s England. The victory represented back-to-back Calcutta Cup wins – the first time since 1984 – and the fifth occasion in the last six games where Eddie Jones has failed to come up with a winning formula against Gregor Townsend’s charges.

The key moment arrived in the 66th minute:

It is a superb double cross-kick sequence from a right-hand scrum by the estimable Finn Russell – firstly a kick over to the left to enable a clean break by Duhan van der Merwe, then one back to the opposite side to find the England hooker Luke Cowan-Dickie mismatched against the elusive Tartan right wing Darcy Graham.

How did that happen? The secret is that Russell is able to go wide-to-wide in only two phases, and that gives the England defence no time to regroup after the initial break is made.

Backfield defenders have to work exceptionally hard from scrum starters where the opponent is able to move the ball wide effectively on the first phase:

As Russell drops the first punt unerringly into van der Merwe’s bread-basket, England left wing Joe Marchant is being pulled across into a central full-back role. After the big South African-born wing beats the first tackle, he has to shift even further over to the right:

When Russell prepares to put boot to ball for the second time in two phases, Marchant has been drawn into defending the wrong side of the field. So, who can be England’s widest defender marking Darcy Graham? It is their none other than their hooker, with his head still spinning from the preceding scrum contest!

The final chapter of the story is an eloquent answer to those who still believe that an intentional knock-on should not incur the most severe sanctions that rugby law has to offer:

Cowan-Dickie palms the ball away, goalkeeper-like into touch, with no intention of catching the ball. Without his interference, Graham scores a try. Referee Ben O’Keefe was spot on: penalty try, with a yellow card issued to the Exeter rake.

In his comments after the match, Eddie Jones threatened Rassie-like reprisals:

“I’m just preparing a video mate, so you’ll have to wait for it. Wait for the video mate — we’ve got the production team on it now. It’s called “Rassie-in-Love-With”. That’s my production team, so I’m getting it ready mate.”

We can only hope that he has his tongue as firmly in his cheek as Brian Moore when he bowed out of Six Nations commentary.

Over in Dublin, ex-Brumby Mack Hansen’s star continues to rise as the media shadow overhanging Eddie Jones thickens to blackout point. Maybe he should now be re-christened ‘Mack the Knife’, after the way in which he cut Wales to pieces at the Aviva stadium.

Both Hansen and Ireland made a big statement from the opening set-piece of the match, with the wingman brushing away his opposite number, British & Irish Lions wing Louis Rees-Zammit, on a long run down the left from a scrum just outside the Ireland 22:

Only a couple of minutes later, promise was converted into reward:

The attacking theme is similar to Scotland’s in the Calcutta Cup game, but the means are very different. Instead of kicking, Ireland employ three forward drives from lineout to draw the Welsh full-back Liam Williams over to the open-side of the field. They had worked out that the combination of number 10 Johnny Sexton, number 15 Hugo Keenan and Mack Hansen (in the white hat) will outweigh Williams’ attempts to get back to support Rees-Zammit on the other side of the field:

The three Irishmen will just get to the target area quicker, and in greater numbers than Wales.

The use of Mack Hansen’s number 10 skill-set, particularly on attacking left-to-right movements, was a joy to behold – at least for supporters donning the emerald green:

In the first example, Hansen is inserted at first receiver from a lineout in order to bring Bundee Aki on to the ball, then re-ruck effectively over the top of him and draw the penalty. In the second, he makes the critical extra man, ghosting into the line off Sexton’s shoulder to link with Aki and create space for Garry Ringrose in the 13 channel.

It was not the only occasion that Hansen’s presence made a key difference on attack moving towards the right touch-line:

With his additional value as a passer with number 10 quality, Hansen can get the ball away in the tackle of Liam Williams and help stretch the Wales defence to the right corner of the field. On the very next play, Ireland were able to exploit the extra work demanded of the Welsh forwards in defence:

The third try of the game for the men in green followed in short order after Josh van der Flier’s bust up the middle.

Hansen’s work rate in defence was just as impressive. Here he is, making a try-saving tackle on Johnny McNicholl on the right:

A couple of phases later, he is already back in his natural spot on the wide left, and ensuring Wales do not have any advantage to that side:

On the day, there was only one winner in the individual match-up between the Australian-born Brumby and the British & Irish Lion in direct opposition to him.

Louis Rees-Zammit’s six runs for 23 metres, with one break and no defenders beaten, paled in comparison to Mack Hansen’s 10 for a match-leading 105 metres, with two breaks and three defenders beaten. Hansen shut the Welshman down comprehensively on defence, just for good measure. No wonder he earned the man-of the match award on debut for his adopted homeland, Ireland.

Summary
As one Australian’s star rises in the Northern Hemisphere, so another’s is beginning to wane. The media pressure on Eddie Jones’ position as head coach of England will only continue to grow if another Six Nations campaign has a negative outcome.

He has Italy away and Wales at Twickenham to look forward to over the next couple of rounds, so England should enter the final stages of the competition in the black. It is the last two matches, versus Ireland and France, which will tell the tale of the tape and decide whether England’s 2022 tournament has been a success or a failure. They may even influence whether Eddie Jones stays on as coach until next year’s World Cup.

No such problems in Ireland, where Mack Hansen’s meteoric rise gained further momentum in the ‘Leinster Plus’ system favoured by Andy Farrell and co. Hansen had a stormer on debut, winning the man-of-the-match award, making the most metres and clean breaks, and prompting his coach to comment:

“We’re not surprised – he’s got the temperament for handling debuts.

“He’s very cool, calm and collected in how he plays the game and it suits how we play as well.”

Mack Hansen and the way Ireland want to play the game fit together like hand and glove, and he ended up looking more like a seasoned veteran than what he is – a rookie. The nagging question is: could he be doing just as good a job for the Brumbies and the Wallabies, had he remained at home?