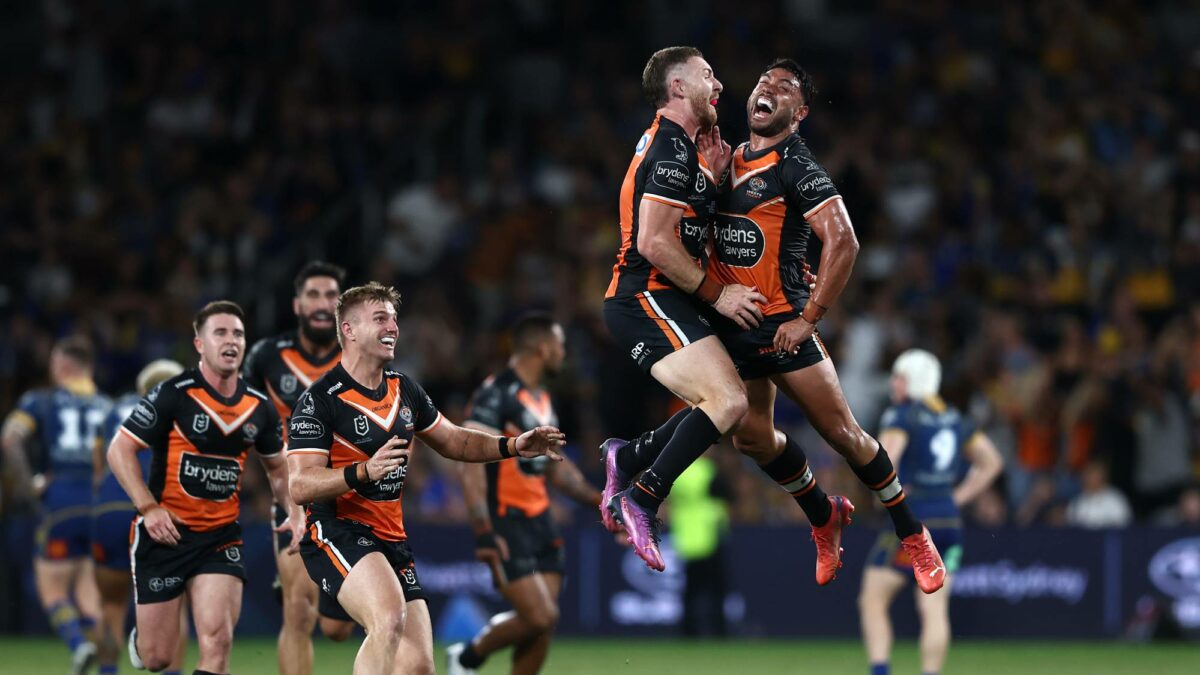 Jackson Hastings has kicked a field goal after the siren to hand the Wests Tigers their first win of the season in the most dramatic fashion possible.

The Tigers fought valiantly and so nearly blew it, but Hastings produced the clutch play to win the game 21-20.

Hastings had been the star throughout, taking the No.7 jersey from Luke Brooks and leading the Tigers from the front.

“It hasn’t gone our way at times,” sid Michael Maguire. “We’ve been close at times and a bit of confidence and belief in those games tip you to winning it.

“We’ve had a tinker with the team this week and someone like Jacko adds to what Brooksy is doing. I thought Brooks was strong out there with the players along with Jacko.”

It was hard to remember that the Tigers were 0-6 and went into this game with the bookies’ line at +20.5, a reflection of the media environment that had largely written off their chances.

“We don’t pay attention,” said Maguire. “I don’t watch it. We know what we’re building here. Our team showed what they’re capable of, and to come down to the wire and have one roll our way, we get confidence off the back of that.

“But we also know that we’ve got to roll back up in five days’ time and do it all again.”

He paid tribute to Hastings, who announced his return to the NRL after several years in the Super League, and to the much-maligned Brooks.

“He’s had a fair journey,” said Maguire of Hastings. “He’s matured. To be able to come up with the big moments like that and achieve, it’s nice for him.

“Those are the things that you want your players to stand up and take. Seeing the players out there on the field together, we have to take the confidence off the back of that.

“Brooks has been bashed and everyone puts a lot of focus on the number 7, but they play a dual role anyway. Sometimes Jacko might take charge but Brooksy is doing exactly the same.

“I felt that it was the right time for Brooks to have that chatter taken away from him. We all know what he’s capable of and he showed that today in how he goes about his game. The team got behind him, and it’s a team game.”

This was a bruising, draining contest in which the Tigers were never behind. From the first play, it was clear that they were going to be a lot more difficult a proposition than the Eels perhaps expected.

Parramatta dominated in territory and ball, but their completion rates were terrible and seemed to be trying to score off every play at times. It was as if they thought they could just turn up, throw the ball around and score.

When they focused on setting up play, they found success, but did so too infrequently. The Tigers, on the other hand, kept their completions high and tackled everything that moved.

“Our concentration around the detail wasn’t good enough,” said Brad Arthur. “When you’re completing like that it’s a reflection of the style of footy that you want to play.

“I expected to play with detail. We lacked patience, we made a few line breaks and were trying to score off every play.

“The games where we play our best footy are the games that we build, where we’re prepared to be patient, kick long and defend well. Our attack comes off the back of that.

“When you complete that low and you’re not prepared to build pressure, that’s a lack of respect for ourselves and the opposition.”

The trend was set early on. Parramatta forced dropouts in the first five minutes, as the pressure piled on.

Wests were already hanging in there, but Will Penisini dropped it and the Tigers collectively breathed. The waves continued, but the Tigers kept scrambling and when they got into the Eels end, Luciano Leilua got over for the unlikeliest of leads.

The Tigers cannot help up commit harakiri, however. They’d already given away two relieving penalties to provide Parramatta with field position. They wouldn’t survive a third.

Mitchell Moses, hands all over the ball for the Eels, was the creator. On the last, he spotted the markers missing and jumped out, before sliding a kick that Clint Gutherson touched down behind the black dot. It was the eighth try assist from a kick that Moses has managed in just six rounds.

Parra’s completion rate was a problem – dipping below 60% – but they were playing a high risk brand of footy that was far from clinical.

Not the Tigers. They had been in Parramatta territory twice, and twice they had scored. The next over was David Nofoaluma, who benefitted from excellent work his opposite winger, Starford Toa, to get Wests into field position.

You could make that three from three. Jackson Hastings had been excellent and he was the star, dinking a kick over Penisini for another Nofoaluma putdown.

Whenever Parramatta got the ball, however, the Tigers immediately went into survival mode. The relieving penalties and set restarts were mounting as part of a clear policy of trying to slow the ruck, but referee Chris Butler was alert to it.

Isiah Papali’i crashed over from short range after a prolonged period pressure, and as Moses lined up the kick, Butler read the riot act to Brooks.

The Tigers would hang in there, and take a 14-10 lead to the sheds. It was no less than they deserved.

The inspiration continued. There was a scrum won against the head that ripped momentum from Parramatta and moments later, Ken Maumolo was in to extend the lead, aided by a superb sideline conversion from Hastings.

The Eels might have been rattled, but they’ve still got bags of ability. When Moses doesn’t do it, Dylan Brown does.

The Kiwi playmaker came up with a trademark left foot step to get by Zane Musgrove, allowing Reed Mahoney to waltz under the posts.

The pace of the game was growing, and taking a toll. Jake Simpkin, enjoying one of his best games for the Tigers, departed on a stretcher with a nasty-looking ankle injury, joining Reagan Campbell-Gillard, who had also left with an ankle problem.

Maumolo was forced off with a knee issue and Tom Opacic followed him after a fend from Leilua to the face.

With troops dropping everywhere, Moses was again the man to make the difference. Daine Laurie had been looking very shaky under the high ball, failing to catch two spiral bombs, and Moses kept going back to the well.

He sent up a steepler that Laurie couldn’t leave alone, but was beaten in the air by Bailey Simonsson, who batted to Marata Niukore to level the scores.

The tension ratcheted up further. David Nofoaluma looked for all the world like he had regained the lead, but a combination of Oregon Kaufusi and Hayze Perham kept the ball up. With the Tigers on the last, Jock Madden threw into touch.

The panic was everywhere. Wests could have set up for a drop goal – Hastings pointed at the posts with ball in hand before dropping a man in towards the uprights – but was then given the ball too far wide. His grubber went dead and gave the Eels a seven tackle set.

Parra got to their kick, but were too far out for an attempt: Moses bombed again, Laurie left again, but the bounce went the Tigers’ way. When the they got into range, again Wests didn’t take the shot and grubbered dead. It was chaotic, almost idiotic play.

The Eels finally did get to their attempt, but Moses missed with 60 seconds to play. It looked for all the world like the Tigers would take it to golden point, but Hastings had other ideas.