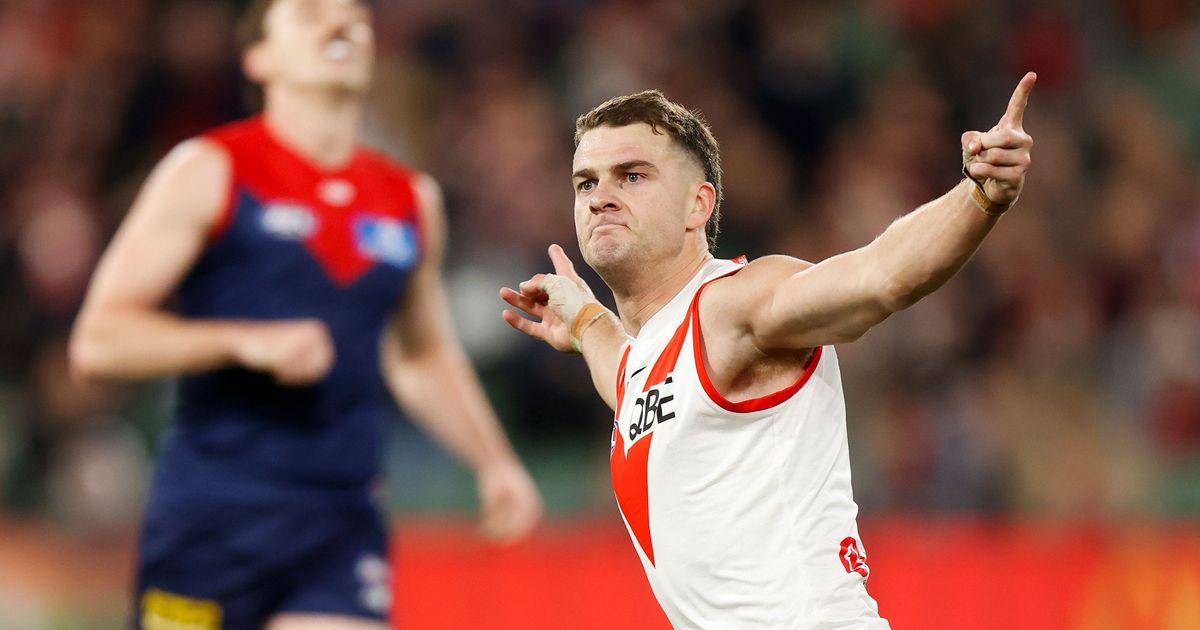 In what was a clear contender for match of the season thus far, Melbourne and Sydney threw everything at each other throughout a pulsating two hours of action – but it was the visitors who came to the premiers’ once impenetrable fortress and got the job done.

The Swans stood up when it mattered throughout a finals-like contest which ultimately came down to moments, kicking four goals to the Dees’ one in the last quarter to come away with a 12-point win and make an almighty statement at the midway point of the campaign.

After Max Gawn kicked the first goal of the last quarter to give Melbourne a 13-point advantage, Sydney piled on the majors, with Errol Gulden’s bomb with under five minutes to go giving the visitors the lead before Tom Papley’s snap sealed the 10.13 (73) to 9.7.(61) win.

Even without the suspended Lance Franklin, Sydney found an avenue to goal, as Sam Reid and Logan McDonald stamped their authority up forward booting three goals apiece, while Callum Mills led the charge in the middle with 26 disposals, seven marks and nine tackles.

Melbourne, on the other hand, is human after all, falling to back-to-back defeats for the first-time since round 16, 2020 and its 10th loss in 12 games against the Swans.

However, when the Dees kicked six of the first seven and raced out to a 26-point lead in the first minute of the second term, it seemed as if the reigning premiers would cruise to victory and ensure last weekend’s loss was nothing more than a minor hiccup.

The Swans had other plans, upping the ante around the contest (27-16 second-quarter tackles) and turning their first-quarter wastefulness around enough to give themselves a two-point lead at half-time off the back of a five goal to two second quarter.

While the first half resembled a frenetic, end-to-end basketball-like contest, the second half was well and truly an arm-wrestle.

Simon Goodwin’s charges, however, could’ve easily gained the ascendancy had they not come down with their own case of the yips in front of goal during a third term where they kicked the only goal of the quarter but added another five behinds.

In the end, the misses in the third term came back to bite them as Sydney stormed to the finish line, improving their record to 8-4 while jumping into sixth spot heading into the bye.

The Demons, 10-2, will be hoping to arrest their slide next-week, as they gear up for a blockbuster Queen’s Birthday clash against Collingwood next Monday.

Buddy-less Swans attack
There’s no one quite like Lance Franklin in the AFL and there’s not many, if any at all, who can replicate his impact when he takes the field. And when Buddy is absent, like he was on Saturday evening due to suspension, Sydney on most occasions feels the pinch. However, it was ‘the replacements’ who not only filled the chasm but won the day against Melbourne’s Steven May-less defence. With the Swans down by as much as 26 points early in the second quarter, veteran forward Sam Reid and youngster Logan McDonald took over, forging a sensational one-two punch after quarter-time to will Sydney back into the game with a combined five first-half goals.

Brown gets the nod
He’s the ultimate journeyman and he answered Melbourne’s call in their hour of need. With Tom McDonald withdrawn at the last moment due to ankle soreness, the ever-reliable Mitch Brown re-emerged from the wilderness to take up one of the key forward posts in the Dees’ attack. Despite forging a career as a more than capable forward option, Brown has struggled for the opportunities, playing his first game since round five last year. Unfortunately for the veteran, his impact on the game was negligible.

Petty battles on
If there’s one thing to be sure, Harrison Petty is going to be very sore on Sunday morning. Throughout a physical, smash and bash first half, the Melbourne key defender came off worse for wear on a couple of occasions with both his shin and shoulder requiring strapping after two separate incidents. The Dees, who were already without Steven May going into the game, couldn’t afford to lose yet another key defender, especially as Sydney’s talls started to gain the ascendancy and stamp their authority on the contest. To Melbourne’s benefit, Petty battled on manfully and was able to get through the game without his night ending prematurely.