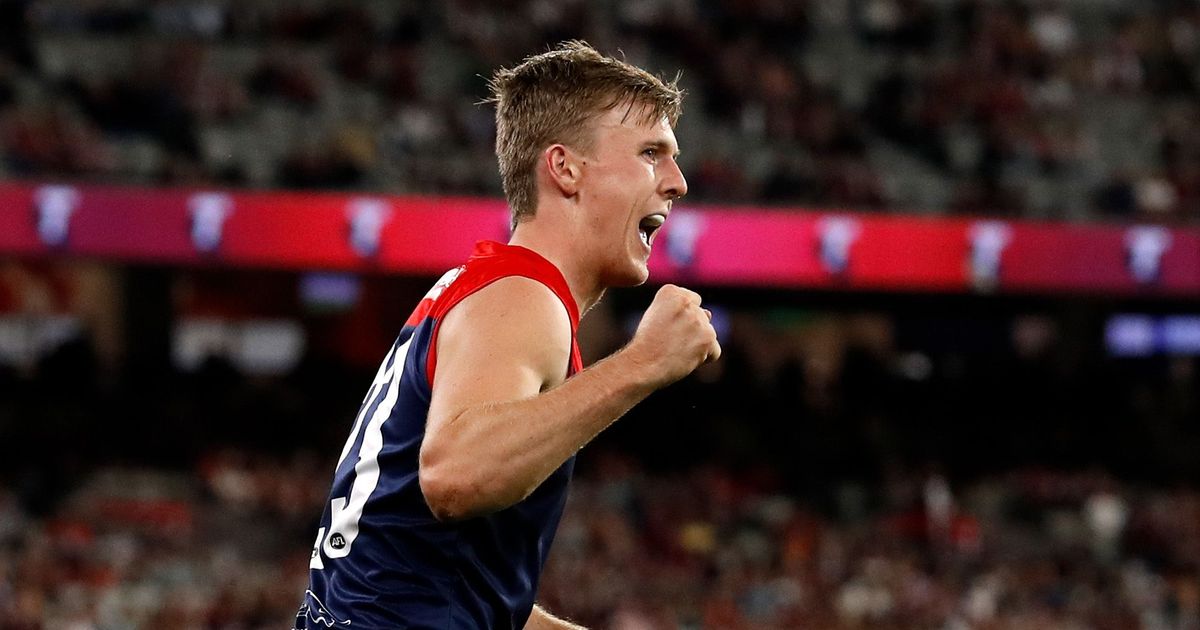 JAMES Jordon describes it as “the best seat in the house”. As Melbourne’s medical substitute for its last four games of 2021, including the historic Grand Final win over the Western Bulldogs at Optus Stadium, Jordon watched on as his team achieved the almost unimaginable, breaking the club’s 57-year flag drought.

He was the sub in round 23 and then again for the Dees’ qualifying final against Brisbane. When they got through to the preliminary final, he replaced defender Steven May in the third term after May left the game with a hamstring concern. About a week before the Grand Final, Dees coach Simon Goodwin told Jordan he was set to hold the role as substitute for the decider.

He didn’t get on the field as the Christian Petracca-led Demons romped home over the Bulldogs, but enjoyed every goal in their exhilarating second half and felt every bit part of the win, finishing the night with a premiership medallion around his neck. It also gave him the impetus that if the Dees got back there in 2022, he wanted to be on the field.

“You just have to be prepared for any situation. You have to come into the game thinking that you’re going to play and with the mindset that you could go on in the first minute or in the last quarter,” he told AFL.com.au.

“You’d obviously rather be out there but my position on that day was to be ready. I didn’t get to go on, but I couldn’t have been more happy for my teammates and seeing the joy and happiness that they had out there put a smile on my face.

Jordon has quickly become established inside Melbourne’s best side this year. He has played a range of roles since breaking into Melbourne’s side in round one last year, but has nutted out his prime spot on the wing in recent weeks since Angus Brayshaw moved to half-back to cover off an injury-hit Demons defence.

Jordon has averaged 21 disposals so far in 2022, had a career-high 27 touches in round four against Port Adelaide and last week kicked a goal from 20 disposals against the Giants as Melbourne kept alive its unbeaten start to this season. Unheralded externally, perhaps, but Jordon’s ability to run, work, compete, use his footy smarts and follow instruction has gone far from unnoticed inside the Demons.

“I’ve loved it. We’ve got one of the best wingers in the comp on the other side in Ed Langdon and I’ve learnt a lot watching the way he goes about it and the patterns he runs. I’m loving my time on the wing and I feel like I’m able to have an impact on the game out there as well,” he said.

The 21-year-old wasn’t an overnight sensation for the Demons last year, nor has much of his story been conventional, having been something of a surprise pick for the Demons as the No.33 selection at the 2018 NAB AFL Draft.

He had played in the NAB League with the Oakleigh Chargers, school football with Caulfield Grammar and also had some senior experience at Yarrawonga, with Melbourne one of six clubs to chat to him through his draft season.

Melbourne’s recruiting boss Jason Taylor narrowed in on him as the draft grew closer, with Jordan’s fitness program late in 2018 showing his scope, and the club grabbed him six spots after selecting Tom Sparrow (both ended up premiership players three years on and are among the Demons’ batch of second-round draft stunners).

But Jordon didn’t feature at AFL level in his first two seasons, the second interrupted by COVID shutdowns and minimal second-tier football, and at the end of 2020 he was delisted and re-selected as a rookie as Melbourne, like other clubs, had to shuffle their lists.

It didn’t deter him, with Jordon going on to break into the Demons’ round one side last year and being a part of its 23 for all 25 games.

“I felt like I had a really strong pre-season and I felt that’s where it probably all started. Training against the likes of Clayton (Oliver), Christian and ‘Vines’ (Jack Viney) at match practice throughout the whole pre-season – I don’t really think there’s anyone better to come up against,” he said.

“I was able to have a really strong pre-season and that set me up for the whole of the year. I was pretty confident going in. I felt like I’d done the work and just needed that opportunity and I felt like once I got that opportunity, I’d be able to take it with both hands.”

He signed a two-year contract extension in April – taking him off the free agency list having qualified after being delisted – and snapped up a NAB AFL Rising Star nomination in round eight, with his versatility becoming a valuable resource for the Demons.

It was a versatility that lent him to being the substitute in the finals, with Jordon taking in as much as he could of the Grand Final build-up in Perth.

“It’s a pretty cool experience. I was just trying to enjoy it and take it as a normal game, even though obviously it’s something much bigger, but I tried to do everything in my routine. The hype around it is massive so I was really excited going in and I couldn’t have been more pleased with the result,” he said.

On Sunday night Jordon will again be in front of a big crowd. This time it is at the MCG in the Demons’ annual Anzac Day eve clash with Richmond, and this time he is entrenched in the starting 22.

“It’s a pretty special occasion and it’s a goosebumps kind of feeling when you’re out there and the Last Post is being played and the lights go out,” he said. “It’s an awesome night.”