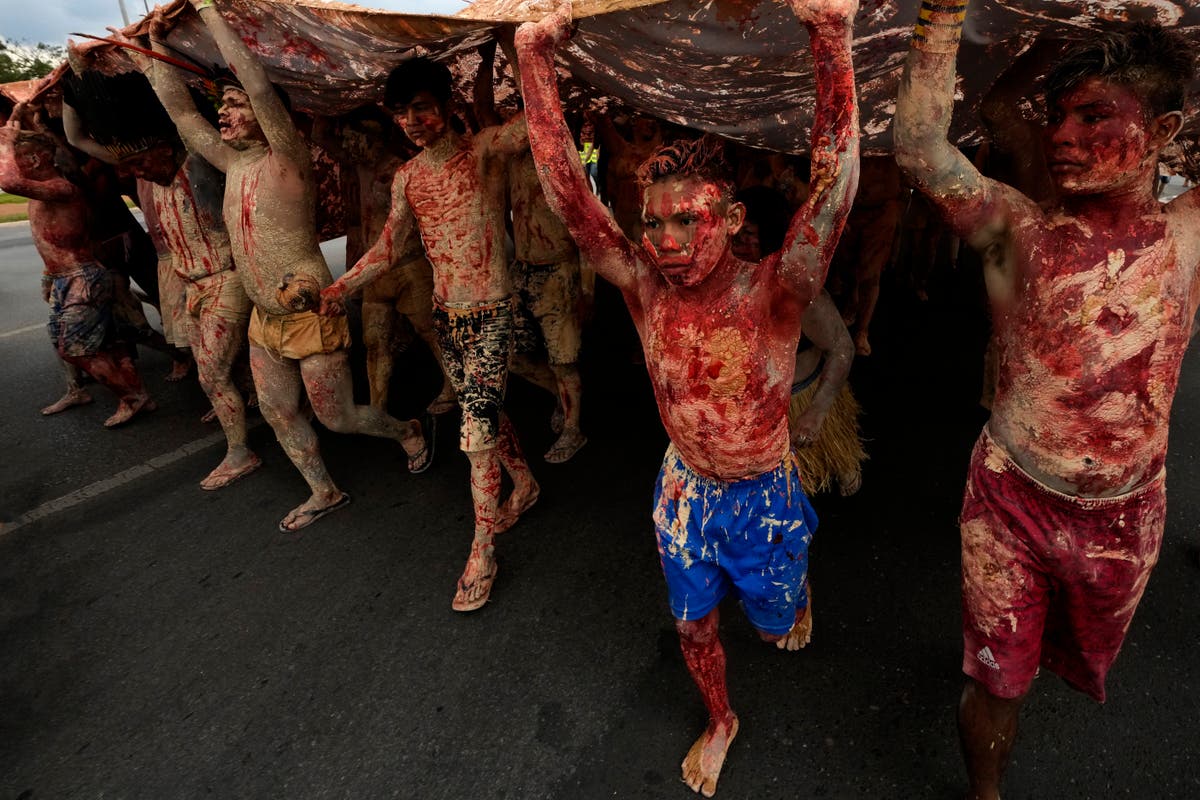 Some of the world’s biggest mining companies have withdrawn requests to research and extract minerals on Indigenous land in Brazil’s Amazon rainforest, and have repudiated Brazilian President Jair Bolsonaro’s efforts to legalize mining activity in the areas.

The Brazilian Mining Association (Ibram), which represents around 130 companies, conducted an internal survey of its members earlier this year, according to Raul Jungmann, its president. For the first time in decades, none of the companies have current research or mining applications for gold, tin, nickel, iron and other ores in Indigenous areas, he said. Neither the survey nor its results have been reported previously.

Members of the association, which accounts for 85% of Brazil’s legally produced ore, include mining giants Rio Tinto, Anglo American and Vale. The AP contacted all three companies. Rio Tinto confirmed it retracted its applications for research concessions in 2019. Anglo American did the same in March 2021. Vale withdrew its requests for research and mining concessions over the last year.

“Ibram’s position is that it is not possible to request mining and research authorizations on Indigenous lands unless you have constitutional regulation,” Jungmann said by phone.

Around two thirds of the applications were filed with the federal mining agency before the government officially demarcated them as Indigenous territory, according to a study conducted by geologist Tadeu Veiga, a consultant who also teaches at the National University of Brasilia.

The collective retreat comes as Bolsonaro insists Indigenous territories contain mineral resources vital to bringing prosperity to both the nation and native peoples. Brazil’s Constitution states that mining can only take place on Indigenous lands after getting informed consent and under laws that regulate the activity. More than three decades later, such legislation still hasn’t been approved.

Bolsonaro was pushing to change that even before he became president, as a fringe lawmaker. During his 2018 presidential campaign, he said deposits of the metallic element niobium, found under Indigenous lands, could transform Brazil into a mining powerhouse, but the proposal fell by the wayside after he took office. Available resources of niobium, used as an alloy for steel, are more than sufficient to supply the world’s projected needs, according to the U.S. Geological Survey.

Bolsonaro has repeatedly said the nearly 14% of Brazil that is within Indigenous territories is excessive, and that foreign governments are championing Indigenous rights and environmental preservation as a gambit to eventually tap the mineral wealth themselves.

“Interest in the Amazon isn’t about the Indian or the damn tree. It’s the ore,” he told a crowd of prospectors in capital Brasilia in 2019.

More recently, in March, he pressured Congress for an emergency vote on the bill drafted and presented in 2020 by his mining and justice ministries to finally regulate the mining of Indigenous lands. He said the emergency vote was necessary because of the war in Ukraine, which threatened crucial supplies of the fertilizer potash from Russia to Brazil’s vast farmlands.

With the law in place, “in two or three years, we will no longer be dependent on imports of potash for our agribusiness,” Bolsonaro said. “Agribusiness is the locomotive of our economy.”

Experts were quick to note, however, that most potash deposits in Brazil’s Amazon are not located in Indigenous territory, according to a study from Minas Gerais Federal University based on official data.

Critics have argued the bill’s primary purpose is providing legal cover for thousands of prospectors. The activity mushroomed in recent years amid repeated promises for regulation from Bolsonaro’s government, members of which held several meetings with representatives of prospectors.

The prospectors’ sites often grow over time, creating vast damage, destroying riverbanks, contaminating waterways with mercury and disrupting Indigenous peoples’ traditional ways of life. By contrast, industrial-scale mining in the Amazon produces deep scars in the forest, but mostly limited to the area of the deposit, as is the case with Carajas, the largest open-pit iron ore mine in the world, operated by Vale.

In March, while Bolsonaro’s parliamentary base tried to speed up the bill’s progress, thousands of Indigenous people and their allies protested in front of Congress, led by Brazilian singer Caetano Veloso. They soon found an unlikely ally: Ibram, the mining association, which in the past had kept a low profile.

Bolsonaro’s bill “is not appropriate for its intended purpose,” Ibram said in a statement issued days later, adding that regulation of mining in Indigenous territories “needs to be widely debated by the Brazilian society, especially by the Indigenous peoples, respecting their constitutional rights, and by the Brazilian Congress.”

Jungmann said his association issued the unusual statement, first, because it has decided to become more open and transparent following two mining accidents in Minas Gerais state in 2015 and 2019 that killed hundreds of people and contaminated waterways.

The appointment of Jungmann, a high-profile politician who has been a minister in two center-right governments, also reflects this shift.

Another reason, Jungmann said, is mounting pressure at home and abroad to adopt friendlier socio-environmental practices.

“We are not against mining on Indigenous lands,” he said. “However, we think the bill is inadequate, because it does not comply with the International Labor Organization’s Resolution 169, which demands free, prior and informed consent. Secondly, it doesn’t close the loopholes for illegal mining. Third, we want a project that preserves the environment, particularly the rainforest.”

“Prospecting, which kills and destroys communities, is a case for police, not an economic issue,” he added.

Bolsonaro’s proposal suffered another, international rejection Thursday when ecologist Philip Fearnside and five other scientists published a letter in the journal Nature warning that the war in Ukraine was serving as “an excuse for the destruction of the Amazon.”

Indigenous lands are essential for maintaining the ecological benefits provided by the Brazilian Amazon Forest, they wrote. “These lands protect more of the forest than federal protected areas.” The letter calls on mineral importers to ”follow through with possible boycotts to make it clear that Brazil’s irresponsible actions have consequences,” if the law goes through.

To Bolsonaro’s chagrin, lawmakers have thus far declined to put the proposed mining law to a vote. Jungmann said he has met with the presidents of both houses of Congress to explain industry opposition, as well as with the president’s Chief of Staff Ciro Nogueira.

In a speech to farmers on April 25, Bolsonaro rejected criticism from the Ibram and the Indigenous movement, alleging that mineral exploration on Indigenous lands would only occur with the approval of the affected tribe.

In an email, the Ministry of Mining called the mining regulation for Indigenous areas long overdue. The lack of regulation brings disorder and environmental damage, it said.

Ibram-affiliated companies pulling out of Indigenous territories doesn’t mean they or others will cease to mine the Amazon, or that conflicts with Indigenous people are a thing of the past.

Canada-based Belo Sun Mining Corp is trying the develop what would be the largest open-pit gold mine in Brazil’s Amazon rainforest. Nearby Indigenous communities claim they haven’t been consulted. Another Canadian company, Brazil Potash Corp, is fighting in court to implement a $2.2 billion project close to the territory of the Mura people, who fear the operation will affect their lands.

Neither company is affiliated with Ibram, which declined to comment about the cases.

In an emailed response, the regulator said that a withdrawal request goes through a clearing process before an application is officially inactive. Sometimes that can take years. ANM declined to provide details on specific applications. Ibram’s Jungmann says the agency needs to overcome its technical problems.

“Mining companies have shown growing attention to social and environmental governance principles. Shareholders and society demand it,” said Veiga, who has extensive experience consulting for such companies in the Amazon, as well as for non-profits. “And they (mining companies) never felt they were taken into consideration with Bolsonaro’s bill, which was interpreted as an attempt to legalize illegal mining.”