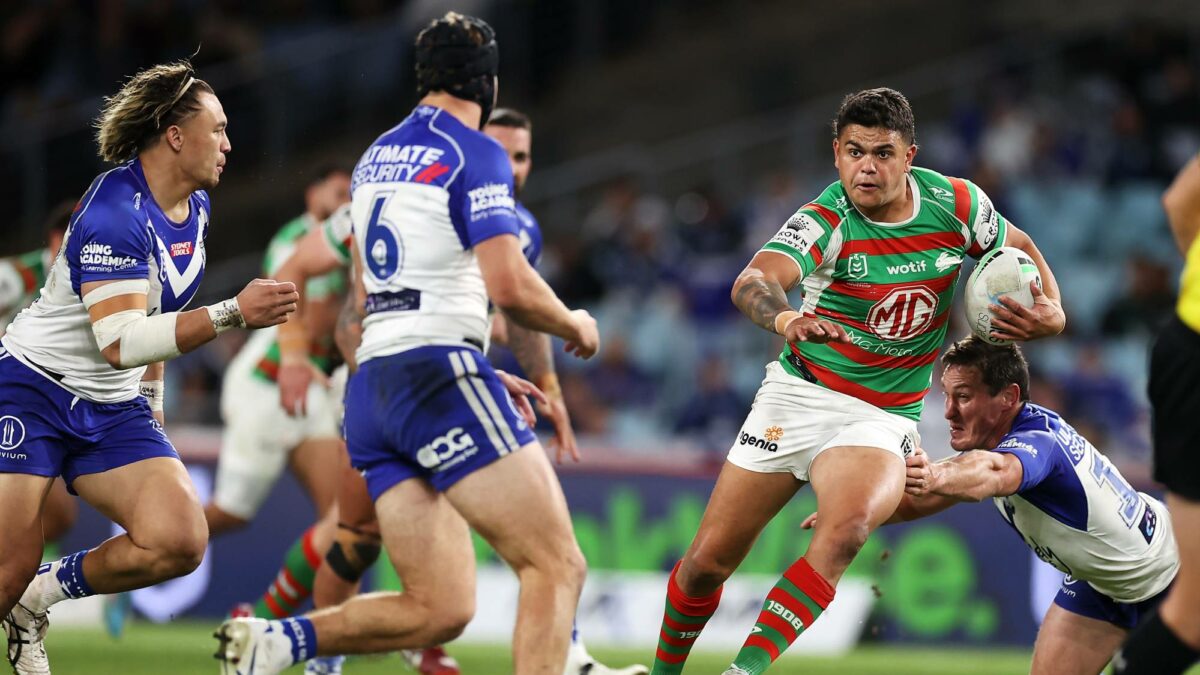 Latrell Mitchell has led South Sydney to their third consecutive victory, producing one of the best individual performances of the year to defeat the Canterbury Bulldogs 36-28.

Mitchell has had a massive effect on South Sydney since returning from his hamstring injury, and this was the best of the lot.

Missing captain Cameron Murray and hooker Damien Cook, both rested after Origin, the Bunnies needed leadership and got it from their star fullback: he managed a try and three try assists, but the bare numbers don’t do his performance justice.

He was clutch: the Bulldogs scored with 12 minutes to play to lead 28-22, only for the fullback to create two tries and win his team the game. Not only does he produce his own magic, he inspired Cody Walker and Lachlan Ilias to come with him, while Alex Johnston grabbed another hat-trick.

Since his return to the side, Souths have scored 30, 40 and now 36. With form like this, they will challenge anyone come finals time.

“I’ve built my career on big moments,” said Mitchell. “It comes naturally I suppose. Being a leader, people look to you for guidance at time. I’m starting to learn to bring the boys together, get eyes and get confidence.

“Tonight showed that. This week was a good build up, we knew they were going to come out tough and we had to put it to them tonight. It was a really good game, I enjoyed that battle and I seen a lot of character out of my players as well.”

Souths coach Jason Demetriou said he was impressed by his team’s character, and by his two leaders in Mitchell and Walker.

“For us to come back from behind several times during the game showed where this team is going,” he said. “We have some pretty important players to come back that will raise the bar again.

“Without Cam and Cookie, we needed Latrell and Cody to show up and when we were behind, he was the bloke pushing through that middle third. They both came up with some big plays to set the tries up.

“That’s what you want from your leaders. I spoke to them through the week about times in a season where those guys need to stand up. They’ve been doing that the last month and if they keep doing it, we’ll be in a good place come finals.”

It was a thrilling match, with both sides making the most of a dry track to produce a superb display of attacking football.

Both have been in good form of late, particularly with ball in hand, and combined for 12 tries between them tonight. This was not the result of bad defending, either: both chanced their arms, backed their ability and got their rewards.

Souths have looked like scoring points all year – whenever their completion rate didn’t get in the way – and the Dogs look reborn as an attacking unit under Mick Potter.

It’s hard to think that just a few months ago, they averaged around 10 points per game. Since Trent Barrett left, that number has doubled.

Josh Addo-Carr left the game in the second half with a glute problem, but that was a rare black spot for the Dogs. Despite the defeat, they more than played their part and simply came up against Mitchell in a mood.

Potter was happy enough with the way that his team attacked, but far from pleased with the defence.

“I knew the threat that Souths brought and they did exactly what we thought they’d do,” he said. “They executed really well and we couldn’t slow them down.

“I thought our boys played some good footy to counter, and scored five tries, but the problem is that they seven. It’s too many.

“The way we improved in the second half with ball movement caused Souths a bit of trouble, so I was happy with that, and we did improve our defence a little bit in patches, but the game is 80 minutes and we’ve got to be able to be resilient.

“We let ourselves down there with a couple of little plays. We need to improve quicker.

“If you’re still losing games, it’s not enough. I was more. I think there’s more in this team and I think we can get there, but the season is running short of games now. I don’t think it’s too far off.”

There had been fair conditions in Sydney all day – no longer the given that it once was in these parts – and the track was perfect for attacking footy.

Duly, the game started with a barrage of points. Ilias kicked low for himself and got the perfect bounce to beat Addo-Carr.

It was an emotional try for the young halfback who has endured being hooked, knocked out on the first play and the death of his grandfather in recent weeks.

The Dogs are made of resilient stuff these days and struck back immediately. Kyle Flanagan created an angle through a lofted long pass, allowing Braidon Burns – playing his first game in top grade since these two last met on Good Friday – to batter Johnston out of his way en route to the line.

Young centre Declan Casey was called up for his second NRL game this week after a late Covid-induced withdrawal for Aaron Schoupp.

After getting knocked out in his first game against Cronulla a few weeks ago, he had a happier afternoon, scoring his side’s second try in quick succession to reverse the early deficit.

The pendulum swung right back the other way. Souths thought they had scored through Mark Nicholls crashing onto a Siliva Havili pass, but Josh Jackson intervened with an excellent saving tackle.

It didn’t matter: moments later, Ilias weighted a pass that got Keoan Koloamatangi through the line, and the second rower produced a stunning inside offload to send Cody Walker behind the sticks.

The scoreboard was outpacing the clock through 20 minutes, and it was perhaps inevitable that there had to be a slowdown.

That wasn’t to say that the attack had gone away: Alex Johnston and Isaiah Tass went close on the Souths left edge and on the other side, Corey Waddell raced through a massive hole only for the bunker to say that it had been illegally created via an obstruction.

Waddell then made an error on his own 30m line and gifted Souths a good ball set to close the half. That left edge which had twice been thwarted would not be again, as Ilias, Walker, Mitchell and finally Johnston had hands on the ball for a trademark Bunnies try.

The second half started in similarly rapid fashion. Addo-Carr broke down the left edge and kicked inside, only to be halted by a hand to the face from Mitchell. Only the lack of force saved the Souths fullback from the bin.

From the resulting penalty, Joe Stimson piled onto a crash ball from Jeremy Marshall-King and brought the scores level again.

The Dogs were more than in the mood. Flanagan nicked the ball from Johnston on play one to move Canterbury back into position, and when Mitchell intervened to stop a Matt Burton kick, he was dumped into touch by Casey and Addo-Carr. Only dogged Souths defending kept them at bay.

The Bulldogs were brimming with confidence. They spread inside their own ten and Casey put a step on Tass to break the line. As he hit the backfield, he drew Mitchell and passed to Flanagan, who dumped on to Jake Averillo for a spectacular try.

Anything the Dogs could do, the Bunnies could do too. Kodi Nikorima slipped an offload to Mitchell and the fullback slalomed through the defence before planted a fend square on the chest of Addo-Carr, bouncing him out of the way and scoring with a grin. It was utterly dominant stuff from Mitchell.

It just kept coming. Canterbury spread on the halfway line on the last tackle and Burton got Waddell into space. He returned the ball to the five eighth, who found his partner Flanagan and then the onrushing Paul Vaughan for a barely believable try.

It was no surprise what happened next. Souths got the ball, ran it on the last and broke down the left: Walker dummied Jacob Kiraz, found Mitchell in a hole and he flicked inside to Tevita Tatola for yet more points.

Mitchell had decided that the game was his. He broke the stalemate with a long, no look, cutout ball that barely grazed the fingers of Kiraz on its way to Johnston to put Souths ahead.

There was more yet in the bank. Tass took a high kick in traffic, swivelled right on the touchline and flung a blind pass inside to Johnston to complete a hat trick.