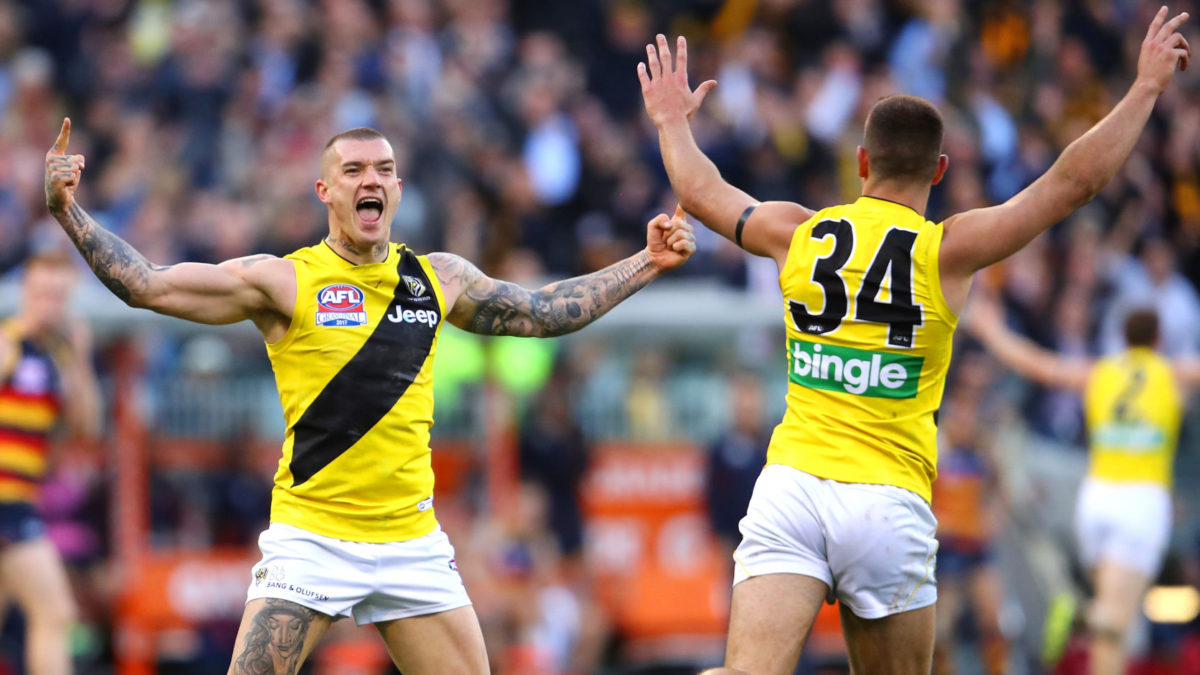 There have been a few watershed moments in my life so far: when I watched The Godfather for the first time; when Matthew Richardson kicked the winning goal of Dreamtime at G during yet another forgettable Richmond season, only to have it torn away from us by the new (at the time) hands in the back rule; and when Richmond won the 2017 premiership.

Up until that point I had grown accustomed to Richmond seasons that vacillated between abysmal and mediocre, very seldom breaking that threshold into good. Even when the seasons were ‘good’, like the 2013 season, when we finished fifth as a young and emerging team, it still ended in heartbreak.

I will never forget being at the MCG on that day in September, so excited to finally be in the finals for the first time in over a decade, only to have my heart ripped out by Chris Judd. Replete with Richie Aprile-style Manson lamps, his preternatural footballing ability killed me on that day.

Argument could be made that his performance in that particular third quarter killed the club’s confidence and ability to hold a lead or win a final until the radical rethinking of the Tigers in the summer of 2016 into 2017. He definitely killed my psyche as a fan to the point where even good things that happened to the club, like the nine-game run in 2014 to storm into the finals, I just assumed would end poorly. And obviously it did, with Trent Cotchin’s fateful decision to kick into the wind against Port Adelaide.

That aura of vincibility surrounded the Tigers for years and years, and it was kind of personified by Dustin Martin, the man widely expected to return this week against Collingwood. Blind Freddie could see that Dustin Martin was a freakish talent. For a man who wasn’t particularly well built, he was incredibly strong from his first game. Beyond that, he was so clean with the footy, had a penetrating kick, was dominant in one-on-one situations in the forward 50 and was an explosive athlete out of the contest.

Really there was nothing that he couldn’t do. Even in that final he kicked a beautiful goal just before half-time to put Richmond well ahead in the game.

But after that goal, he slapped his wrists together as a shout-out to someone he knew in prison at the time. How could his mind have been on that during a final? I could not fathom it. His priorities just did not seem to be in the right place. Like the club itself, he was all potential, but he refused to realise it. He didn’t run defensively (still doesn’t) and played in patches. Despite the glimpses, he was essentially a disappointment for the first five or six years of his career.

Beyond the on-field inconsistencies, the bigger issue was off the field. He arrived at the club a wayward soul by all accounts, shy but also cocky. He got into trouble off the field and became friendly with nefarious influences like Daniel Connors, another talented but wayward individual.

After the club nurtured Martin through multiple difficult phases, even living at the home of captain Trent Cotchin for a period, he had the gall to flirt openly with GWS once his contract was up. I was fuming at the time. I was in high school and remember telling anyone that would listen that I had had enough of his particular brand of infuriating talent. There was steam coming out of my ears. It was just another disappointment for a club that became specialists in failure, to quote Jose Mourihno. Even if Dusty said that his trip to GWS’s facilities was just business, I, like Sonny Corleone, took it very personally. Eventually, sanity prevailed and he stayed.

This article isn’t going to be a history lesson of the Tigers in the early to mid 2010s; the above is just setting the table for how I felt about the Tigers prior to 2017. I rode with every bump. Every loss hurt physically. The win against Sydney in 2014, punctuated by Dusty burning Ted Richards one on one and kicking a goal, was one of the best moments of my life. The loss against Port the following week was one of the worst. When players left, I sports hated them, to borrow a Bill Simmons term. If I were writing then, I would have wondered aloud if Dustin Martin was the antichrist.

But then in 2017 everything changed. We still snatched defeat from the jaws of victory midseason, losing heartbreakers to the Bulldogs, Fremantle and GWS in consecutive weeks, but we bounced back from those losses. There was a lightness around the club. Damien Hardwick and Cotchin, two figures who were normally stoic and serious, were more approachable and human. There was a shift in tone around the club that wouldn’t be fully explored until Konrad Marshall’s book after the premiership.

But more than anything else, Dusty was playing well week in and week out. He was an absolute freak show that year, winning the Brownlow and playing the best football I have seen from anyone maybe ever. You could make an argument for some of the Gary Ablett years in Geelong or even the early years at the Gold Coast, but the difference here was that Dusty put the whole club on his back and carried it like he was Atlas holding the world over his head. He didn’t even break a sweat.

He was every bit the player we hoped he would be. Untouchable at stoppages, clean with ball in hand and dominant as a pseudo key forward. His tackle-breaking numbers were legitimately absurd. Through that 2017 season he broke 68 tackles, 44 more than the next closest player in the AFL. Even his refusal to run defensively wasn’t really an issue, because everyone else defended frenetically and he was employed in what is now known as a ‘striker’ role, only playing in the forward half.

Then the finals came – the most terrifying time for any Richmond fan, especially given we were coming up against Geelong, a historically great club with a tradition of winning and to whom we had lost in Round 21 by 14 points. It was close for the first half, but then who stood up again? Dusty of course. He just abused Tom Stewart in the seminal one-on-one of the game on the wing and concocted the Dion Prestia goal that was the straw that broke Geelong’s back on the way to a nine-goal victory.

Against GWS in the prelim he was sublime, kicking four. My favourite goal was when he came out of the goal square, shook Aidan Corr out of his shoes and snapped truly. The game was over at that point, and after he kicked the goal he jogged to the bench. The MCG stood up and applauded a master of his craft at the peak of his powers.

Finally came grand final day, a day that I never thought would come as a Richmond fan. We were playing a dominant Adelaide side who had smoked us by 76 points earlier in the season and was replete with one of the dominant forward lines of the modern era. But it didn’t matter that they had all of those stars; we had the star that mattered: Dusty.

He ripped them to shreds as well and, alongside Bachar Houli and Alex Rance, was right there when the whips were cracking and put the icing on the cake with a goal conjured from nothing right at the end of the game.

The image I will never forget from that 2017 grand final was Dusty kicking his second goal of the game and tugging on the Richmond jumper that he so nearly jettisoned for the orange and grey of newly formed and totally soulless GWS Giants.

He was ours and we were his. He gave us what we never thought would be possible as fans of Richmond. He gave us contentedness.

Yes, we won two more premierships after that, Dusty dominant in both finals runs again. But they didn’t mean as much. Even this year, with Richmond playing patchy football, a year after we were cruelled by injury and ill-discipline, it doesn’t really hurt. It’s just fun watching the Tigers, and I hope we win, but if we don’t, it’s okay. We still have 2017.

Dusty is coming back this week after taking a month and a half off to deal with the loss of his father. No Tigers fan I know begrudged him that. He had given us everything – more than that, he had allowed himself to appear human occasionally, something that didn’t come naturally to the shy kid from Castlemaine with the freakish right boot.

I hope he plays well against Collingwood, and I wouldn’t be surprised if he did given his love for the big occasion and his now famous professionalism, but I don’t need us to win this game.

Honestly, I just hope he and the rest of the players that gave me 2017 are happy and content in their lives during and after football. I hope they can be as content as I have been since 2017. Asking anything else of them would be greedy. They’ve given me all that I ever could have wanted.