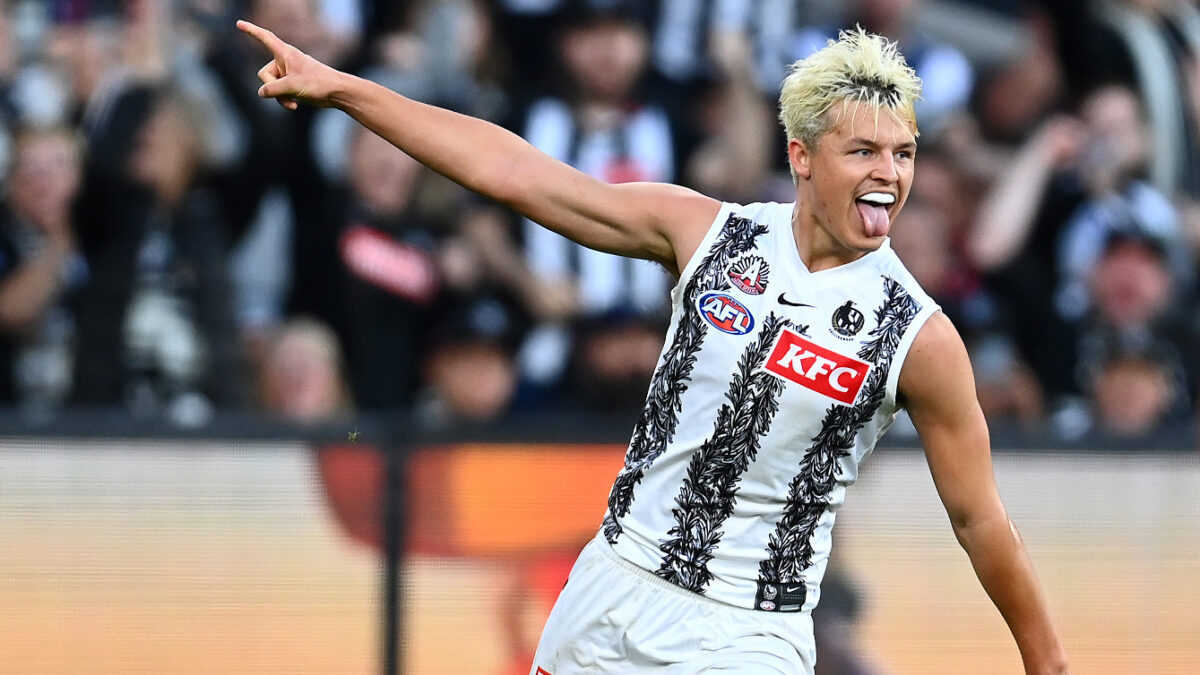 ANZAC Day at the MCG is always an occasion. As Mick Malthouse said during the week (a touch tone-deaf, yes), it’s victory or disgrace.

Essendon didn’t win, but nor were they disgraced. An eleven-point loss to a Collingwood side that simply couldn’t miss in front of goal was the sort of result that suggests the Bombers were in this match up to their eyeballs. They were.

In the end, though, you couldn’t really argue that the better side didn’t win. When push came to shove, the Magpies were calmer, sharper, and yes, more accurate; it made all the difference in the world.

Having been pilloried all week, this was a harder, more ferocious Bombers than at any point in their loss to Fremantle. It was clear that winning the ball in close had been a priority, and the results were spectacular.

By halfway through the third term, despite a narrow deficit, the Bombers were 21-12 up in clearances, having been bushwhacked 30-42 by the Dockers. They’d go on to win the stat handsomely, 43-31, while also taking a narrow contested possession edge, 123-114.

Central to that was Darcy Parish, one of the biggest scapegoats out of that Docker defeat. With his work rate called into question, he busted a gut from first siren until being slowed by an ankle injury midway through the final term.

He had 30 possessions at half time – the most by a player in the 2000s – until finally steps were made to curb his influence in close, with Taylor Adams and Patrick Lipinski paying him close mind until the end.

Still, with 44 disposals, 15 contested possessions and 12 clearances, critics were quick to point out his lack of penetration. Yes, he didn’t embark on any charging runs out of a stoppage; but he was key in winning the ball for the Bombers and kick-starting scoring chains.

Together with Zach Merrett, who put any suggestions his shock selection was a move borne of desperation to bed with 36 touches and his trademark run and carry. So, too, was Jake Stringer influential, his hamstring nary a concern with three goals and the occasional flash of trademark brilliance.

Sam Draper more than matched Brodie Grundy in close, though the Pies ruckman soldiered through a knee knock with aplomb to take the points via his exceptional work around the ground. But in the first half, eight of Grundy’s hitouts were sharked by Bombers – a story oft-told during Nathan Buckley’s tenure as coach.

For all the Bombers’ improvement at the coalface, turnovers and defending them remain major issues at Windy Hill. That they dominated in the centre, yet couldn’t convert that into any territory advantage to speak of, indicative of their chains of play breaking down. Too often, a long ball towards attacking 50 was chopped off by Jeremy Howe, a titan in defence all day with 13 marks, or stymied by a wayward kick.

Nevertheless, 17 marks inside 50 was a tremendous result: when it worked, they had options aplenty. When it didn’t, though, they weren’t capable of locking the ball in their attacking 50 and forcing repeat stoppages. The return of Anthony McDonald-Tipungwuti will do them wonders.

The Magpies, in contrast, scored 56 points from turnovers – and a staggering 44 of them came from chains that started in their defensive half. When the Dons turned it over, more often than not, the Pies made them pay.

As good as this goal from Jack Crisp in the second term was, it summed up the issue currently plaguing the Bombers – nobody even looked like stopping him as he waltzed through the middle, realised nobody was coming at him, strolled to 50 and finished clinically.

If he wins goal of the year for that, Ben Rutten should claim a share of the credit.

The Pies, meanwhile, showed the value of accurate kicking for goal. Having cost themselves with poor conversion in recent losses to Geelong and West Coast, the ledger squared up sharply this week: 15.3 from a side that had previously been more miss than hit in front of the big sticks is extraordinary.

Jack Ginnivan bombed them from outside 50, as part of an ANZAC Medal-winning five-goal haul. Ruck-forward Darcy Cameron threaded the needle from a tight angle

So what to make of it, then? The Bombers were better than against the Dockers, but it was the same problem in the end which cost them the game. On the rebound, they remain too loose; while their kicking is so far from the 79.8 per cent efficiency the stat sheet says it isn’t funny. They like to use the ball safely in defence, chipping their way upfield – but the minute the time comes to bite off a challenging kick, or drive the ball long, things break down with regularity.

As for the Pies, they either kicked like they should have against the Cats and Eagles, or got lucky with a freak day in front of goal. The answer is, probably, somewhere in the middle.

Just as they did last week against Geelong, the Hawks jumped out of the blocks with a devastating burst to leave a comfortable favourite shellshocked. They won five of the first six clearances, generating all of the first five inside 50s as a result.

And it wasn’t just death by weight of numbers: the Hawks were surgically precise moving the ball forward. Jai Newcombe, last week’s Rising Star nomination, was nothing short of fantastic, a series of bullet passes finding Jack Gunston, Chad Wingard and co. as the Hawks piled on the goals.

5.2 to 0.0 at the 16-minute mark, Sam Mitchell’s men appeared to have killed the contest. Then, it was as if the Swans realised, ‘Wait a second. We’re better than this.’ Because the rest of the match could not have been any different.

It started at the source – the Swans were level in clearances by halfway through the second quarter, and would end comfortably in front (41-28), while also dominating the inside 50s (68-42). Disposals, centre breakaways, contested possessions, hitouts… you name it, the Swans crushed the Hawks, despite hardly touching the footy in the first half of the first term.

The key architect in everything was Callum Mills: if there’s been a better individual game so far this season, I haven’t seen it. Incredible in close – some of his extracting handballs to teammates were reminiscent of Swans teammate Josh Kennedy in his pomp – but working hard enough around the ground with eleven marks and always providing an option, there was nothing he didn’t do.

He’d finish with 37 disposals – 23 of them kicks – 17 contested possessions, six clearances, gained 660 metres, and kicked the Swans’ first goal to ignite them. It was a one-man rampage.

Oh, and he also curbed the influence of Tom Mitchell at stoppages after a hot start. He literally did it all.

That the Swans took until the final fifteen minutes to rip the game apart, kicking the last eight goals of the game to storm away after only hitting the front at the 16-minute mark, came down to two things: the Swans’ shoddy kicking for goal, and the Hawks’ immaculate team defence.

Denying the Swans their trademark run and gun, pinpoint-passing game through midfield, long bombs were dealt with by the Hawks as they’ve done all year. James Sicily remained a formidable foe to get past in defensive 50, while neat ball use from the likes of Jack Scrimshaw and Will Day prevented the sort of backline turnovers that have plagued so many teams this week.

Of course, when Lance Franklin is having one of ‘those’ days in front of goal, kicking 3.4 and lucky to get there, you can afford the occasional lapse. Especially with Isaac Heeney, so deadly all year, brilliantly handled by Blake Hardwick until the Hawks’ defence cracked under sheer weight of numbers in the final term.

At the other end, the devastating loss of Paddy McCartin to another head knock – thankfully, the club is optimistic he can return soon – was hardly felt: the Swans just weren’t required to defend much at all in the final term, such was their dominance in midfield.

When the match was done, the Swans padded their stats: Chad Warner was everywhere in the final term with nine touches and a goal, while Justin McInerney, Will Hayward, Ollie Florent and Ben Ronke capitalised on some newfound space in attacking 50 as the Hawks’ defensive structure completely broke down. The run of Changkuoth Jiath out of defence was sorely missed: without him, Hawthorn struggled all day to exit defensive 50 with any dash, allowing the Swans to wriggle back into the game bit by bit.

It told that for all their organisation, the Hawks remain an ordinary side exceptionally well-coached by Mitchell: another year learning his game plan and getting miles into the legs of Day, Finn Maginness and a host of other emerging talents, then this side could explode up the ladder.

The journey is ahead of them: the Swans, meanwhile, are already nearing their destination.