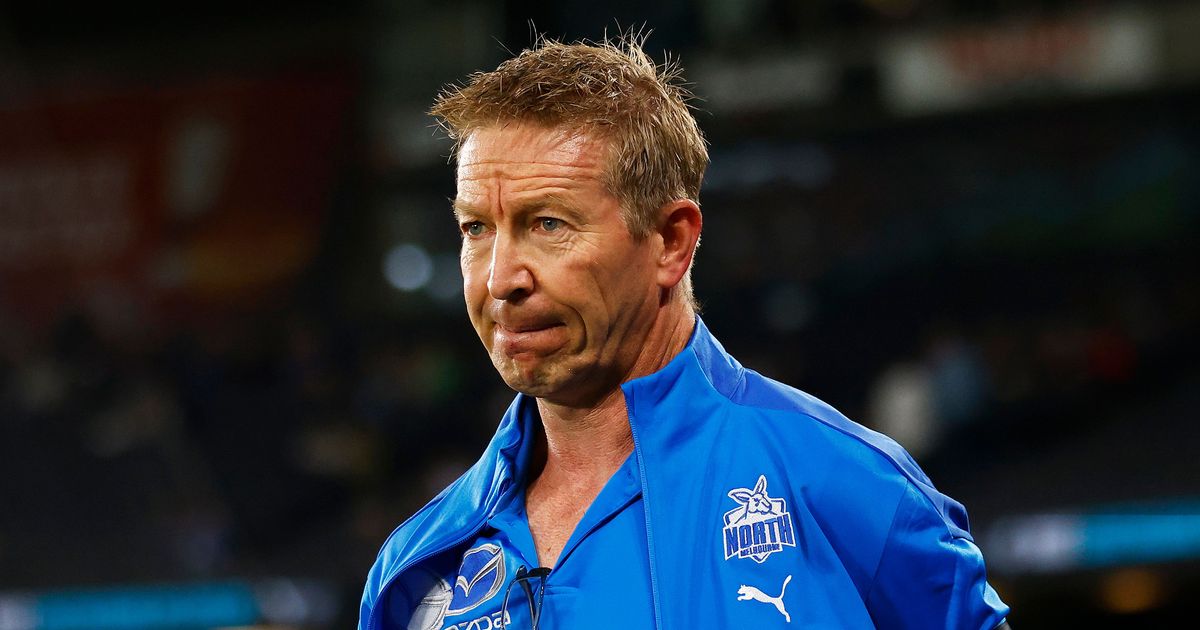 NORTH Melbourne coach David Noble has rejected suggestions the club has changed its game plan in recent weeks, underlining his belief that his young team is not far away from clicking this season.

Noble also said the Kangaroos had “seriously moved on” from a round three incident where he apologised to his players for delivering a stern post-match address, saying he is still learning what actions will prove most effective to motivate his developing side.

The second-year coach walked back a dressing down of his playing group that was delivered immediately after North’s 108-point loss to Brisbane in round three, but he said it has since provided him with a valuable opportunity to learn and grow.

“We can’t ask the players to have a learning environment if we’re not going to be up for that ourselves,” Noble said on Wednesday.

“The intention was correct. I believe there is still a place for being direct and firm with your playing group. The timing and the delivery … it was probably not the right time. We all get emotional at that point in time.

“I thought we’d had a really good day in the box. We were really methodical in how we coached. But then it just got the better of me at the end of the day and I’ve got to be better at that.

“That’s the vulnerability that we want to create. Vulnerability is good in leadership. We’re asking our players to be vulnerable as well and for us to display that is a great indication that we’re comfortable enough to do that collectively.”

Reports earlier this week indicated that North Melbourne had recently changed its tactical approach in the wake of six successive defeats this season, a claim that Noble strongly denied.

“It’s an interesting one … that’s not correct,” Noble said.

“I’m not sure where that information has come from, but I haven’t had players come in and say we’re changing the game plan.

“We’ve narrowed our focus on some key elements of our game plan … contested ball, our defence. But I want to be really clear, we haven’t changed our game plan and I haven’t had players come in and say we have. That is incorrect.”

North Melbourne lost its first eight games of Noble’s maiden season in charge last year, before turning things around in round 15 thanks to a streak of three victories in its next five matches.

The Kangaroos coach said he thought a similar turnaround in the side’s fortunes was fast approaching this year, despite the rebuilding outfit starting the season with a disappointing 1-7 record.

However, North Melbourne might have to attempt to reverse its losing ways in Tasmania against Port Adelaide this weekend without No.1 pick Jason Horne-Francis, who trained away from the main group on Wednesday.

“Some of the pieces that we’re chasing … when you play good teams, they don’t give you many outs. Our turnovers and our ability to control the ball for longer periods, I think would help that.

“We want to play with some more speed, we want to try and change the angles from time to time. We’re seeing signs, but we’d like to see more. We’ve just got to keep nailing the process.

“I mentioned that last year, which got me a bit into trouble too in regard to what that looks like, but it is fundamental to how you’ve got to move forward. We’re hoping that it’s not too far away, but the biggest thing for us is to do it quarter-in and quarter-out.”